There is a number of new tactical air-to-ground weapons was permitted for export during last two years in Russia. The most interesting in my opinion are 'Bazalt' PBK-500U (the functional JSOW analog) and MPK modules for broad spectrum of bombs (JDAM's functional analog).

PBK-U has SPBE-K sub-munition self-guided elements. As the 'Bazalt's peoples on MAKS-2009 explained me, the principle of guiding of that elements is just the same as 'Smerch's cassette anti-armor self-guided submunition elements have. They also said, that no special modification of hardpoints needed, so any fighter jet, compatible with standard Russian munitions can use this new high precocious kit of weapon. They hit broad class of IR or radio-contrasting targets like armored vehicles, anti-aircraft systems, communication and control centers. It can be monoblock too. The mass of the cassette bomb is about 500 kg, length 3100 mm, dia 450 mm. It can be launched from the altitude 100- 14,000 m, with the speed 700-1100 km/h, with maximal range of 50 km. One RBK-U kit is used to destroy 6 units of tanks or other armored vehicles. For initial guiding RBK-U has GPS/GLONASS and inertial systems of orientation with 'fire and forget' principle.

Since RBK-U has relative simple aerodynamic characteristics, it's range is well behind JSOW's one, but it makes RBK-U more standardized and cheaper for production. While the cost of different JSOW's mods is between $282-720 thousands.

The old elements SPBE-D is in average fit the American and Israeli analogs, wile the newest SPBE-K is much more progressive since they are able to effectively seek even IR 'cold' targets. They have also an ability to distinguish between fraternal and enemy tanks! Concrete building penetrating elements BETAB-M are better than American counterparts too. ('Take Off' journal, 2008, Sep).

They better for massive use than regular air-to-ground missiles, because they are much cheaper and allow simultaneous attacking a number of targets. When equipped with high-energy engine PBK-500U cassette munitions will have a range as the American JSOW-ER has (up to 500 km).

The new MPK modules, parallel to JDAM, are fit any standard Russian and Soviet bombs. While American JDAM needs plant assembly, Russian MPK modules can be assembled just in AF units. According to the developer, for destroying the same target with regular munitions of same caliber would be needed 10 times more bombs. The MPK warload is as 70% of its total mass, while this figure is only 15-20% for regular air-to-ground missiles.


There are 3 level of MPK modules:
1) Most simple aerodynamic supplement, which allows use the bombs from 50-100 m altitude on the range of 6-8 km.
2) With additional guiding block the range will be 12-15 km without problem in targeting.
3) Additional GPS/GLONASS navigation for range 40-60 km.
4) Addition pulsatory engine for 80-100 km attack range
- The cost of each bomb with the MPK module is however in different variants between 5 to 10 time higher of a cheap dumb bomb. 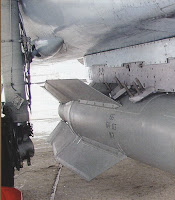 The 'Tactical Missiles Corporation' is a manufacturer of the 'big bad boys' like Kh-59 long range air-to-ground missile and KAB-1500 guided bomb. During last couple of years a number of new lethal modifications of these weapons were offered for Russian allies. The new weapons have modular structure with changeable warheads, longer range and better defense against jamming.

It's known from other sources Kh-59MK2 can have penetrating or cassette warhead (320 and 283 kg). Kh-58UShKE has shorter folded wing for use from internal bays. It hits radars working in 1.2 - 11 GHz A, A', B, B', C diapasons, with preprogramming option for guiding. The range of Kh-58UShKE is rised from 200 to 245 km. Speed - 1200 m/s. The broad using of satellite navigation in both GPS abd GLONASS standards are implemented. This is an interview with the Director General of the Tactic Missiles Corporation Boris Obnossov in Russian English language 'National Defense' issue 1, 2009.

In addition to what mr. Obnossov said, the Tactical Missile Corporation now offers the new variant of Kh-31 family with 2 – 2.5 times longer range: Kh-31PD antiradiation missile. It's compatible with any 4th gen. Russian designed fighters, including Su-30MKI, MiG-29 and MiG-35. 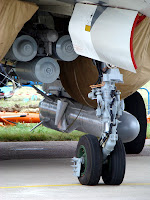 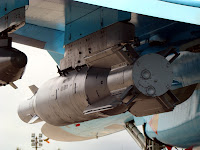