Russian President Vladimir Putin's right-hand man said in an interview today on ABC's "Good Morning America" that current relations between Russia and the United States are "maybe even worse" than the Cold War.

"It has no evidence at all," he said of the claims. 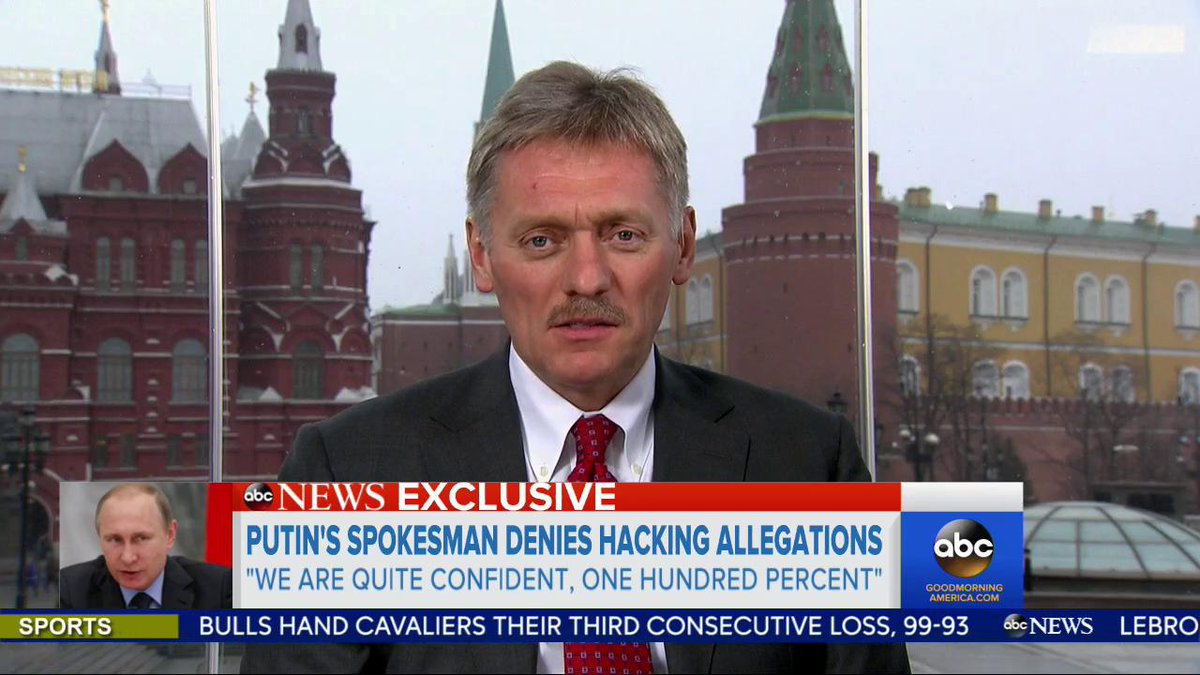 Peskov pointed to then-President Barack Obama's sanctions against Russia in late December in response to the alleged election interference as one reason for relations between the two countries being "maybe even worse" than during the Cold War.

On Dec. 29, Obama announced in a statement "a number of actions in response to the Russian government's aggressive harassment of U.S. officials and cyberoperations aimed at the U.S. election."

The actions included the expulsion of 35 Russians identified by the U.S. as Moscow intelligence operatives and sanctions against five Russian entities and four individuals for alleged cyberassaults on Democratic party operatives and political organizations during the presidential campaign.

"Is it friendly? I'm afraid no," Peskov said of the actions. "It's not friendly. It's not legal in terms of international law. So, of course, it was a very significant damage for our bilateral relations organized as a farewell parting by the then-administration in Washington."

Although Peskov flatly denied any Russian interference in the election, he acknowledged that Russians generally saw Trump's candidacy for president more favorably than that of his Democratic rival, Hillary Clinton, because of the real estate mogul's remarks during the campaign about the possibility of improving relations with Moscow.

The Kremlin spokesman said that however bad relations are now between Russia and the U.S., they could improve.

"I think if two presidents meet each other, if they exchange views and if they decide that they want to reestablish a dialogue, then there will be a chance for our bilateral relations to get better," he said.

U.S. intelligence agencies released a declassified report in January concluding that Putin ordered a campaign to influence the 2016 election in favor of Trump.

"We assess Russian President Vladimir Putin ordered an influence campaign in 2016 aimed at the U.S. presidential election. Russia's goals were to undermine public faith in the U.S. democratic process, denigrate Secretary Clinton and harm her electability and potential presidency," the report reads, referring to the Russian government's "longstanding desire to undermine the U.S.-led liberal democratic order."

"We further assess Putin and the Russian government developed a clear preference for President-elect Trump," the report continued, saying Putin nursed a "grudge" against Clinton "for comments he almost certainly saw as disparaging."