New Delhi: India's old ally Russia has come to the support of New Delhi saying its Nuclear Supplies Group (NSG) application cannot be linked to that of Pakistan. The Russian backing comes even as China continues to oppose India's membership.

According to a report in Times of India, Russian deputy foreign minister Sergey Ryabkov told his Indian counterpart S Jaishankar, "We (Russia) recognise that at the moment there is no unanimity on Pakistan's application and that the same cannot be interlinked with India's."

"We know about the difficulties involved but unlike some other countries, who only speak, we are making practical efforts...we are discussing it with China at different levels," he was further quoted as having said.

China has been opposing India's membership to the 41-member group citing that it will jeopardise China's national interest.

This is not the first time Russia has extended support to New Delhi's push for NSG membership. India has earlier approached Russia seeking its support in India's NSG membership and has been assured by President Vladimir Putin that Moscow will interfere with China to push India's membership.

The NSG membership, like the Wassenaar Agreement and the Australia Group is important as India aims to expand nuclear exports in the coming years. NSG membership will thus instill confidence in countries wanting to invest in nuclear projects in India. The membership will also boost India's international clout putting it in the league of nations involved in shaping decisions pertaining to larger, worldly strategic matters.

Russian Foreign Minister Sergey Lavrov and Minister of Foreign Affairs of the People's Republic of China Wang Yi will visit India on December 11. 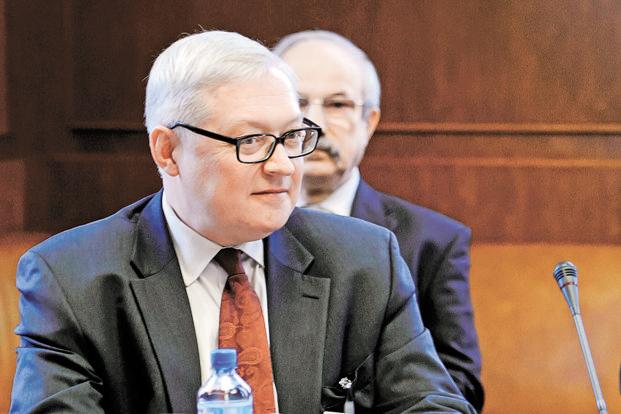 India, he acknowledged, had an impeccable non-proliferation record while Pakistan could not claim the same qualifications for membership of the club that sets the rules for global nuclear commerce.

The comment is significant given that India’s membership is opposed by China—now close to Russia. In recent years, Moscow, seen as close to India, has been cultivating ties with Pakistan. China and Pakistan, on their part, are declared “all weather friends.”

In India for foreign office consultations, Ryabkov said India could, meanwhile, gain admission into the Wassenaar Arrangement as soon as Thursday. The multilateral grouping, with 41 members that sets the rules on export controls for conventional arms and dual-use goods and technologies, is currently meeting in Vienna with deliberations set to conclude on Thursday.

“We have discussed India’s prospective NSG membership during our exchanges this morning (Wednesday). Russia is a firm proponent of India’s membership,” Ryabkov said, adding India’s credentials are very “impressive” and “impeccable.”

“We are talking on this to everyone including the Chinese,” he said, adding that India’s entry into the grouping should happen “sooner than later.”

“We recognize the fact there is for the moment no prospect for any unanimity with respect to the Pakistani application. So I don’t think it would be ever possible to interlink the applications of India and Pakistan to become members of the NSG,” Ryabkov said.

But the Russian deputy foreign minister stressed on the need for consensus on admission of new members—in seeming agreement with the Chinese position. “We don’t think the removal of the consensus rule will help any of the substantial issues but it may well rock the fundamentals of this (NSG) structure. So the only way forward is to make sure that the Indian case is addressed fully and everyone is convinced that there can be no question put before the issue of the NSG membership of India,” he said.

India has been seeking entry into groups like the NSG and the Wassenaar Arrangement in a bid to join the rule-making bodies rather than being a bystander. Membership to these groups is by consensus, as in the NSG. India had applied for NSG membership last year, but its bid is primarily being blocked by China, which maintains that the signing Non-Proliferation Treaty (NPT) is a prerequisite for entry into the bloc.

India is a member of the 35-member missile technology control regime or MTCR, which it joined last year. Membership in other groups like Wassenaar and the Australia Group would give India a chance for closer interaction with member states and also hold up its credentials, despite not being a signatory to the NPT.
http://www.livemint.com/Politics/Kv...s-for-NSG-membership-are-impeccable-says.html
You must log in or register to reply here.
Similar threads
It's time for free trade pact with Russia, says India
Russia says fake news about US naval team visiting INS Chakra N-Sub was planted by French lobby
Iran says negotiating with Russia for Su 30 fighter jets
Ex-Spy Says Western Intelligence Focuses on Russia, Ignores Terrorism
Share:
Facebook Twitter Reddit WhatsApp Link