MOSCOW. (RIA Novosti military commentator Ilya Kramnik) - Seventy years ago, on December 19, 1939, the Soviet government's Defense Committee issued a resolution approving the supply of several new types of automobiles and armored vehicles to the army. One of the latter was the T-32 track tank with a B-2 diesel engine.
The resolution also said that the new tank's armor should be strengthened and its visibility and armaments improved. The revamped tank was called T-34. When it was delivered to the army, few people thought it would be such an enduring design.
A new design bureau led by Adolf Dik started working on the tank in 1937, but the chief designer soon fell victim to Stalin's persecution campaigns. He was replaced by Mikhail Koshkin, the designer of the plant that later manufactured the tank.
The T-34 fought its first battles during the Spanish Civil War (1936-1939). These battles showed that its 15-20 mm armor left it defenseless against 25-47 mm antitank guns. It had been decided that a thicker armor would increase the tank's weight and not allow the planned combination of tracks and wheels.
However, by that time the country could make chain tracks that lasted several thousand kilometers, allowing the designers to replace the wheels with tracks without affecting the tank's running performance. The T-34 tank was designed for offensive operations that involved long marches at a high speed.
In addition, it was decided to equip the tank with a more powerful 76 mm gun because the 45 mm gun proved insufficient against infantry and antitank guns.
On March 17, 1940, two T-34 tanks ran from Kharkov in Ukraine to Moscow, where they were presented to the Soviet leaders, including Stalin, in Ivanovskaya Square at the Kremlin. Koshkin, who led the march, caught pneumonia and died in the fall of 1940.
The tank had quite a few bugs and the production pace fell behind schedule. The army heavily criticized it, but the government did not discontinue production.
By June 22, 1941, when Germany attacked the Soviet Union, the Red Army had over 1,000 T-34 tanks. But they could not prove their worth in border clashes. The German army was superior to the Red Army on nearly all counts, including the number of troops, the quality of command and control, combat experience, and logistics, and therefore easily neutralized the Soviet Union's superiority in tanks.
The Germans noticed the T-34 in the fall of 1941, when Soviet tank brigades started delivering very painful blows to the German units weakened by months of heavy fighting. With good drivers and commanders, the T-34 tank quickly and convincingly demonstrated its fire and armor superiority, as the Germans grudgingly admitted.
The production of the T-34 was increased while the country's industries were still being evacuated to the eastern regions. Much was also done to simplify the tank's design, which helped roll out more tanks and form more tank units. Soon the T-34 became the biggest concern for the Germans, who had previously taken legitimate pride in their tanks.
Germany could not increase the production of tanks as fast as the Soviet Union did, and so decided to improve its medium tanks and design the new-generation Tiger and Panther tanks. At that time, the role of tanks was changing, and tank duels became increasingly frequent toward the middle of the war.
The Germans created unmatched tanks for such duels but failed to make up for their strategic deficiency relative to the Soviet tanks. As the number of Red Army and Allied mobile units increased, Germany started feeling increasingly constrained.
Soviet designers improved the T-34 to be able to stand up against Germany's new tanks. In late 1943, the T-34 was equipped with a long-barrel 85 mm gun whose munitions could slice through the armor of German Tigers and Panthers. The T-34-85 tank became the calling card of the Red Army, the fast symbol of victory that was kept as a monument in many liberated European cities.
A survivor, the T-34 tank remained on combat duty in the Soviet Union for 20 years after the end of World War II in 1945. It was also exported to other countries and fought valiantly in wars in Korea, Vietnam, the Middle East and in Africa.
Yet the most glorious page in the tank's history was the Great Patriotic War against Germany (1941-1945). This is a fact accepted not only in Russia but also in many other countries, including the Soviet Union's enemies who were nevertheless the first to declare it the best tank of WWII, and also its allies who said it was the world's best tank of all time.
The T-34 medium tank weighed 26 tons and had a crew of four, a speed of 55 km/h (34 mph), and a range of 115 miles.

First of all i would like to thank A.V. for this great article i have always supported that the T-34 was the best tank of WW2 far superior to the sherman.

"It was the most excellent example of the offensive weapon of Second World War." - General Mellentin.

Just two of many quotes that have praised the T-34 tank. This is a vehicle, which has become a legend as the tank that won The Great Patriotic War for the Soviet Union.

The T-34 tank was designed and built in the Kharkiv Tractor Factory in the Ukraine and the first T-34 tank was tested by successfully driving it 1,000 miles from Kharkiv to Moscow and back. Mass production began in July 1940 and 1,225 tanks were made before the German invasion came on the 22nd of June 1941. After the invasion production was transferred to East away from the threat of German bombing.

The T-34 was far superior to the German Panzers when it was introduced due to a variety of advanced concepts for tank design of the time. It featured a high velocity gun placing more emphasis on tank killing ability and its armour was very well sloped making it difficult to knock out. Also it had extra wide tracks, which improved mobility cross-country, and its diesel engine both gave it longer range and reduced the risk of fire.

The T-34 design evolved throughout the war: the T-34/76B had a rolled-plate turret; the T-34/76C had twin roof hatches instead of the one large hatch; from the winter of 1942/3 the T-34/76D introduced a hexagonal turret, wider gun mantlet and jettisonable exterior fuel tanks; the T-34/76E added a cupola on the turret for the commander and was of all welded construction; the T-34/76F Had a cast rather than welded turret; during the winter of 1943/4 production of the T-34/85 began and used the turret of the KV-85 tank which included an 85-mm main gun plus space for an additional crew member so the commander did not also have to fire the gun.

In combat the T-34 served in almost every role and with hand bars welded to the hull 'tank descent' troops were able to ride westwards with the advancing armour towards Hitler's Reich. Serving from the very beginning to the very end of the Great Patriotic War the T-34 changed not just the course of tank design but also the history of the planet through the actions of its crews.

After the Second World War the T-34 was widely exported and was still fighting in Africa in the 1980s. Then in the 1990s it saw action again in Europe (for hopefully the last time) during the Bosnian/Yugoslavian civil war - a true testament to a design that was half a century old. 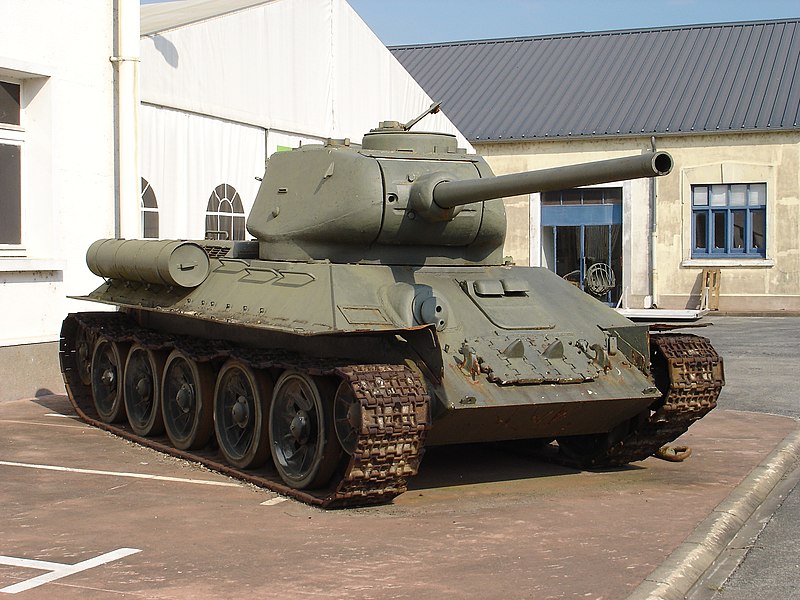 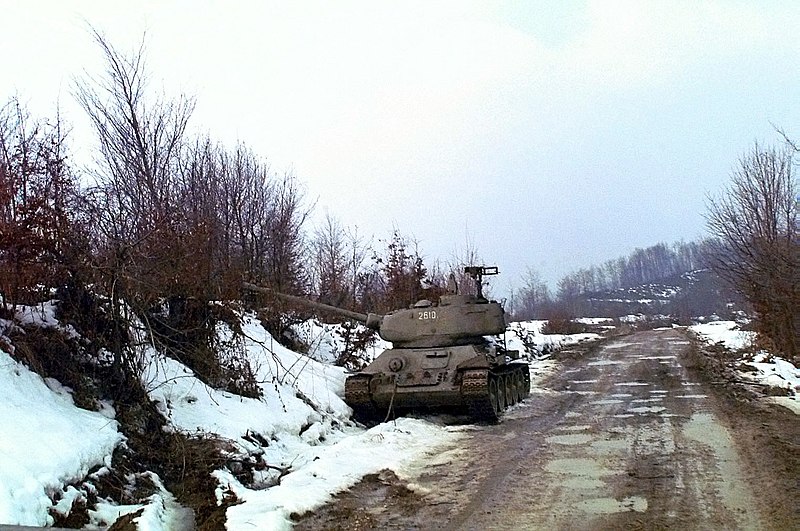 Monument to T-34 in front of theatre in Hrodno, Belarus.
http://www.youtube.com/watch?v=fVg6gFmuRlE
The military channel video rating the T-34 as the best tank of history
http://www.youtube.com/watch?v=BGmOrsmljY8
a Russian song(i like it even if i can't understand it) exalting the T-34
You must log in or register to reply here.
Similar threads
Russia, China to mark anniversary of friendship treaty during Hu's visit: ambassador
India should scrap AK 203 rifle deal with Russia
Russia Naval Capabilities to Deal with Future Threats Part 3
Russia Future Strategic Nuclear Weapons Capabilities.
Share:
Facebook Twitter Reddit WhatsApp Link