Russia, China Sign $400B Gas Deal After Decade of Talks

Russia reached a $400 billion deal to supply natural gas to China through a new pipeline over 30 years, a milestone in relations between the world's largest energy producer and the biggest consumer.

President Vladimir Putin is turning to China to bolster Russia's economy as relations sour with the U.S. and European Union because of the crisis in Ukraine. Today's accord, signed after more than a decade of talks, will allow state-run gas producer OAO Gazprom (GAZP) to invest $55 billion developing giant gas fields in eastern Siberia and building the pipeline, Putin said.

It's an "epochal event," Putin said in Shanghai after the contract was signed. Both countries are satisfied with the price, he said.

Gazprom Chief Executive Officer Alexey Miller signed the deal with Zhou Jiping, chairman of China National Petroleum Corp. The agreement is for 38 billion cubic meters of gas annually over 30 years, Miller said. While he declined to give a price, he said the total value would be about $400 billion.

"This is the largest ever contract for Gazprom," Miller said, adding the deal was clinched at 4 a.m. Supplies will start in four to six years, he said.

China may make as much as $25 billion in advance payments under the contract to invest in the necessary infrastructure, Russian Energy Minister Alexander Novak told reporters today.

Russia will invest $55 billion in the pipeline and the Siberian fields to feed it, Putin said, while China, responsible for a pipeline on its territory, will spend at least $20 billion, he said.

Russia and China will start talks on a second pipeline to the west of the initial route, Miller said.

Before Putin's trip, Russian officials had said the gas-supply agreement was closer than it had ever been. Talks, which started more than 10 years ago, repeatedly foundered on the issue of price.

"It's time we reached an agreement with the Chinese on this issue," Russian Prime Minister Dmitry Medvedev said in a Bloomberg Television interview in Moscow on May 19. "It is very likely that there will be a contract, which means long-term contracts."

The price should be "fair and totally comparable to the price of European supplies," Medvedev said in the interview before Putin's visit.

Gazprom's average price in Europe was $380.5 per thousand cubic meters last year. The price in today's contract is more than $350, Interfax reported, citing a person it didn't identify.

"The price seems to be at the level of European exports," Anvar Gilyazitdinov, who manages a $10 million portfolio of Russian stocks at Rye, Man & Gor Securities, said by phone from Moscow."It's adequate. Gazprom will be able to make money at that price."
Click to expand... 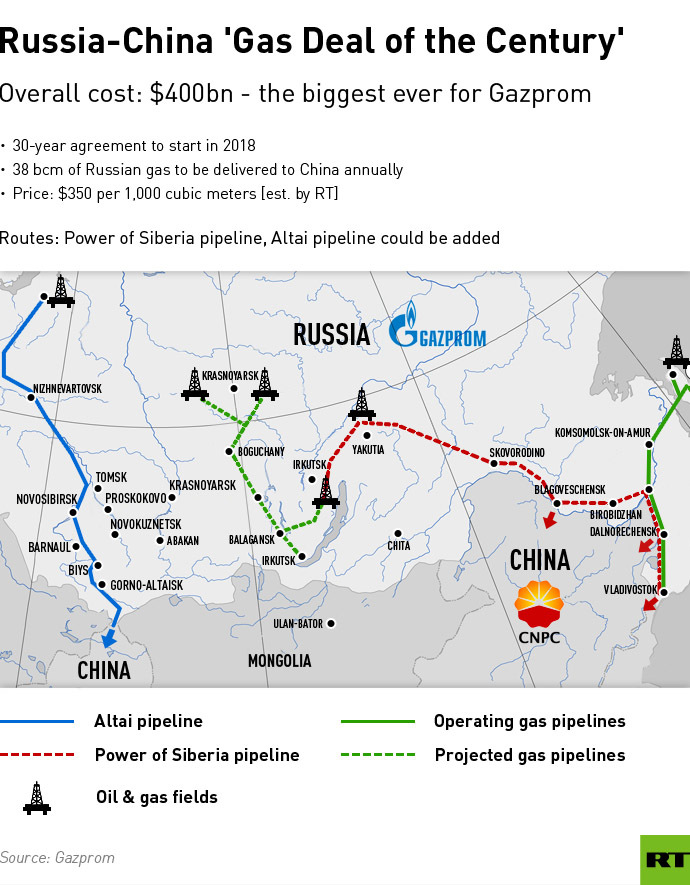 Final price is TBD but between $330-360 per bcm. For reference, the average price of Russian gas going to Western Europe is $380 per bcm with transit fees, and $330 per bcm once transit fees paid to EU partners are removed.

Good luck to Russia and China.

Sanctions against Russia would still hurt, but this agreement signals that the China market can limit the damage sanctions can do. The fact that pricing is comparable to Europe shows that China would not gouge Russia in its time of need.

Good Deal for Russia and China. Hope India and China can resolve their differences and the Altai pipeline will one day extend into India...

A much needed relief for the Russians.. The Chinese have proved their Economic might to the Americans by timing the deal...

Good luck to both the Nations.

nirranj said:
Good Deal for Russia and China. Hope India and China can resolve their differences and the Altai pipeline will one day extend into India...

A much needed relief for the Russians.. The Chinese have proved their Economic might to the Americans by timing the deal...

Good luck to both the Nations.
Click to expand...

We can lay pipelines across the Karakoram Pass. We have no border dispute there.
T

There is a talk of extending this pipeline from China to India, and it seems Indians have already sent feelers to China and Russia on this.

the 30-year deal of 400 billion USD seem a big deal,but the yearly pay is just only 13 billion USD,which is really not a big deal to CHina.

the "massive deal" is just a anti-USA pose .

So, this deal will salvage Russia from the negative effects of the European union sanctions and Russia closing the oil and gas tap to the EU?

It is a win win for China by default.

Ray said:
So, this deal will salvage Russia from the negative effects of the European union sanctions and Russia closing the oil and gas tap to the EU?

It is a win win for China by default.
Click to expand...

EU sanctions will not only hurt Russia, but also EU. It will hurt EU a lot more than Russia. It would benefit the US fracking companies, as EU will be their market. Moreover, once Russia starts to flood the market with cheap conventional gas, the US fracking companies risk being ditched by EU, or EU consensus breaking apart due to economic realities. In the long run, the biggest beneficiary is PRC, the greatest loser the US, and in the short run, the beneficiary seems to be the US, and Russia, just about slightly, negatively affected, but that loss is more than offset by Russia's gain of Crimea, and its Black Sea Fleet's base.
You must log in or register to reply here.
Similar threads
Russia signs contract to develop new heavy helicopter with China
Russia signs deal to supply oil to China
No Russia-China gas deal signing during Xi visit -Kremlin
China Signs $500 Million Deal With Russia For 123 AL-31FN Engines
Share:
Facebook Twitter Reddit WhatsApp Link