Indian telecom executive Abhinav Trivedi has travelled to remote villages and dealt with armed retailers in regions known more for bandits than their markets.

"We sold phone connections in areas where life moves at a snail's pace," says Mr Trivedi.

But business has been brisk.

His phone company boosted its revenues because of a rise in sales in these farming villages.

Experts say while the world economy is reeling under recession, India's continuing economic growth has been fuelled by its farm economy - Finance Minister Pranab Mukherjee has projected growth of "six percent plus" for the financial year to March 2010. 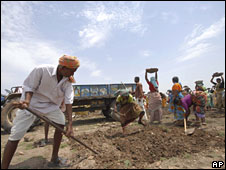 Government ministers believe the rural market will be a major driver for future growth.

No wonder corporate India is now deploying some of its brighter recruits to conquer these hinterlands.

Experienced, dynamic and university educated professionals like Mr Trivedi are at the forefront of the campaign.

"What I learnt at management school was of no use in these areas. It's the field experience that counts," says Mr Trivedi, who was rewarded with international holidays for his efforts.

He says he met people who had never travelled outside their village, had never seen a train and using a mobile was something they found technically challenging.

"I told them there are just two buttons - one green (to receive a call) one red (to disconnect) - and that worked for them," says Mr Trivedi.

Close to 70% of India's billion-strong population live in villages.

Over the last decade or so, the reach of television has ensured exposure to a more prosperous urban lifestyle and companies are learning fast to tailor their products to meet these new demands.

Ajay Gupta works for a website that deals with companies working in the rural sector and says more than half of the demand today is for fast moving consumer goods, especially in the telecom sector.

"There has been no evidence of recession on incomes in this sector," he says.

This, in turn, had helped kept the economy chugging along. 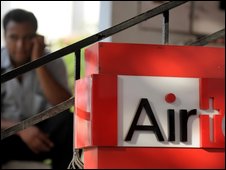 The mobile telephone market is taking off in rural India​

"It was a mix of both luck and some serious effort to invest in the social sector by the government that made it happen," says Mr Naik.

In the past four years there was an almost 15% rise in the Minimum Support Price (MSP), the price at which government purchases produce from farmers. This put more money into their hands.

The national jobs for work scheme has helped as it generated employment in the rural non-farm sector as well.

But can the rural economy continue to thrive after a number of states have been hit by drought?

Analysts like Gopal Naik say despite the drought in certain areas, villagers living off irrigated farms would be enough to earn, spend and sustain growth.