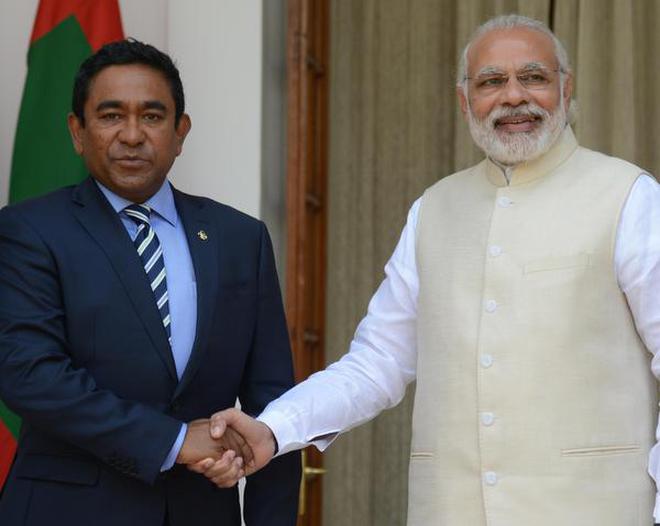 “This is part of an effort to increase the visibility in bilateral ties,” Maldives’ High Commissioner to India Ahmed Mohamed told The Hindu.

“While there is no specific agenda for the visit, we expect close bilateral consultations,” he said adding that there would be discussions on the MoUs that were signed during President Abdulla Yameen’s visit to Delhi in April 2016.

Mr. Asim’s visit is the first high-level visit between the two countries in nearly a year, since Minister of State for External Affairs M.J. Akbar visited in February 2017, and the first since the Maldives and China signed a Free Trade Agreement (FTA) in November 2017.

Shortly thereafter, India had indicated its displeasure at the speed with which the FTA was passed in the Maldivian parliament, followed by President Yameen’s state visit to Beijing. “It is our expectation that as a close and friendly neighbour, Maldives will be sensitive to our concerns, in keeping with its India First policy,” External Affairs Ministry spokesperson Raveesh Kumar had said at the time.

Mr. Asim will also officiate as President Yameen’s special envoy, according to the Ministry, raising speculation that he would formally invite Prime Minister Narendra Modi to the Maldives.

Male is the only SAARC capital Mr. Modi has not visited since he took office, having cancelled a planned visit in March 2015 over the Yameen government’s crackdown on political protests, putting a strain on bilateral ties.

Meanwhile, an official invitation last year by New Delhi to former President Mohammed Nasheed, who faces a jail term in the Maldives, had further widened the perceived rift.

However, High Commissioner Mohamed declined to comment on whether Mr. Modi was likely to travel to the Maldives in the near future. He also denied reports of any strain in ties, saying that other bilateral engagements continued, including consular talks between the two countries in October last year. Counter-terrorism exercises between armed forces called “EKUVERIN” had been held in Karnataka in December.

On the issue of the Free Trade Agreement negotiations, Mr. Mohamed admitted that “no serious negotiations” had taken place between India and the Maldives yet, but that his government “would like to have an FTA in place” at the earliest.

The FTA was only one of a series of issues between New Delhi and the Maldives in the past few months, however. In December, the Yameen government passed strictures against local councillors, who met High Commissioner of India Akhilesh Mishra, and restricted local officials from meeting diplomats.

An editorial in a government-friendly newspaper, the Vaguthu, criticising the Modi government’s “pro-Hindutva” policies had also caused concern in New Delhi. The editorial, which was condemned by the Opposition, was subsequently withdrawn, but Mr. Nasheed had also alleged that President Yameen’s actions were spoiling ties with India.

“President Yameen’s reckless foreign policy is destroying our relationship with India. The Maldives must be sensitive to India’s security and safety,” he said in a tweet last month.

In a bid to reset ties, Dr Mohamed Asim, Minister of Foreign Affairs and special envoy of the President of Maldives, will arrive in Delhi tomorrow. The Minister will hold formal talks with his Indian counterpart Sushma Swaraj and call on Prime Minister Modi the next day, in what will be the first high-level exchange between the two neighbours following months of strain in ties.

Relations worsened as Maldives overnight ratified a free-trade agreement (FTA) with China in its Parliament, without taking the opposition on board. Maldives is only the second South Asian country after Pakistan to sign the FTA with Beijing.


Speaking to The Tribune, Maldivian Ambassador Ahmed Mohamed recently refuted that New Delhi was caught by surprise over the FTA “since all negotiations were in public domain for the past two years”. He also underlined there was no official promise of signing FTA with India first and “if China was willing to sign it quickly, there was no reason for Maldives to wait”.

As special envoy of President Yameen, the formal meetings “without any specific agenda” while covering bilateral and regional aspects as per sources are expected to focus on ironing out differences and improve optics in ties. Media and public diplomacy have seemingly played a role among other factors towards relationship itches in last few months.

The Tribune has learnt that Male took exceptional objection to a senior journalist calling President Yameen a ‘geopolitical serpent’ in an analytical column in a national Indian English daily. In early December, a panelist and national security expert on state-owned Rajya Sabha TV advocated “contingent of marine commando going in there with two frigates and ending this wretched rule” referring to incumbent President Yameen. Later, a newspaper in Maldives, considered pro-Yameen, called Prime Minister Modi a “Hindu extremist leader” in its editorial, which was subsequently pulled down after a furore.

In a cautious response, MEA spokesperson Raveesh Kumar had asked “not all media reports to be taken seriously”. The public outreach of Indian Ambassador Akhilesh Mishra in the tiny island nation is also believed to have not gone down well with him not just dining frequently with opposition leaders, but also tweeting about those meetings that are used by sections in the country for anti-India rhetoric.

All these issues have figured in official interactions in Delhi as well as a letter exchange between the two Foreign Secretaries recently. While Foreign Office exchanges have continued between the two sides, PM Modi’s visit to Maldives is still pending since it was postponed in 2015, understandably following arrest of former President Nasheed.

what me find interesting is that maldivian and even sinhalese language are said to be descendant from maharashtri which is mother language of both marathi and konkani language ,

though marathi and konkani are siblings dont know how much commonality is between them and maldivian and sinhalese ???

Prime Minister receives Dr. Mohamed Asim, Minister of Foreign Affairs & Special Envoy of the President of the Republic of Maldives

They discussed the ties between India and Maldives as close neighbours bound by shared history, culture and maritime interests in the Indian Ocean. Special Envoy Asim reiterated the commitment of Maldives to maintain close relations with India under Maldives’ “India First” policy.

Prime Minister affirmed that India would always be a reliable and close neighbour of Maldives supporting it in its progress and security.

Special Envoy conveyed the greetings of President Abdulla Yameen to Prime Minister, which was warmly reciprocated by Prime Minister. 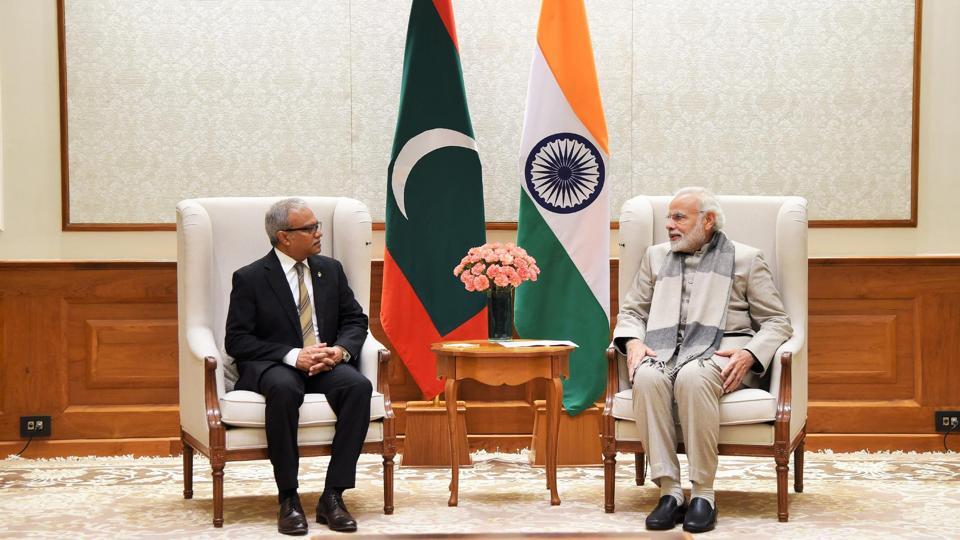 Unless until people of Maldives don't have any problem India should not intervene. The democracy there will be restored by the people of Maldives's call.
You must log in or register to reply here.
Similar threads
Trump turns down India’s invite for Republic Day celebrations
Republic of India - Shanghai Cooperation Organisation (SCO) Relations
An exhibition of the manuscripts of Timbuktu, Mali in New Delhi , Republic of India
Republic of India - Council of Scientific & Industrial Research
Share:
Facebook Twitter Reddit WhatsApp Link