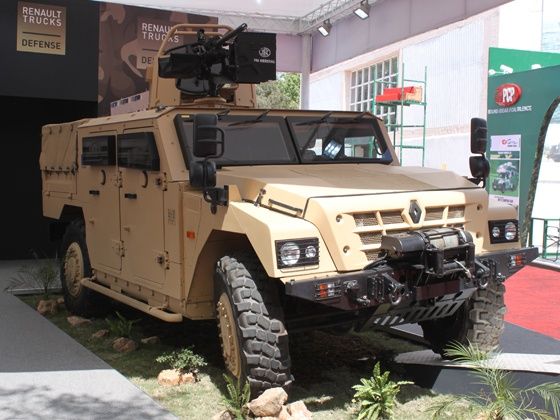 The Renault Sherpa offered to India is designed with a flexible platform in mind so as to incorporate a number of different types military vehicles ranging from fully armoured convoy trucks to military transport trucks.


Sherpa Light ::
The Sherpa Light family of vehicles from Renault are light armoured tactile vehicles designed to transport infantry, paratroopers, internal security personnel, etc. The vehicle is an on-/off-road platform with a MD 5 diesel engine that packs in 292PS of power.

The vehicles are available in both armoured and non-armoured versions. The armoured variant can also be fitted with ballistic kits and mine kits.

The Sherpa Light is ideal for tactical missions such as scouting, patrol, convoy escort and command and liaison. The vehicle can transport 4/5 soldiers and comes with a roof-mounted weapon system. It also has 5.56 / 7.62 / 12.7mm weapon systems that can be manned or remotely operated. The Sherpa Light Scout has a range of 1,000km and is good for a top speed of 110km/h.