Have you ever wondered that people of ancient time, 5000 years back to be precise, were able to fly around places like we do using Aircrafts?

Some of us might take it in a way of joke but if I say yes, there were Aircrafts at that time too which were used to travel places within the country (Kingdom) and also to different countries. We call it Aeroplanes and they used to call it ” Vimana “. Vimana is a combination of two words ‘Vi’ means sky and ‘mana’ means measuring out.
One of the Vimana of which you may be aware is Pushpaka Vimana, the one used in Ramayana by Lord Rama to travel back from Lanka to Ayodhya after defeating and killing Ravana.

Pushpaka Vimana was also described in a scene where Sita was taken by Ravana to Lanka, this was seen by Jatayu (a demi- god in the form of Vulture and an old friend of Dasharatha) along with many other locals. Jatayu even fought with Ravana but couldn’t win against powerful Ravana.

Do you know :
Ramayana was originally written in Sanskrit by Valmiki and was translated in hindi by poet Goswami Tulsidas in the 16th century which was then to be called Ramcharitmanas.
Who built Pushpaka Vimana ?
Pushpaka Vimana was originally build by Vishwakarma for Lord Brahma (the creator). But Brahma afterwards gave it to Kuber (God of wealth). But later his step brother Ravana stole it from Kuber along with Lanka.

What was Pushpak Vimana? 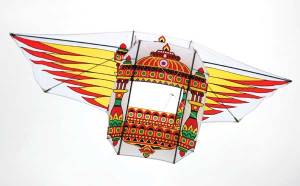 ​
Something that astonishes me is whether there was any field of study related to Aeronautics or was it just a thought that provoked within the mind of Valmiki.

But if we look at the descriptions given in Vedas which state about other Vimanas of various shapes and sizes . For example Agnihotra Vimana having two engines, the Elephant Vimanas with many engines etc.

Here’s a description of Pushpaka Vimana in Vedas along with its explanation. 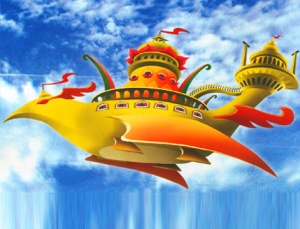 Meaning — “Dark the descent. The birds are golden-coloured; up to heaven they fly, robed in the waters. They again descend from the seat of Order, and all the earth is moistened with their heaviness. Twelve are the fellies, and the wheel is single; three are the naves. What man hath understood it? Therein are set together 360 spokes, which in no way can be loosened.”

Another translation of this Rig Veda verse by Shri Dayanand Saraswati goes like this: The vimana “jumps into space speedily, with a craft using fire and water, containing 12 stamghas (pillars), one wheel, three machines, 300 pivots, and 60 instruments. Isn’t this mind blowing.

Valmiki described in Ramayana that the Pushpaka Viman could be controlled by brain and it works and goes according to the wish of his traveller. We have also heard of an incident in Ramayana where at the time of leaving from Lanka every member of Vanar sena wished to come along with Lord Rama to Ayodhya and their wish was fullfilled by him by letting them all come into Pushpaka Vimana, from the above incident we can think of the size the Vimana would be at the time.

Vaimanika Sastra, text written by Bharadvaja clearly defines the operation of Vimanas, fuel used, design, information on steering, it even included the methods to switch to “solar energy” from other energies.

The Vaimanika Sastra includes 8 chapters which describes 3 types of aircrafts, including apparatus that could neither catch fire nor break. It also mentions 31 essential parts from which they are constructed, which absorbs light and heat and thus considered apt for aircraft construction.

Even Samara Sutradhara, a scientific treatise dealing with air travel, is a Vimana. It’s 230 stanzas describes about the construction, take- off, cruising and landing, including collisions with birds.

Pushpaka Vimana has always amazed me as a science and hindu mythological lover and made me think that whether this all would be just a myth or a real scientific inventions.

Why is this in Indian Air Force section?

Although the concept of Vimana is not new to India, it is only a concept but there are no proofs to say that practically Ancient Indians have implemented the concept.

However in one of the stories of ancient India there is a war in which the fighting between the two groups is described which resembles UFO's fighting each other.

Admirable India said:
Have you ever wondered that people of ancient time, 5000 years back to be precise, were able to fly around places like we do using Aircrafts?
Click to expand...

Some of us might take it in a way of joke but if I say yes, there were Aircrafts at that time too which were used to travel places within the country (Kingdom) and also to different countries. We call it Aeroplanes and they used to call it ” Vimana “.
Click to expand...

The Bigger the claim the bigger the proof required.

Our ancestors were far more advanced than their counterparts in the rest of the world but it's very very tough to prove they flew aircraft.
By the descriptions of the Maharshi Bharadwaj and others it's certain they had some sort of theory on flying aircraft,whether it happened in reality is a big question?

Are you watching ancient aliens on history channel?? :biggrin2:

Anyways we should dismiss it as theory or mythology. This does not deserve to be discussed on this forum.

This is a futile topic with no relevance other than satisfying egos of some jingoistic indians.

pmaitra said:
Why is this in Indian Air Force section?
Click to expand...

why would it not be?

Could have been a hot air balloon or just the hot air.