Prithvi missile interceptor one of the best in the world: Here are 10 reason


BHUBANESWAR: India on Saturday successfully test-fired what is hailed as a gen-next state-of-the-art interceptor missile from a defence base off Odisha coast, achieving a significant milestone in its ongoing Ballistic Missile Defence (BMD) programme.

The homegrown anti-ballistic missile, dubbed Prithvi Defence Vehicle (PDV), travels at supersonic speed and is capable of destroying targets at a high altitude of more than 120 km in the exo-atmospheric region.

The interceptor missile was fired at about 7.45 am from the launching complex-IV of Abdul Kalam Island (formerly Wheeler Island), a couple of minutes after the target, mimicking an enemy missile, took off from a warship anchored in the Bay of Bengal nearly 70 km off Paradip coast.

Prithvi Defence Vehicle, the interceptor indigenously developed by Defence Research and Development Organisation (DRDO), destroyed the target missile at an altitude of 97 km.

Here are 10 things that make PDV interceptor one of the best of its class in the world.

1. Prithvi Defence Vehicle interceptor missile is capable of killing an incoming missile with a strike range of around 2,000 km outside the earth’s atmosphere. India is the fifth nation in the world to have a robust Ballistic Missile Defence system. Other countries are US, Russia, Israel and China.

2. Both the interceptor PDV and the two-stage target missile were equipped with motors specially developed for the mission.

3. In an automated operation, the radar and tracking system detected the target missile, predicted its trajectory and gave the requisite command to fire the interceptor missile.

5. After the missile crossed the atmosphere, the heat shield ejected and the infrared (IR) seeker dome opened to look at the target location as designated by the mission computer. With the help of inertial guidance and IR seeker, the missile zeroed in on the target for interception.

6. From detection to interception, the entire exercise was fully automated and there was no human intervention. The PDV interceptor is a part of a multi-layered BMD system developed by India to protect its cities from hostile attacks.

7. The advantage of intercepting an incoming missile at such a high altitude is that the debris would not fall on the ground and there would be no collateral damage.

9. This was the 12th test of interceptor missile and the second test of PDV in the last three years. The first test of the missile was conducted on April 27, 2014. Earlier, eight of the 11 tests were conducted in the endo-atmospheric region (below the altitude of 30 km) and three in exo-atmosphere (above an altitude of 80 km). Altogether, nine tests have been successful.

10. DRDO started developing the BMD system in 1999, with the help of around 40 public and private companies.
M

Hemant Rout who is usually very conservative in prasing DRDO and always the first one to tell us about chinks in the DRDO armour , this time can not stop praising today's BMD test and thinks this indigenous BMD we got is one of the best in the world .

I have a question, how does this missile deal with real warhead equipped missile from the decoy missile trying to confuse the defence system.

Hari Sud said:
I have a question, how does this missile deal with real warhead equipped missile from the decoy missile trying to confuse the defence system.
Click to expand...

It cannot distinguish a decoy from the real. It is also unclear how this missile will destroy MIRVs. It would need to take on the enemy missile before it deploys its MIRVs, ie at point 3, 4 or 5. Or else it would be extremely difficult to target the MIRVs once released. Point 3 will be too early to detect. That leaves points 4 and 5. So what's the plan? 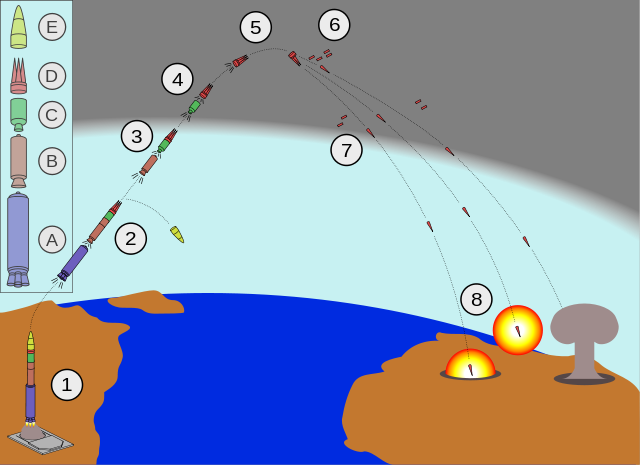 Pakistan does not have MIRV as MIRV for non ICBMs is impossible . it has MRV which will kick in at point 7 by which time PDV will destroy it. A bigger issue is at point 5 where RV can take a sharp turn if additional thrusters are deployed completely wasting your trajectory calculations.
You must log in or register to reply here.
Similar threads
Indian Army successfully test fires Nuclear Capable Ballistic Missile Prithvi-II off Odisha coast
India successfully test fires indigenously developed Prithvi-II missile
Prithvi-II missile test fired
Nuclear Capable Prithvi-2 Missile Successfully Test Fired
Share:
Facebook Twitter Reddit WhatsApp Link