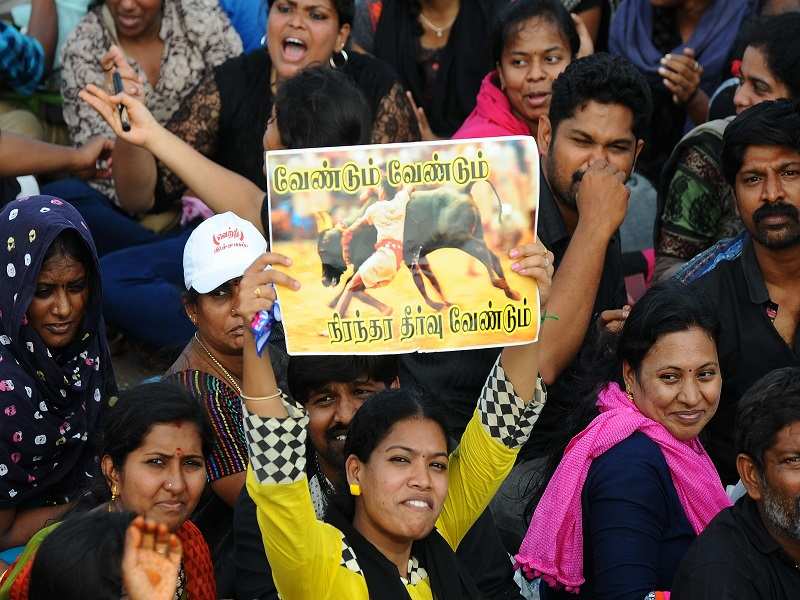 The Jallikattu protests in Tamil Nadu, which had been peaceful for a week, turned violent today with demonstrators throwing stones at police following eviction action against them at the Marina beach,. This happened even as governor CV Rao promised to table a bill in the state assembly to lift the ban on the bull-taming sport. Here are the recent key developments:
1.
The ongoing jallikattu protests took a violent turn today, with demonstrators in Chennai and Madurai pelting stones at the police, who resorted to lathi charge to control the mob.
2.
The police used teargas shells to disperse the protesters who assembled at several roads leading to Marina Beach.
3.
In order to prevent further mobilization of demonstrators, all routes to Marina Beach, the ground zero of the agitation, have been cordoned off.
4.
TOI's Sindhu reported that some unidentified persons set a few bikes on fire in front of the Ice House police station near Marina Beach. The miscreants are believed to be part of the jallikatu protests.
5.
DMK President MK Stalin condemned the police action as "anti-democratic". "It is condemnable that instead of holding talks with peaceful protesters, it has been attempted to end protests using police with an authoritarian mindset," Stalin, who is the Leader of the Opposition in Tamil Nadu assembly, said.
6.
Tamil Nadu governor C Vidyasagar Rao today said a bill to replace the ordinance would be placed by the state government in the Tamil Nadu Assembly immediately. "This mass movement has paved the way for lifting the ban on jallikattu," Rao said.
7.
In Coimbatore, the police pounced on a protester who stood up with a kerosene canister and threatened to self-immolate. They were successful in taking away the inflammable liquid.
8.
The police today began evicting scores of pro-jallikattu demonstrators from protest venues across the state. Some protesters at the Marina Beach lined up at the seashore forming a human chain. A group also entered the water, refusing to heed police requests to disperse.
9.
Demonstrators in Tirunelveli district have decided to call off the protests.
10.
After the promulgation of the ordinance, P Rajasekhar, President of the Jallikattu Pathukaapu Peravai, appealed to the protesters to call off their agitation. However, protests continued in Chennai, Madurai and Puducherry, despite intensive police action to evict the protesters.