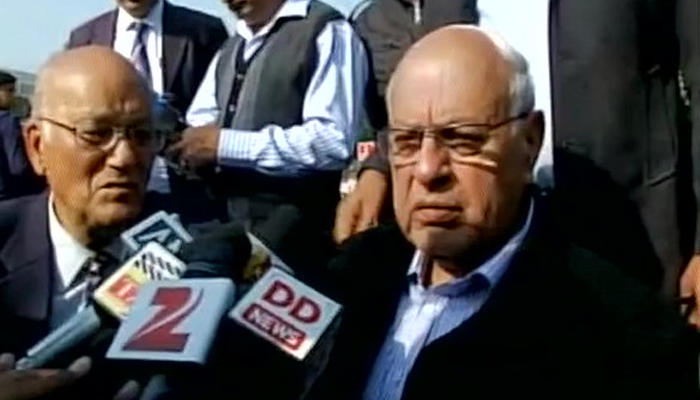 Jammu: Former Jammu and Kashmir chief minister Farooq Abdullah on Friday made a controversial statement when he said that Pakistan-occupied Kashmir (PoK) will continue to remain in Pakistan.

“PoK is in Pakistan and will remain; J&K is in
India and will remain. We need to understand
this,” Farooq Abdullah said.
“War is not the solution, only lives are lost.
Dialogue is the only option,” he added, speaking
on India-Pak relationship.
It is not clear what prompted the National
Conference leader to make such remarks.
Reacting to the comments, J&K Deputy Chief
Minister Nirmal Singh said, “1994 Parliament
resolution clearly said that PoK is
constitutionally a part of India.”

We should thank him for bringing this issue back in media discourse.

POK is for Pakistan or not will be decided by Union of India, not him. We should use this opportunity to put forth our case strongly.

Let us dominate this discussion and make our voices heard to everyone.

hit&run said:
We should thank him for bringing this issue back in media discourse.
POK is for Pakistan or not will be decided by Union of India, not him. We should use this opportunity to put forth our case strongly.
Let us dominate this discussion and make our voices heard to everyone.
Click to expand...

Yes, let's hear the 'feminine, short, rapey, cow worshipping' Hindus & what they have to say.
Maybe they will do Gandhi style Dharna on samjauta express line to get back Panchnad as well.

'Hindu' can either be coward or 'facist' i.e excess

Unbalanced due to lack of kesh.

There's only one direction this country can take, and it involves ripping up constitution & saying our 'laws' are in Aad, Dasam, Sarblo Guru Granth, Vedas, Upanishad etc.

Steps in between are just fluff...
K

We should thank the butt head political Foolbrooke Ab-dik-lah (absent dick lad), I endorse his statement but he could not express it to the entirety. He said POK in porkistan till its survival that's correct as its on ventilator it will collapse soon and very soon the pork eating people will have a nice barbecue of porkistan. Then Akkand Bharat will start taking shape...

Borders are never static. This he needs to understand. When the time comes, we will take back Punjab and Pak Occupied Kashmir. But we have to wait, and create opportunity to do action.

POK is not a jagir of islamic republic of pakistan! Anyways pakistan is a prostitute of the US and at times swings to China for some extra bucks, however when the masters stop paying this prostitute, then - na raheja POK aur na Rahega balochistan pakistan me!

And Farooq Abdullah will remain chutiya...

nice and wise decision. keep the respective Kashmirs to each other, make LOC and the IB and move on and develop the infrastructure ,tourism,jobs,hospitals,school and university etc etc.

call back kashnmiri pundits and sikhs rehab them back in kashmir.

make kashmir a jannat which it used to be


keep fighting with no results but lot of deaths for ever

maomao said:
POK is not a jagir of islamic republic of pakistan! Anyways pakistan is a prostitute of the US and at times swings to China for some extra bucks,
Click to expand...

Add Russia as their new customer.

In every move, Pakistan tries to diminish India's claims on PoK. They try to get foreign investments on Pakistan occupied Kashmir. Never acknowledge PoK as a region of Pakistan, that will be the first stage of defeat. PoK is now and then a territory of India illegally occupied by Pakistan.

Afghanistan is a neighbouring and border sharing country by the Indian constitution. Anyway, he just fed the Pakistani argument.

I hv read former RAW chief A S Dulat's book on Kashmir. and he has got long experience of kashmir also he had very good relation with farooq for long time nd he interacted with farooq( Chief minister at that time) in sensitive and critical issues like Indian airline hijack and kidnapping of muftis daughter.

As per Dulat farooq is d most experienced,sensible,and trusted man in kashmir with very good understanding of people of kashmir.(as per Dulat understanding kashmiris is very difficult they will not trust u so easily) @ d time of realeasing terrorist he was against it nd even offered to resign from post of chief minister dont remember he did it or no but he warned d consequence which we will face in future nd unfortunately we faced it. He use to have lot of info before IB use to have it.

when i came to know about actually how much part of kashmir we are in control of i felt humiliated cause by looking at map we tell our people not only that much part of map belongs to us but also we have it in our possesion.

I know pok belongs to us but our gov should differentiate on d map by some means ( aprt from just leaving some seats in assembly of kashmir void) so common pepople will know though it belong to us it is still not in our possession.

I can just imagine strategic importance of that part.
1. trade with afghan 2. oil, gas from turkmenistan nd russia 3. disconnect pak nd china 4. thus contain china to china sea with strict control in Andaman sea nd thus giving them less role to play in gulf. 5.i read somewhere that pok is rich in minerals as well (not sure)

Will Pakistan be part of India

Guy leave emotions . Think practical , think secure future . According to me we should make LOC in IB and move on
I

Taking back PoK brings in a load of security issues. We are claiming a bunch of radicalised muslims.
Not necessary at all. We already face hell a lot of security issues because of the native Muslims (not everyone) and taking back PoK is like rubbing salt on the wound. Let PoK remain with Pakistan and India must fund and incite resurgence and protests there. 'Pakistan must never rule PoK peacefully' should be India' stance for paying-back the actions of Pakistani Bas*****.

To fix out part of Kashmir, we must decimate and neutralize all terrorists and Pakistani sympathizers.

His statement isn't that controversial, the media is just spinning it that way. He basically said realistically both sides will keep the parts of Kashmir that they already have. It's been that way for the last 60 years, and isn't an unreasonable viewpoint. Seems he just wants to move on from the constant conflict and bs.
You must log in or register to reply here.
Similar threads
PoK PM Says He's Not Sure About Remaining With Pakistan
South Korea tells its firms to stop PoK investments
13 year old PoK girl raped by Pakistani army man
The PoK Survey: Over 70% wants independence from Pakistan
Share:
Facebook Twitter Reddit WhatsApp Link