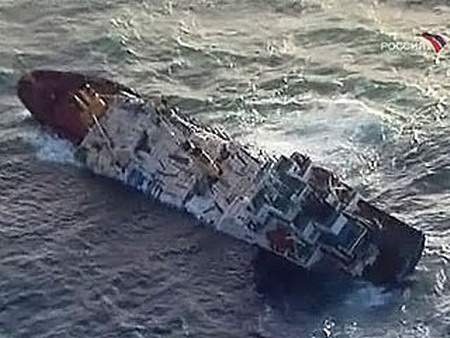 Every year, dozens of Russian ships are subject to arrest in foreign ports. To help them at the state level is difficult because they operate under foreign flags. This causes great damage to the country's image as a maritime power. In this work is to simplify the registration of ships in Russia in Rosmorrechflot slowed down, and the agency can not establish a government job, even shipping companies.

Stories with disasters in foreign ports of Russia's sailors have long become commonplace. Scheme of the tragedy is always the same - the owner of the vessel can not pay port charges or issue a wage mariners. The vessel is arrested, and the crew are left to fend for themselves. Over the past few months in similar situations were nearly a dozen sailors ships. For example, the command ship "Boris Lavrov", now in Nakhodka, and before that standing in South Korea, have not been paid for more than three months salary.

Russo-Ukrainian crew of the ship «Island of Luck» now sits in a prison in Congo, and the owner threw them and the ship. Sailors from the ship "Igor Belianska" were forced to return from China alone in Russia, as their ship was sold out with the crew. In this case the owner refused to return them to pay arrears of 100 thousand dollars

Under arrest in 2009 in Dubai, got the ship "Magdalena", and in Varna (Bulgaria) trapped on board the "Southern Pearl spent 12 crew members. Timber "Madero" stuck in South Korea, and Panama shipowner "Piruita" Russian sailors left without salaries. In January 2010, just six Russian fishing trawlers operating under the flag of Cambodia, were arrested in Vietnam.

But the most egregious case was that of the courts of the Arctic Marine Shipping Company (ILA), belonging to the subject of Russia - Republic of Yakutia. ILA in 2008, entered into a contract with the shipyard in China Beyhane credit scheme for the repair of two ships - Vasily Yang "and" Professor of the Resurrection. " However, since spring of 2009, sailors on ships no longer pay salaries, and shipping company itself no longer finance repairs. In the end, before the Chinese in debt of 46 million rubles., Both the ship under the flag of Russia were under arrest.

The fate of the same crew of two ships in the ILA, it seems, simply forgotten. At the 40-degree heat with no electricity, water and food they have been abandoned to their fate. Things went so far that the sailors approached the president of Russia Dmitry Medvedev and Prosecutor General Yuri Chaika to ask for help. And while Moscow has received no indication of understanding, the GSA and the Federal Agency of Maritime and River Transport (Rosmorrechflot), which oversees the courts under Russia's flag, does not help his compatriots.

Ultimately, common sense won, the crews of ships and vessels managed to pull themselves from arrest (the "Vasily Yang" will be sold for scrap). However, this is not the first nor the last row in the maritime transport of Russia.

The fact that the state represented by the Ministry of Transport and Rosmorrechflot consistently failed to address the underlying causes of such infamous cases which stand for Russia's prestige as a maritime nation - a complicated, expensive and, quite possibly, corrupt system of registration of ships in Rossiyskom international register of ships (RMRS) .

But to help Russia vessel flying a foreign flag outside our country, almost impossible. The maximum we can talk about consular and humanitarian assistance to the crew. Economic disputes here must deal with the tenant of the vessel or its owner.

Another thing - the court under Russia's flag. Rosmorrechflot as the structure of the Ministry of Transport shall monitor the implementation of owners of their obligation to pay port charges and repairs, assist them in case of arrest of the vessel or social conflict. However, even this is not done.

Because the Russian ships in the open ocean is practically no. Only 5% of Russian ships out to sea under the national flag. This situation is comfortable for the officials and saves them from having to carry out their work. Since the late 90-ies in the RF from the experience of foreign countries have begun to develop a project Rossiyskogo international register of ships (RMRS, so-called second register). It was expected that they will be able to take advantage of those vessels that operate on international routes, and check it would be easy and convenient. Everything turned out exactly the opposite.

Ministry of Transport took seven years to bring this idea to the law, and eventually turned a useless document. At the end of 2009, according to Rosmorrechflot of almost 3170 vessels entitled to fly a flag of Russia, the RMRS was registered only 218 ships - mostly small (river-sea). The rest prefer to use Russia's court "flags of convenience" of Cambodia, St. Vincent, Belize, Panama and even land of Mongolia.

The reason is simple: check in registries of these countries is easier and an order of magnitude cheaper than in Russia. Even in the registry of such "expensive" countries, like Norway, to issue the registration can be for one day. In RMRS, according to the website Rossiyskogo union of seafarers, the procedure may take up to 45 days. In the case of registration in the RMRS, according to the publication "Transport of Russia bought foreign vessel is taxed at 24.2% of its value, whereas for the Mongolian, or Panamanian flag you have to pay only 2.5%. Even less is obtained from the registration scheme shipowner company offshore. This eliminates the need to pay Russia's ESN to 26%.

But the most important thing that came in once in RMRS, the vessel for 10 years can no longer leave it - otherwise, the owner, as the member of the presidium of the Association of International Maritime Law Gennady Yeghia have to "pay in full all taxes over time" (ie return for benefits), and that almost half the cost of the ship. Not surprisingly, want to surf the sea under the flag of Russia's so little. For example, in 2003-2008 the number of Russian ships under foreign flags in general has increased in 1,5 times.

For the country's economic situation, when 95% of ships goes under the "strangers" flags, is absurd. This increases the cost of chartering vessels and leads to their rapid deterioration in the absence of control by the state. Now most of Russian ships already uncompetitive, because their age is 25-30 years. Only in the last 10 years in the Far East, there were 10 accidents with Russia's ships under the flags of Belize, Mongolia, Panama, and even Georgia, which killed over 100 sailors.

In developed countries, those courts that choose the national flag, are given preference for taxes, fuel surcharge and port charges. Due to this, for example, Germany is currently carries more than 80% of river transport in the EU.

In Russia, the activities of officials of Ministry of Transport and Rosmorrechflot brought the situation to a critical stage, when Russia's flag became frightened and hungry sailors months sitting in the ports under arrest. Almost six years, who heads the Federal Agency of Maritime and River Transport, Alexander Davydenko, however, regularly promises to solve the issues of the leasing program for the construction of ships and long-term loan operators, ordering ships at Russian shipyards. However, it seems that in reality no desire to have the Ministry of Transport and Rosmorrechflot introduce elementary order in maritime transport and simplify the rules for registration in the RMRS no. This strategy samotopov, leading, apparently, to the death of Russia's fleet.

http://www.ng.ru/economics/2010-03-18/4_samotopy.html
You must log in or register to reply here.
Similar threads
At UN, Erdogan Cites Muslims’ Plights Around the World, But No Mention of China’s Uighurs
This story tells the plight of even Pakistan's so-called 'middle class'
Pakistan expresses concern at plight of Myanmar's Rohingya Muslims
Britain blamed for Indian Malaysians' 'plight' in ex-colony
Share:
Facebook Twitter Reddit WhatsApp Link