The movie Red Dawn (1984) starring the young Patrick Swayze (RIP) and Charlie Sheen was perhaps one of the more memorable movies of the 80's. The prospect of a Soviet invasion of Continental America had been a frightening scenario that played well into the collective psyche during the Cold War.

Fast-forward to 2009, instead of fearing nuclear holocaust or imminent military invasion, we are fearing the fallout of the worse economic recession since the 1920's, not to mention owing a sizable chunk of our debt to the Chinese. So it is probably fitting that the new remake of Red Dawn (2010) due to be released in 2010 would exploit the public hysteria surrounding the possibilities of a Chinese economic takeover. Ironically in the original Red Dawn, the Chinese and the Americans were allied (probably as a result of the height of the Sino-American rapprochement at the time the movie was made).

Chinese netizens were generally both amused and bemused behind the idea of China invading America, with some expressing satisfaction toward such an endeavor, while others disliking the portrayal of the People's Liberation Army (PLA) on the set. 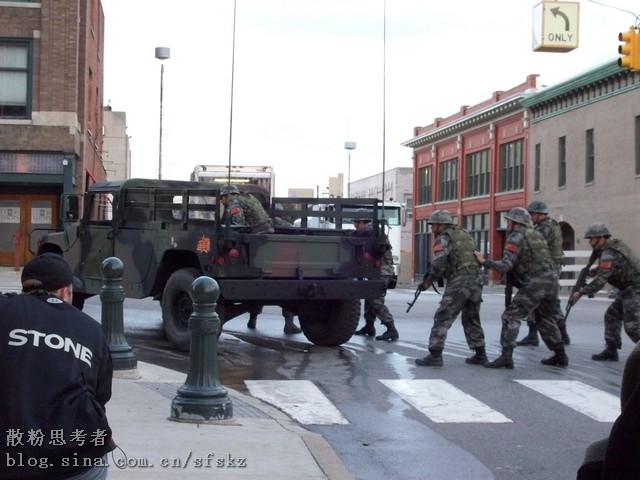 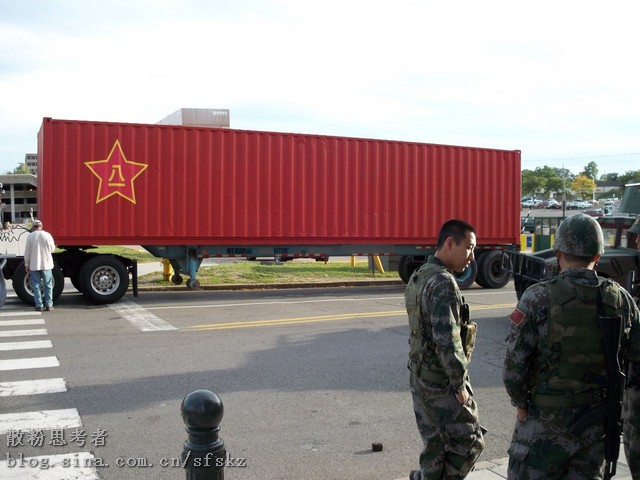 This film is mainly targeted at the American teenagers, i am concerned once this film is released publicly, it will create a very negative impression about China among American teenagers. There are many anti-China plots in this film, considering children's strong sense of imitation, i am afraid how these children are going to treat Chinese and think about China after they watch this film. This film is purely to incite hatred towards China.
Last edited by a moderator: May 10, 2015

Americans makes that kind of movies before breaking target countries. Beware China, Yankees will repeat the USSR history for you, I think this movie will be hit in India as well.

French government runs away before PLA marches in.

But soon enough, PLA starts to indulge in 'corrupt' bourgeoisie life and leave their 'ideals' behind...
Last edited: Jun 1, 2010

here are how different nations react to the emergence of CHina:

Russia:" All china-made are copies of Russia's...."

Japan:" Tribute state system centered in CHina is reviving in orient land........what should Japan do with it?...."

India:" China is gettting old....China has no human right..China has no democracy...CHinere are slaves......CHinese data are cooked.... CHina is a big bubble...all beauties in CHina is just a myth......anyhow China is doomed and India will have the future...."

This movie reminds me of an anti-Russian movie I saw as a teenager Red Dawn the original one where teenagers battle invading soviets. This is the same title but Russians have been replaced by Chinese.

The threat of an attack from the Soviet Union during the Cold War was generally real one, and I am glad it never happened. The threat of a successful Chinese invasion takes an incredible stretch of the imagination, as the country is surrounded by enemies who would see this as an opportunity either to declare independence (Taiwan), or to get revenge for a previous conflict China aggressively participated in.

cinema represent a countrys mindset,its look after soviet the chineese have taken place as a cvil country in views of west particullarly american .

have you played world in conflict game?
plot is like this...Russia invades USA and at the end China comes to help Russia win the battle on USA soil..but only PLA navy warships are shown approaching USA and before they approach you have to beat Russia while playing as USA.

Just for the record, the story has been changed into a North Korea invasion of USA. Apparently, money talks.

In June 2010, release of the film was delayed due to MGM's financial difficulties. The delay came amid growing controversy in China after excerpts of the script were leaked on the website The Awl. The film drew sharp criticism from the Global Times, one of the leading Chinese state-run newspapers, with headlines such as "U.S. reshoots Cold War movie to demonize China" and "American movie plants hostile seeds against China". One of the articles stated: "China can still feel U.S. distrust and fear, especially among its people. Americans' suspicions about China are the best ground for the hawks to disseminate fear and doubt, which is the biggest concern with the movie, Red Dawn".[14][15]

In January 2011, the first cast photo was released along with news that MGM will release the film once their Chapter 11 restructuring is completed. Red Dawn is one of three already completed MGM projects scheduled to be released in 2011.[3]

In March 2011, the Los Angeles Times reported that MGM is changing the villains in its Red Dawn remake from Chinese to North Korean in order to maintain access to China's lucrative box office. The changes reportedly cost less than $1 million and involve changing an opening sequence summarizing the story's fictional backdrop, re-editing two scenes and using digital technology to transform many Chinese symbols to Korean. The changes will not eliminate all references to China though will give North Korea a much larger role in the coalition that invades the U.S. Producer Trip Vinson stated, "We were initially very reluctant to make any changes, but after careful consideration we constructed a way to make a scarier, smarter and more dangerous 'Red Dawn' that we believe improves the movie".[4]
Click to expand...

utubekhiladi said:
do u have dvd rip by any chance....
Click to expand...

I don't quite understand what is that supposed to mean, because the film has not been released yet according to my knowledge.
You must log in or register to reply here.
Similar threads
Pla grunt's equipment news
PLA Recruitment Videos!
PLAAF 70 years, PLA's Air Force to host open-house event in Changchun--the 3rd big event of this Oct
Just as Pla-land dangles Packland as a constant distraction absnec for India to have equivalence
Share:
Facebook Twitter Reddit WhatsApp Link