Pirates of Somalia: News and discussion 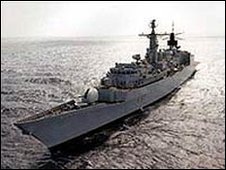 HMS Chatham's helicopter spotted a larger vessel towing the two attack boats in the Somali Basin, about 150 miles off Tanzania, on 14 May, it said.

After monitoring the vessels overnight, a Royal Marine team launched a "well-planned operation" at dawn, it said.

Ten Somalis surrendered and the two smaller boats were destroyed.

Commander Simon Huntington, commanding officer of Devonport-based HMS Chatham, said he was "extremely pleased" the warship had "successfully disrupted a pirate attack group operating in the Somali Basin and prevented them from mounting attacks against merchant shipping".

'Considerable fuel'
He said: "This clearly demonstrates Nato's determination and commitment to continue the fight against piracy in the region."

Nato said prior to boarding the boats, the suspected pirates had been observed throwing items, including their weapons and other piracy related equipment, into the sea.

When the Royal Marine team boarded the larger craft, 10 Somalis and a large amount of fuel were found on board.

The two smaller boats had been fitted with powerful outboard engines and also contained a considerable amount of fuel.

Once separated from the larger craft by the Royal Marines team, the warship and its Lynx helicopter destroyed the smaller craft so the suspected pirates could not continue with their mission.

Nato said the 10 Somalis were left with only enough fuel in the larger vessel to return to Somalia.
The search was coordinated with a EU Naval Force Maritime Patrol Aircraft, operating out of the Seychelles.
http://news.bbc.co.uk/2/hi/uk_news/8688330.stm
You must log in or register to reply here.
Similar threads
Navy SEALs raid Somalia pirate compound, free hostages.
Somalia Says Relations With Russia May Be Harmed Over Pirates' Treatment!
SOMALIA: Russia executed all Somali pirates – spokesman
Insurgents' Seizure of a Pirate Base in Somalia Raises Questions About Its Future
Share:
Facebook Twitter Reddit WhatsApp Link