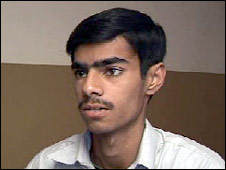 Adnan Hussain lost all of his immediate family in the market place explosion in Peshawar earlier this week - the biggest bombing in the recent string of militant attacks in Pakistan.

Adnan says his relatives had gathered for his cousin's wedding in the city - but nine of them were killed in Wednesday's blast when they went shopping ahead of the festivities.

Here he relives the horror of that day in an interview with the BBC's Aleem Maqbool.


"We had all been at my grandmother's house. My mum told me to go and fetch my dad from my uncle's place so we could all go to buy bangles and clothes and other stuff for the wedding.

I went to get my dad but decided not to go shopping and stayed with my uncle.

An hour later, we heard the blast.

At that time, I really didn't think my family was hurt, but my grandmother told me to go to see what had happened and to look for them.

When I realised it had happened in the market, I worried. I saw all the broken glass and the security men wouldn't let me go in. I could see they were pulling out bodies and I was scared. 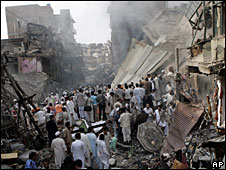 More than 100 people were killed in the explosion​
I ran to the hospital and waited.

One after the other four bodies came in. I really can't describe how it felt.

I lost my mother, father, two aunts, my four sisters and my brother. Sonia was 12, Irum was eight, Sehrish was six, Fariah was five and my younger brother Salman was three years old.

They still haven't found five of the bodies.

What did my family do? Why would anyone do this to them? I don't understand.

And where was the security? They always tell us there's a red alert and security is high but there was nothing.

I still have my grandmother, and my uncle told me not to worry and that he will take care of my schooling.

But all I can think about is that terrible day and I want to cry."

Why would any proud pakistani do such evil act's to there own country [email protected] women.
The measure of a screwd up country is when people turn on people,and for what. god?
You must log in or register to reply here.
Similar threads
Ten killed in Peshawar cinema blasts
Suicide Blast in a Church in Peshawar - Pakistan.
Blast in Madrasa in Peshawar
Big blast in Peshawar, pakistan
Share:
Facebook Twitter Reddit WhatsApp Link