'perfect Storm' Brewing? Islamic State Says It Could Acquire Nuke From Pakistan For Attack On Us

This image made from an undated video on a social media account frequently used for communications by the Islamic State shows Omar al-Shishani standing next to the group's spokesperson among a group of fighters as they declare the elimination of the border between Iraq and Syria. (Militant social media account via AP)

The Islamic State (IS) has suggested that it can use the “billions of dollars” in its coffers to acquire a nuclear device from Pakistan for carrying out a spectacular attack on the United States.

The claim was made in an article in the latest issue of Dabiq, the glossy online propaganda magazine of the IS. The article “The Perfect Storm” was attributed to John Cantlie, a British correspondent who was kidnapped by militants in Syria in November 2012.

The article, full of bluster and exaggerated claims, noted that several terror groups such as Boko Haram have already pledged allegiance to the IS. It posited that the acquisition of a nuclear device would be the logical next step after militants have seized weapons like tanks, rocket launchers, missile systems and anti-aircraft systems.

“The Islamic State has billions of dollars in the bank, so they call on their wilayah (chapter) in Pakistan to purchase a nuclear device through weapons dealers with links to corrupt officials in the region,” the article said.

The article then outlined a “hypothetical operation” to move the nuclear weapon from Pakistan to IS fighters who could use it to mount an attack on the US.

“The weapon is then transported overland until it makes it to Libya, where the mujahidin move it south to Nigeria. Drug shipments from Columbia bound for Europe pass through West Africa, so moving other types of contraband from East to West is just as possible,” it said. 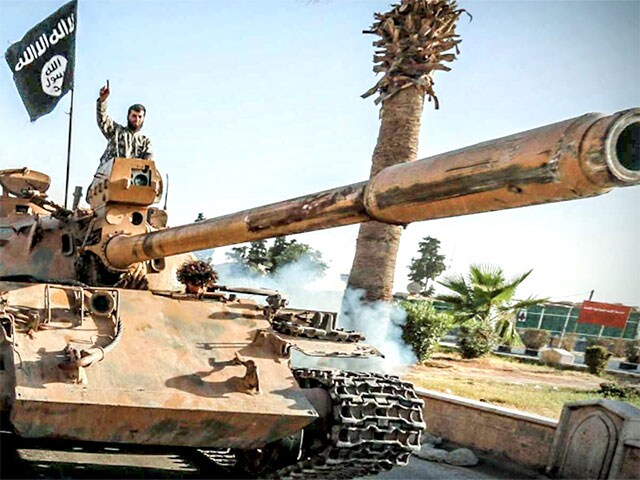 A photo from the latest issue of Dabiq, a glossy online propaganda magazine of the IS.

“The nuke and accompanying mujahidin arrive on the shorelines of South America and are transported through the porous borders of Central America before arriving in Mexico and up to the border with the United States. From there it’s just a quick hop through a smuggling tunnel and hey presto, they’re mingling with another 12 million ‘illegal’ aliens in America with a nuclear bomb in the trunk of their car.”

The article acknowledged that such a scenario is perhaps “far-fetched but it’s the sum of all fears for Western intelligence agencies and it’s infinitely more possible today than it was just one year ago”.

Pakistan has repeatedly rejected concerns expressed by the West about its nuclear arsenal, saying it has multiple layers of security and a robust command and control structure for its atomic weapons. It recent years, it has raised a special force to guard the nuclear weapons.

Even without acquiring a nuclear weapon, the article posited that IS fighters could carry out an attack on the US with ammonium nitrate-based explosives.

“And if not a nuke, what about a few thousand tons of ammonium nitrate explosive? That’s easy enough to make. The Islamic State make no secret of the fact they have every intention of attacking America on its home soil and they’re not going to mince about with two mujahidin taking down a dozen casualties if it originates from the Caliphate,” it said.

“They’ll be looking to do something big, something that would make any past operation look like a squirrel shoot, and the more groups that pledge allegiance the more possible it becomes to pull off something truly epic.”

The article further said acquiring aircraft too “would be the logical next step”. This, the article claimed, was the “plot of a political Western horror film”.

The article claimed huge swathes of “Pakistan, Nigeria, Libya, Yemen, and the Sinai Peninsula are all now united under the black flag” of the IS. It also said mujahideen in Afghanistan were now loyal to the group.

Earlier this year, IS announced the creation of a new chapter for Khurasan, the historic name for the area encompassing Afghanistan, Pakistan, Central Asia and parts of India.

Cantlie has regularly been used by the IS for its propaganda material, including a series of videos posted on YouTube. Though Cantlie has been critical of the West, including the US and Britain, in the videos and articles, experts believe he is participating in the propaganda under duress.
You must log in or register to reply here.
Similar threads
Advanced Medium Combat Aircraft is Perfect Solution for India’s 5th Generation Fighter Problem
Finally got Perfect Drone flight !!
Can a perfectly invisible aircraft be made?
Perfect Terrorist Network - David Headley role in Mumbai attacks
Share:
Facebook Twitter Reddit WhatsApp Link