After fake encounter of Pashtun student by GHQ pet Rao Anwar(who is now conviniently "missing"),Pashtuns have taken to the streets,even in Islamabad

In solidarity with the #PashtunLongMarch in Islamabad #PashtunSpring in Bannu district of Khyber Pakhtunkhwa razes Pakistan's National flag to ground. Such is the anger against the worse Pakistan Army and its coward Generals.


“If you don’t consider us Pakistani then remove us, we can make our own state or we’ll become part of Afghanistan” *crowd starts cheering* #PashtunLongMarch


Pashtuns are the second largest ethnic group in Napakistan and are being tortured by the Pakjabis.

Pashtunistan specifically on the paki side is not far off.
Pakis are probably having deja vu about bangladesh.
Last edited: Feb 10, 2018
I

turn this into another mukti bahini. RAW needs to make RN Kao proud

Historically speaking pakistani punjabis have always been b!tches of pathans. I think they are now getting back at pathans for making them their b!tches for a thousand year.

no need the NDS will do it besides as one of my Pak muhajir friend who is an ethnic yusfzai Pathan who worked with me in the UAE always tells "Kiran I am a Pathan and kill our enemy only after we give him a feast" seems that is what is happening now just imagine if the Pathan regiment and the Guides cav rebel wouldn't it be fun as for RAW who knows ???? its better to keep quiet then to boast
D

Pathans can't unite on anything for long, let's see if anything good comes out of this.

dhananjay1 said:
Pathans can't unite on anything for long, let's see if anything good comes out of this.
Click to expand...

Do not ever understimate the clan system my friend
D

F-14B said:
Do not ever understimate the clan system my friend
Click to expand...

Loyalty to clan is one of the reason they can't act together as Pashtuns. Mostly it's every clan for itself.

Journalists covering #PashtunLongMarch2Quetta #PashtunLongMarch getting death threats from Private number . In Pakistan you can not hide CLI except Pakistan Army or agencies. You see original number or random digits for international calls.

When will human rights take up the issue straight to paki army about there atrocities committed on these people.?

IBRIS said:
When will human rights take up the issue straight to paki army about there atrocities committed on these people.?

Paki deep state control is tested, Pashtuns get even more radical and the pakjabi on and off the internet are in complete denial about what is happening in Napakiland.

Pashtuns will not fall for ISPR propaganda anymore

Here ISPR is threatening this guy all the times
I was on the ground with a local news channel which was reporting on the massive destruction of farms by hail and rain, a crew member got a call from the Inter Services Public Relations (ISPR) in the middle of the transmission. “You know you are not supposed to be here”

“You come at your will and go at ours. Don’t you know who rules here? This is our territory”, he went on. He continued how he could take me somewhere where no one would find me or find out about what he would do to me. We sat still, in the echo of their intimidating laughs

Hundreds respond to protest call by Pashtun movement
The Newspaper's Staff ReporterUpdated March 27, 2018
Facebook Count217
Twitter Share
23
LAHORE:
Hundreds of supporters of the Pashtun Tahaffuz Movement (PTM), civil society activists and workers of various political parties on Monday responded to a call for protests against the arrest of Fata Political Alliance chief Arif Khan Wazir and three other PTM leaders in Wana a few days ago, and demanded an end to the alleged victimisation of Pashtuns.

The arrests had sparked outrage among the PTM supporters, who took to social media to assail what they termed was discrimination and victimisation of Pashtuns in the country. On Monday, the PTM announced it had countrywide protests in front of press clubs in Peshawar, Quetta, Lahore, Karachi, Islamabad, Zhob, Swabi, Loralai, Qilla Saifullah, Bannu, Ziarat, Dera Ismail Khan, Swat and Hyderabad.

The protesters at the Peshawar Press Club, led by Pakhtunkhwa Ulasi Tehreek chairman Dr Said Alam Mehsud, Aurat Foundation director Shabina Ayaz, and activists Sana Ijaz, Niazbin Malang and others, demanded an end to enforced disappearances and use of alleged coercive tactics to silence those who raised their voice for the oppressed.

They demanded immediate release of PTM leaders and announced that they would march onto Islamabad, once again, and hold a nation-wide sit-in if their demands were not met.
The speakers claimed that coercive measures were being used to stop PTM workers from engaging in peaceful protest, especially in Quetta and Swat, where criminal cases had been registered against their workers.

One of the protesters Ameer Alam Afridi, a brother of Said Gul Afridi, who was killed along with Naqeebullah Mehsud in a fake encounter by former SP Rao Anwar, said that the police had refused to register an FIR in his brother’s case.

“They said that a committee has been formed to look into Naqeebullah’s case in Karachi, but they have refused to investigate my brother’s murder,” he lamented.

In Lahore, nearly a hundred protesters gathered in front of the press club and condemned the crackdown on rights activists and the PTM leaders.

Advocate Ibrar Ahmed said that instead of appreciating the PTM’s stand against terrorism, the authorities were arresting its leaders for raising a voice for the marginalised communities. “We are told that we are valiant and brave because we have sacrificed so much in the war on terror...but we were sacrificed in this war even when we didn’t ask to be sacrificed,” he said.

The protesters held up placards with their demands written on them — End enforced disappearances; Stop harassing and discriminating against Pashtuns; We demand the release of non-violent Pashtun leaders, and Do not claim that our legal demands are anti-state.

Diep Saeeda said activists from Punjab were in solidarity with the Pashtun. “We will continue to protest against coercive tactics used to silence activists,” she said, while announcing a daylong sit-in in Lahore on March 31 to demand the return of missing activists across the country.

A good number of lawyers, civil society activists and workers of political parties gathered in front of the Swat Press Club and demanded release of their leaders.

“Arif Wazir had peacefully demanded the rights of Pashtuns which is a legal right under the Constitution which ensures freedom of speech. We not only condemn the unlawful arrest but also demand his immediate release,” said Muhammad Iqbal Esakhel.

He condemned the attack in Kabul on a sit-in held in solidarity with the PTM.

Women lawyers at the protest said they would back the PTM’s demands at every forum. “We are against every type of terrorism and extremism on our land and fully support the PTM’s demand for peace,” said Mehnaz, a protester and lawyer.

The protesters in Swabi, led by Liaqat Yousafzai, gathered at the Karnal Sher Khan Chowk and marched through Swabi-Jehangira, Link Road and Swabi-Mardan Road.

They declared that their struggle to secure the rights of tribal people and other marginalised communities would continue.

Our correspondents in Peshawar, Swat and Swabi also contributed to this report 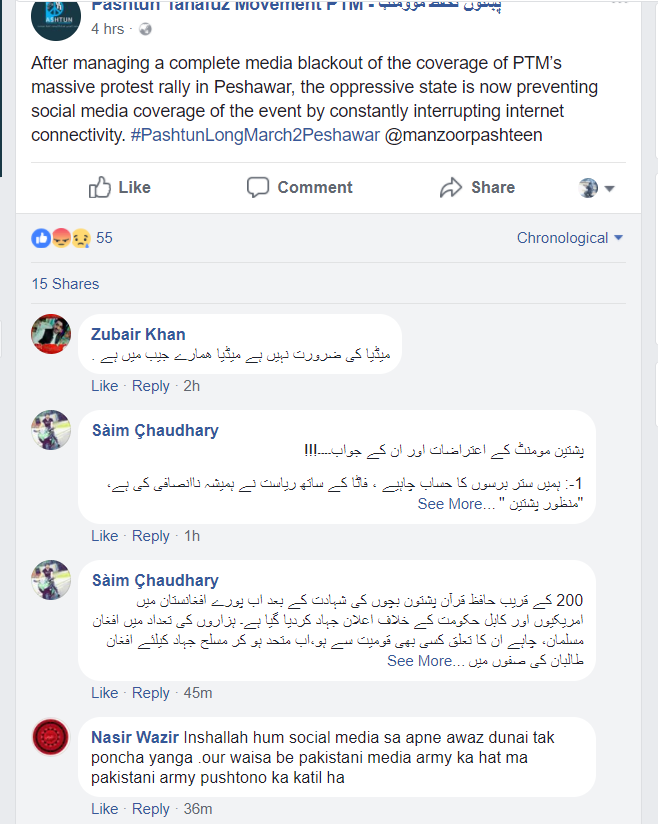 
This has spooked Lal Topi