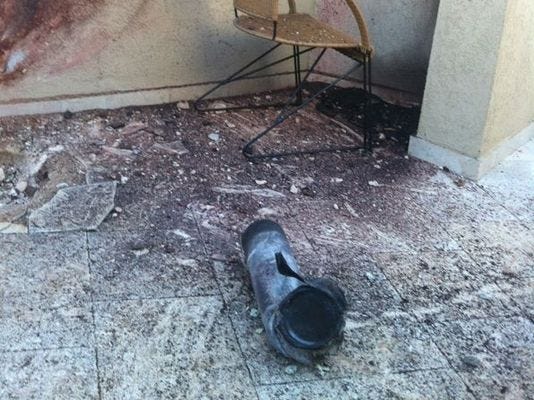 The rockets, which were fired before Obama left Jerusalem for meetings with Palestinian President Mahmoud Abbas, exploded in Sderot, a town close to the Gaza-Israel border.

One of the rockets hit the backyard of a private home, causing damage but no injuries, said Israeli police spokesman Micky Rosenfeld. The other landed in an open field. There were reports that two other rockets landed in Gaza.

As a presidential candidate in 2008, Obama visited the border town of Sderot, which is frequently targeted by rocket attacks fired from the Gaza Strip. No group immediately claimed responsibility for the attack.

Hamas, which the U.S. and European Union designate a terrorist organization, is sworn to Israel's destruction and is opposed to peace talks with Israel. Abbas heads the Palestinian Authority, the internationally recognized Palestinian government in the West Bank.

Gaza rockets fired at Israel during Obama visit
You must log in or register to reply here.
Similar threads
Republic of India - State of Palestine Relations
Saudi Arabia Leadership says "F.O." to Global Ummah ref Palestine
Can someone tell me why exactly are we supporting Palestine?
Obama: US doesn't consider Palestine a sovereign state
Share:
Facebook Twitter Reddit WhatsApp Link