Pakistan's water woes should not be blamed on 'bogeyman' India

Pakistan's water woes should not be blamed on 'bogeyman' India 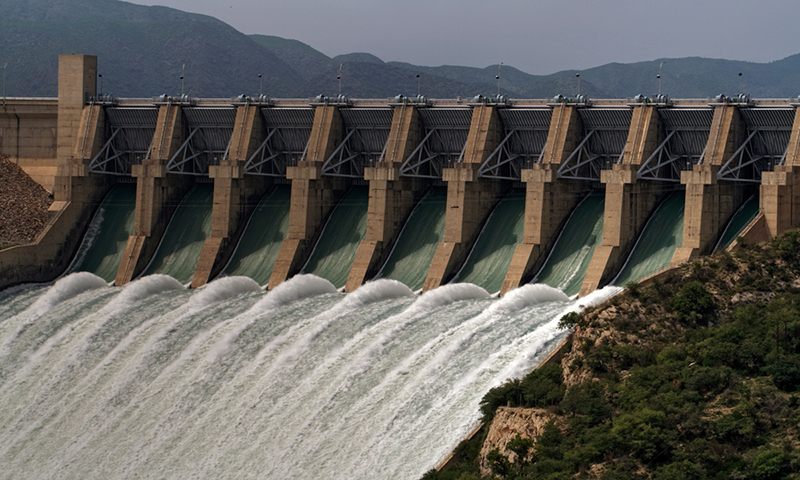 It's not just about dams. Water scarcity poses an existential threat to Pakistan. It also endangers the welfare of Kashmiris in India.

With interests conflicting over water, Indian Kashmiris are objecting to the 54-year old Indus Water Treaty, which they believe is detrimental to their well-being.

As Kashmiris struggle to assert their territorial and water rights against India and Pakistan, the right to use and abuse the water flowing in Indus and its tributaries could get mired in petty politics. Instead, it should be dealt with the aim to conserve and manage water, the scarcest resource in the subcontinent.

The Kashmiri leadership in India is concerned about the control exerted by the Indian National Hydroelectric Power Corporation (NHPC) on developing new hydel projects in the State. In a letter to the Indian Prime Minister, the presidents of the three chambers of commerce in the Indian-held Kashmir recently criticised the decision to award large sums to NHPC to develop new hydro-electric projects.

In addition, Kashmiri leaders want the Indian government to revert control of functioning hydel projects to the State and to have the provision for all future projects be reverted to the State after being in operation for a specified time.

The Kashmiri leaders also want a greater share of the electricity generated in Jammu and Kashmir. They also seek compensation from the Indian government for the missed opportunities to develop water and hydro-electric projects because of the restrictions imposed by the IWT.

The Pakistani side is reportedly objecting to additional hydro-electric projects being built upstream on the three western rivers: Jhelum, Chenab, and Indus, whose waters were primarily allotted to Pakistan under the Treaty.

Specifically, Pakistan has objected to the construction of the 850MW Ratle, 1,000MW Pakal Dul, 120MW Miyar and the 48MW Lower Kalnai hydropower projects on river Chenab. Pakistan has also expressed reservation on Kishanganga Dam being developed upstream on Neelam River.

"Pakistan had asked for changes in the design, especially with reference to the spillways and poundage, which affects the intake location. The intake of water should go up, spillways are low in elevation and these needed to be taken up," reported BBC.

Despite the routine disagreements over the IWT, the Treaty has served the people of India and Pakistan well. Its greatest achievement is the fact that while India and Pakistan have fought traditional and untraditional wars since 1960 over other disputes, they have avoided an armed conflict over water.

Take a look: Water row with India may be taken to ICJ

The Treaty created the necessary institutions for sustained conflict resolution, negotiations, monitoring, and exchange of data and information. Even when the Commissioners fail to agree, the Treaty provided mechanisms to escalate the matter to higher levels of the establishment. When all possible avenues for a bilateral resolution of the conflict are exhausted, the Treaty provides for the appointment of a neutral expert and even for a court of arbitration.

The piles of polarising discourse over the IWT does disservice to the Treaty that was signed in good faith by Prime Minister Nehru and President Ayub Khan in Karachi. It becomes obvious now that the interest and welfare of Kashmiris was overlooked in the process. That explains the recent rise in Kashmiri misgivings for the IWT.

Also lacking in the public discourse is an appreciation of the understanding reached on the use of waters. It does not help when India starts new hydel projects in secret upstream on rivers, whose waters are available to India for restricted use only, or when Pakistan cries foul every time before asserting the facts over what is actually transpiring.

The Pakistani media and those involved in negotiations have created the false impression that India has no right over the waters of the three western rivers – Chenab, Jhelum, and Indus – and their tributaries.

Such assertion is false.

The treaty explicitly made provisions for India to use these water under specific restrictions. The Pakistani media and experts will be well served to review the Treaty in detail, especially Annexure C, Annexure D, and Annexure E, which stipulate the provisions for India to use the waters from the three western rivers for agriculture use, generation of hydro-electric power, and storage.

The devil, however, is in details.

Pakistan has challenged the Indian plans with limited success in the past. For instance, Professor Raymond Lafitte, a Swiss engineer, was appointed as the neutral expert to study Pakistan's objections over the construction of Baglihar Dam. After reviewing the evidence, the Swiss engineer asked for only minor modifications to the Indian construction plans.

Even more interesting is the December 2013 verdict of the Court of Arbitration, headed by Judge Stephen M. Schwebel, which deliberated over the Kishenganga hydel project (KHEP). The Court recognised India's right to develop the Kishenganga hydel project. I will review the details of the Court's arbitration in a later post. However, a couple of important observations are in order.

First, the Court reviewed all evidence brought forth by the two parties and unanimously decided that India would ensure a minimum flow of 9 cubic meter per second (cumecs) downstream of KHEP at all times. The December 2013 verdict was a follow-up to the February 2013 verdict that recognised India's right to develop the KHEP as a run-of-river plant, provided for in the IWT.

Pakistan should not blame India for its own inaction.

The power and water crisis in Pakistan is a direct result of Pakistan's failure to manage its water resources over the past five decades. The construction of earlier large hydel projects in Pakistan were a gift of the IWT that made millions available to Pakistan in aid and loans from the World Bank and $170 million in compensation from India.

While India has also lagged in harnessing and conserving water resources, Pakistan's inability to conserve water resources and generate power is a colossal failure in public policy and governance.

Equally lacking is the human capital in Pakistan to deal with the water and power crisis. Engineering universities in Pakistan have yet to recognise the existential threats faced by the nation. Instead of focusing on water, they are obsessed with computer engineering. Water resource engineering, dam construction, and related topics are only partially covered in the undergraduate engineering curriculum. Hardly any notable doctoral dissertations have been produced in Pakistan on hydel projects.

In 1991-92, I researched the structural damage at Warsak Hydel Project caused by Alkali-Aggregate reactivity in the submerged concreate in the power station. For one year, I travelled to Warsak from Peshawar to study the rehabilitation worked being conducted by Canadian engineers. I was appalled to learn about the state-of-affairs at the Dam.

To my surprise, even the original construction completion report was missing at the Dam. I travelled to Lahore to locate the report that was buried in a small office located on the Ferozpur Road. I made two copies of the voluminous report. I deposited one copy with the Warsak Dam's then chief engineer, Mahabat Khan, and kept the second for my own records.

Also read: $588m accord with WB for financing of Dasu project

Not much has changed since then on engineering excellence in Pakistan.

Review the list of experts brought to testify before the Court of Arbitration for KHEP. Pakistan couldn't find indigenous civil engineering experts to make its case and relied on foreigners and non-engineers. Review page 11 of the final award, where experts representing Pakistan are hairsplitting on the use of regression models, revealing their limited understanding of the subject matter as it relates to the use of seasonal factors in the statistical models to capture seasonality in the water flow. Such ignorance on matters that pose existential threat to Pakistan is unforgiveable.

Whereas India conveniently serves as the bogeyman for Pakistan's domestic water disputes, it has delayed the much-needed arbitration on water resources within Pakistan.

While provinces continue to protect their turf on water and power, the nation continues to lose its potential and is jeopardising the welfare of its future generations.