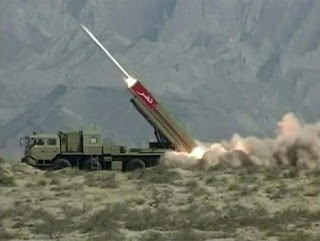 Pakistan's recent testing of NASR or Hatf-9 short range missile, coupled with its rapidly growing stockpile of low-intensity nuclear weapons,
suggests that it is actually preparing to cross the nuclear threshold in case ofa conflict with India. One of world's most authoritative voices on
Pakistan's nuclear strength and American nuclear expert Hans Kristensen said that a nuclear-tipped NASR seemed more like a weapon intended for use against Indian forces advancing into Pakistani territory. "While that wouldn't threaten Indian survival in itself, it would of course mean
crossing the nuclear threshold early in a conflict, which is one of the particular concerns of a short-range nuclear weapon,'' said Kristensen, who is also Federation of American Scientists' Nuclear Information Project director. While the 60-km short range of the nuclear capable missile doesn't threaten the security of any major Indian city, it certainly makes the Indian army and security forces vulnerable in case India
does try to implement its much talked about Cold Start Doctrine, which entails making deep and precise incursions into Pakistani territory in the event of another Mumbai-like attack.

Pakistan clearly seems to be raising the game considering that India will indeed be under pressure to destroy terror camps in Pakistan in the event of another state sponsored terror attack on India. "A NASR would have to drive all the way up to the Indian border to be able to reach important targets in India. Amritsar would be one candidate, as would several smaller cities along the border.

But that would also expose the missile to counter attack,'' Kristensen said as he emphasized that with its rangeof only 60 kilometres, the multi-tube NASR system is not intended to retaliateagainst Indian cities but be used first against advancing Indian Army in abattlefield scenario. Kristensen had earlier described Pakistan's production of Hatf-9 as a worrisome development for South Asia and for efforts to prevent nuclear weapons from being used.