Pakistan has handed hundreds of hectares of land over to China for development of a special economic zone in the port of Gwadar.

Pakistan handed hundreds of hectares of land over to China Wednesday for development of a special economic zone in the port of Gwadar, part of a $46 billion project giving Beijing greater access to the Middle East, Africa and Europe.

The government of Baluchistan province -- Pakistan's poorest -- handed over about 280 hectares of a 923-hectare (2,300-acre) swathe of tax-exempt land that Beijing will develop under a 43-year lease.

The rest of the land will be handed over under the agreement with the public China Overseas Port Holding Company "soon", senior Pakistani government officials told AFP.

The development is part of the China-Pakistan Economic Corridor, an ambitious $46 billion investment plan linking western China to the Arabian Sea, part of Beijing's ambition to expand its trade and transport footprint across Central and South Asia while countering US and Indian influence.

Experts say access to the port of Gwadar will cut thousands of kilometers off the distance which oil and gas imports from Africa and the Middle East have to travel to reach China.

As part of the wider plans, an international airport will also be built with a Chinese grant at Gwadar, with construction due to begin in January.

Gwadar port, located 540 kilometers (335 miles) southwest of Karachi, was built in 2007 with technical help from Beijing as well as Chinese financial assistance of some $248 million.

These people will sell their mothers and wives too for money it seems.

Gwadar is poor. When a house was recently burgled in the fishing settlement on Pakistan’s desert coast, the only items stolen were cans of fresh water – a staple that has soared in value since reservoirs dried up. It lies in Balochistan, a province in the grip of a long-running separatist insurgency and Pakistan’s most neglected.

Yet local officials dream of a future where Gwadar becomes a second Shenzhen, the Chinese trade hub bordering Hong Kong. Visitors are told that with Chinese investment the small settlement will become a major node of world commerce boasting car factories, Pakistan’s biggest airport and a string of five-star resort hotels along Gwadar’s sparkling seafront.

But residents are aghast, and not just because the fishing community, long settled on the neck of the peninsula, will be moved to new harbours up to 40km away.

“This is all being done for China, not the people,” said Elahi Bakhsh, a fisherman bewildered by the plans to turn Gwadar into China’s deepwater access point to the Arabian Sea.
Like others he complains of chronic underdevelopment in a district judged food insecure by the UN in 2009 and a town with only rudimentary health and education services. Bakhsh had not had enough water to wash his clothes in weeks. He and five of his colleagues turned down an offer of tea – the mandatory accompaniment to any meeting in Pakistan – in favour of bottles of mineral water.

“The whole area has been captured by the government with local people pushed aside,” he said.

If all goes to plan, the existing 80,000 population will be joined by another 2 million people over the next 20 years, including 20,000 Chinese residents, according to an official at the Gwadar Development Authority.

It was Dubai, not Shenzhen, that was being touted as the model for Gwadar’s future 10 years ago. But that initiative only succeeded in ruining countless property speculators. Officials say things are different this time because of the China-Pakistan economic corridor (CPEC), a project announced last year with pledges from Beijing of $46bn (£32bn) in investment loans.
It will help pay for the expansion of Gwadar’s currently unused deepwater port and the construction of a road network the exact route of which is subject to hot inter-provincial controversy that will connect the port to the Chinese border 1,800km to the north amid Himalayan peaks.

Pakistan hopes the corridor will turn the country into a critical land route for the world’s second-biggest economy. In theory exporters in Xinjiang will have a much shorter journey to the Arabian Sea and international markets than via China’s eastern ports.


In practice sceptics wonder whether trucking goods over one of the world’s highest mountain ranges will ever be cheaper than existing sea routes. They suspect China is more interested in Gwadar as a potential naval base near the oil supplies of the Gulf.

Ensuring security on long stretches of road in a province wracked by a persistent, low-level insurgency is the biggest challenge to CPEC. Fear of being outnumbered by outsiders from the rest of Pakistan is fuelling a violent rebellion in Balochistan. 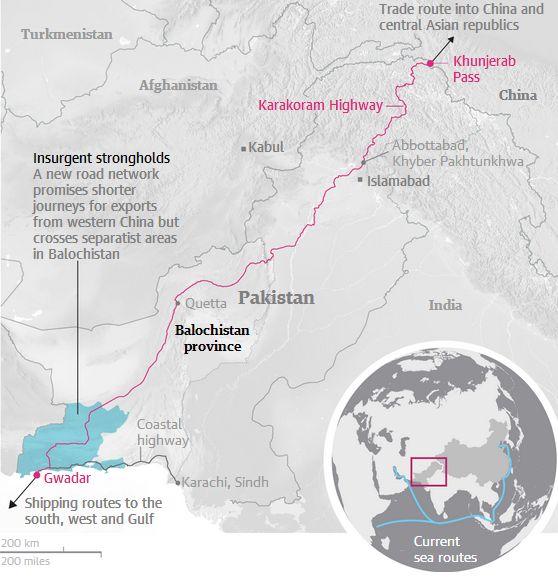 The China-Pakistan Economic Corridor
The Pakistan-China economic corridor is a particular target because separatists see it as a demographic threat to the native Baloch, who are thought to make up just over half of the 8 million people living in the province.

“The corridor passes through what is currently the heart of the insurgency,” says Kaiser Bengali, an economic adviser to Balochistan’s chief minister. He said the notion that the two special brigades formed by the army will be enough to protect road traffic was “laughable”.

“If every convoy of trucks has to be accompanied by half a dozen tanks, armoured carriers and helicopters the cost is going to be exorbitant,” he said.

All five rebellions that have hit the province since 1947 were underpinned by Baloch claims that Islamabad exploits the province’s extensive gas and mineral riches for the benefit of the country’s ruling establishment in Punjab.

Pakistan says arch-enemy India also stirs up trouble. “Foreign adversaries have been more than eager to exploit any opportunity to destabilise Pakistan by harbouring, training and funding dissidents and militants”, said army chief General Raheel Sharif, who joined the prime minister in Balochistan on Wednesday for the inauguration of a section of CPEC highway.
The current rebellion was triggered by the rape of a female doctor by a military officer in 2005. The year before a car bomb killed three Chinese engineers in Gwadar. 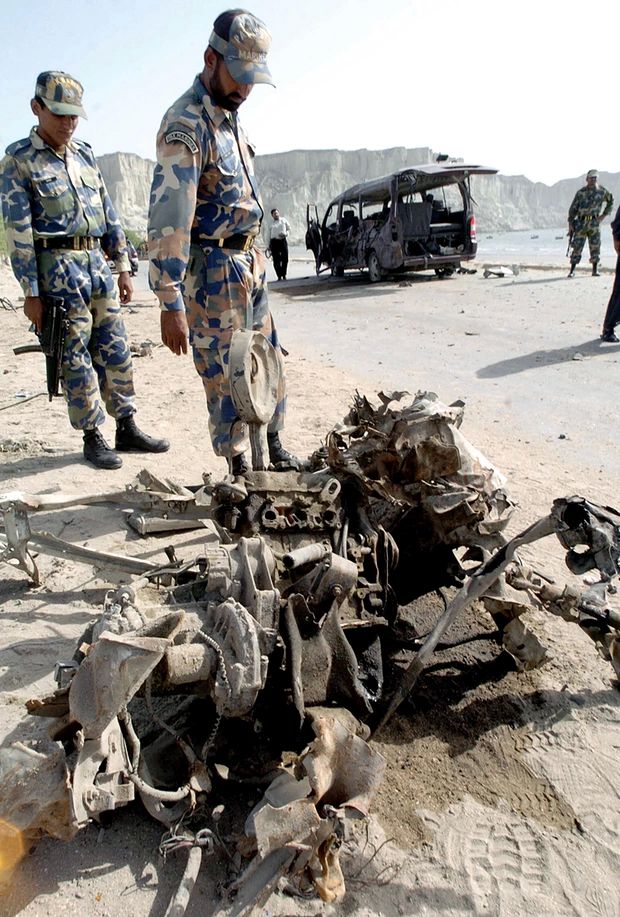 Chinese visitors say they remain worried about security despite the elaborate efforts to keep them safe. Investors and officials from Beijing only move about Gwadar accompanied by military vehicles and only after all the roads have been cleared of traffic. The road is picketed with policemen at 50-metre intervals.

“For the locals it’s like being a prisoner in your own town,” said Shamshad Ahmed a retired army officer who has been coming to the town for years as part of his work at the Pearl Continental, Gwadar’s only five-star hotel that recently reopened after being mothballed for years. “Of course they are not happy about their freedom being taken away,” he said.

The sense of containment will only increase with plans to build a security fence that will completely surround the town as the port is developed. “Everyone coming in will have to show a residency pass so we can keep a record of who lives in Gwadar,” police inspector Chakar Khan explained.
Officials in Gwadar say the main town is safe, even if trouble remains in outlying areas. On 9 January two Pakistan coast guard officials were killed and three injured by a roadside bomb in the district.

Strenuous efforts have been made to secure the thinly populated but vast province, roughly the size of Germany. The military campaign to weaken a scrappy and deeply divided insurgency has had some success and in 2015 separatist violence fell 36% to 194 attacks, according to a tally of press reports by the Pakistan Institute of Peace Studies.

But critics say the army has disastrously mishandled the situation with improved security won at the cost of deepening alienation among the Baloch. Former moderates have been driven into the hands of increasingly intransigent separatists, detractors say.

Road users complain of routine humiliations at checkpoints where busloads of passengers can be detained for hours.
It is the issue of “missing persons” that has caused most anger. Intelligence agents, often accompanied by the paramilitary Frontier Corps, are accused of snatching suspected militants who “disappear” into secret detention sites. Many turn up dead in deserted areas, their dumped bodies often showing signs of torture.

Last year the provincial government revealed the bodies of 800 people linked to the insurgency were recovered between 2011 and 2014. It also estimated 950 people are still missing, although some claims go as high as 14,000 according to a 2013 report by a UN fact-finding team.
Where previous rebellions were led by tribal chieftains in northern Baluchistan who were amenable to cutting deals with the state, the current uprising is dominated by the non-tribal middle-class in Makran, the belt stretching some 200km inland from Gwadar.

And unlike in the past, rebels have targeted non-Baloch civilians. Human rights groups say more than 1,000 such “settlers” have been killed since 2006, including a teacher at a school where pupils were forced to sing the Pakistani national anthem.

Civilians from Makran complain of being caught between the insurgents and the Frontier Corps, who are fighting where the infrastructure for the China-Pakistan corridor is to be built.
“Fighting erupted when work started on the road and we had to flee our homes,” said Shahab Baloch, a shopkeeper from Hoshab who like many others was forced to find safety in a larger town. “People are living in miserable conditions but are too afraid to go back.”

In a sign of the rebels’ enduring local influence just 4% of voters turned out for a provincial assembly by-election in Makran on 31 December after insurgents warned people to stay away from the polls. A brother of one candidate was kidnapped while another had his house burned down.

Those who remain engaged in electoral politics have hardened their positions. Akthar Mengal, leader of the Baluchistan National party (BNP) and a former chief minister of the province, said Pakistan’s leaders “look at us worse than slaves”.
“In their mind we are not a province of this country, we are a colony,” he said. “In the name of development they want to turn us into a minority in our own land.”

Efforts by the provincial government to negotiate a political solution with separatist leaders, some of whom are living in self-exile in Europe, are under way. But civilian politicians say they are powerless to restrain the military’s counter-insurgency operations.

Moderate Baloch leaders meanwhile say any deal with the insurgents must include constitutional protections for indigenous people, particularly in Gwadar where many residents feel more attachment to Oman, which owned the peninsula until 1958. Aziz Baloch, a BNP party official in Gwadar, said a system of work and residency permits should be established so outsiders would be barred from voting in elections.

Some hope the jobs and economic activity created by CPEC will weaken support for the separatists. Many locals are sceptical however, pointing out that people from Baluchistan with its tiny share of the national population, are entitled to only 6% of government jobs and are rarely qualified for the best ones.

A newspaper advert for jobs last March in Gwadar’s fisheries department offered senior, technical positions to Pakistanis from Punjab and only menial roles such as cleaners and guards to locals.
“The suspicion is that all the Baloch will get from CPEC is the right to repair punctures on Chinese tires,” said Bengali, the economic adviser.

Pakistan’s prime minister, Nawaz Sharif, struck a conciliatory tone in December at a ceremony to inaugurate a section of CPEC. He said Baluchistan must have “the first right over all resources which have been explored in the province”.
But he also announced an upgrade for an existing highway running along the sparsely populated desert coast.

It would allow Chinese trucks to head east towards Karachi before going northwards on secure roads in other provinces, bypassing much of troublesome Baluchistan entirely.