Pakistan does not ‘cooperate in anti-terrorism activities’, claims Abdullah Abdullah 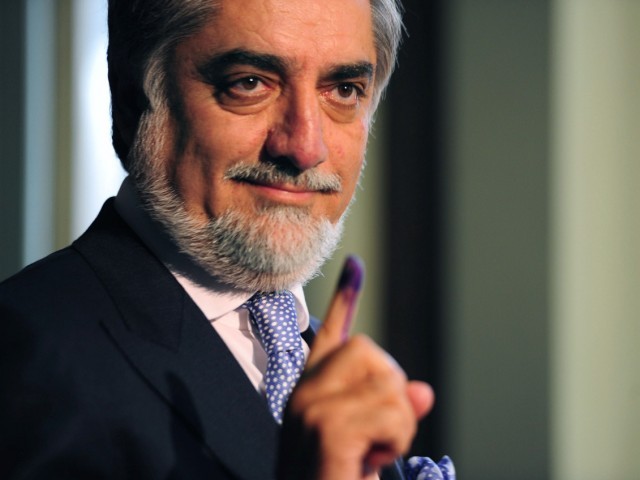 “In regards to Pakistan… in spite of our people’s scepticism, we took bold steps to improve relations, but unfortunately, Pakistan did not cooperate in anti-terrorism activities over the past 10 months as we expected,” Dr Abdullah said at a council meeting of ministers on Tuesday.

“They (Pakistan) issued good statements, but those who commit crimes against our people are financed and armed there,” Abdullah’s office quoted him as saying. “They kept Mullah Omar’s death a secret for two years, and then openly held new leadership meetings in order to restore their identity under the leadership of a new criminal, to gain legitimacy and continue their carnage.”

Despite the allegations, Pakistan had assured on Tuesday it considered Afghanistan’s enemies its own, extending full cooperation to the country in combating terrorism.

“We were told Afghanistan’s enemy is Pakistan’s enemy. What kind of enemy of Pakistan is this? They kill people here and move around freely there?,” Dr Abdullah questioned in the statement, which was emailed toThe Express Tribune, and its excerpts were also released to local media.

Referring to the recent wave of attacks in Kabul and parts of Afghanistan, which killed nearly 70 people over the past few days, the Afghan leader said, “We know who is behind these atrocities, those who plan such attacks are outside the country. Those who take responsibility for these crimes are in Pakistan.”

He admitted the Taliban emerged stronger over the past 10 months as no action had been taken against them.

“Not only has no change been detected in the military machinery of the Taliban over the last 10 months, but it has in fact become stronger… because they don’t feel any pressure, and they are armed and financed, and resort to unfettered mobility.”

As terrorists take responsibility after broad daylight attacks on Afghan soil, no limitations have been imposed on their activities and they continue their shameless attacks, Dr Abdullah said, calling for a review of peace talks with the Taliban following the attacks in Kabul.

Ghani had telephoned Nawaz to discuss possible resumption of peace talks between Kabul and the Taliban.

Nawaz had also expressed sorrow over recent blasts in Afghanistan, and conveyed his condolences over the loss of lives.

Pakis always bully around Afgans and Afgans are sick and tired of it.

On a Paki site I saw Afgans burning Paki flag due to Pak sponsored terrorism in Afganistan and Pakis abusing Afgans.

Pakistan is a land of Terrorists and everyone is sick n tired of them including China and Afganistan.

Lol...have their economy runs on smuggled goods from Pakistan.
Let them boycot.

welcome to the club Mr. Abdullah get in line

Rowdy said:
welcome to the club Mr. Abdullah get in line
Click to expand...

This India hater @Neo has a false sense of national pride and the name of false pride is hating it's own legal Abba aka India.

Look at his sign which he simply pasted without even using his Chinese brain.Seems like he got the disease of COPY-PASTE from his illegal dad China.

And urs on their smuggled drugs

Abdullah Abdullah is a decent and educated man. He would have been friendlier with India, and more pragmatic than the current Ghani, who seems busy extending olive branches to the Pakistanis.

pmaitra said:
Abdullah Abdullah is a decent and educated man. He would have been friendlier with India, and more pragmatic than the current Ghani, who seems busy extending olive branches to the Pakistanis.
Click to expand...

In my telephone call with [Prime Minister Nawaz Sharif on Sunday], I told Pakistan to see terrorism in Afghanistan the same way it sees terrorism in Pakistan," Ghani said.

"I ask the Pakistani government if the mass killings of Shah Shaheed had happened in Islamabad and the perpetrators were in Afghanistan, what would you do?" he said, referring to a Kabul neighbourhood that suffered a fatal truck bombing on Friday.
Click to expand...

Ghani to Pakistan - The breakup.]

@ mods plz delete this post .Sorry i have posted in wrong thread.
@sob
Last edited by a moderator: Aug 13, 2015

@ mods plz delete this post .Sorry i have posted in wrong thread.
@sob[/QUOTE]
Done as per your request.

The sad reality is that Afghanistan is a land locked country and has to maintain relations with it's immediate neighbours.

with Pakistan it has an almost completely porous border and boycotting Pakistani goods will not help them till the route from Iran is fully operational. Even today we need to use Pakistan as a transit to send goods to Afghanistan.

the population of the afganistan is about 30 million

Pakistan ka character derr se samjha ghani ji....... ab to india se haath mila lo.
You must log in or register to reply here.
Similar threads
Does Pakistan Really have nuclear weapons?
Why does Pakistan name its weapons after foreign invaders and Indian Kings?
Why does India have so much trouble breaking the Pakistan - China tie?
WHY DOES PAKISTAN ACCUSE INDIAN SPIES OF TERRORISM?
Share:
Facebook Twitter Reddit WhatsApp Link