Pakistan could be included in immigration ban list in future: White House

WASHINGTON: There is a possibility in the future of including Pakistan in the list of countries from where immigration has been banned, a top White House official indicated on Sunday, acknowledging for the first time that Pakistan was under consideration to be put in that category.

"Now, you can point to other countries that have similar problems, like Pakistan and others. Perhaps we need to take it further. But for now, immediate steps, pulling the Band-Aid off, is to do further vetting for people traveling in and out of those countries," Priebus said.

This is for the first time that the Trump Administration has publicly acknowledged about considering putting Pakistan into that list.

Currently as per the executive order, visitors from countries like Pakistan and Afghanistan are subject to extreme vetting.

Porkistan is a completely dysfunctional state with the army/ISI, their terror proxies and the mullah brigade ruling the roost. They know nothing else other than exporting terror and using it as an instrument of state policy. Porkis from this 'land of the pure', but the fountainhead of terror, should be barred from entering not only the US but every other civilized country on earth.

I wonder what kind of development he is expecting. IED manufacturing? Bomb vests? Madarsas?

Big slap to the face of Indian govt which gives Visas and even citizenship to Porki Muslaman.
T

Lol CIA is neck deep in Afghan and South American Drug trade and afghan drug trade is being carried with full connivance of ISI/pak mil. Why do u think the Americans allowed the entire taliban leadership to escape from Kunduz. The chances of pak/saudi being banned is less than 0. Most likely America faces the possibility of an all out civil war with US military industrial intelligence complex turning against trump and his redneck allies leading to vertical and horizontal ideological split in the country. Meanwhile the radical islamists are having a field day with free propaganda due to foolish act of a man who btw may be in an illicit relationship with his own daughter
T

Bornubus said:
Big slap to the face of Indian govt which gives Visas and even citizenship to Porki Muslaman.
Click to expand...

Absolutely we should ban all visas for porkies. Last time thanks to peace talks we opened up the visa regime only to find ISI agents enter the country and recce for mumbai attacks. 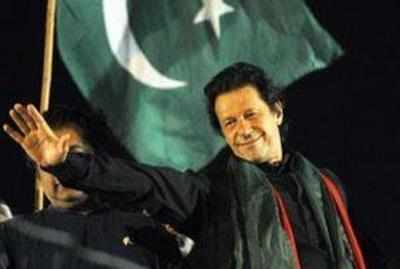 Imran Khan.
HIGHLIGHTS
NEW DELHI: He didn't know this would happen when he suggested it yesterday, but Pakistani politician Imran's Khan wish that Donald Trump include Pakistan on his US travel banlist, may just come true.

The former cricketer expressed this startling wish of his at a rally yesterday of his party Pakistan Tehreek-i-Insaaf (PTI). And hours later, White House Chief of Staff Reince Priebus told CBS News it is possible Pakistan may be added to the list of seven countries whose nationals are barred from entering the US. Preibus said that for now Pakistanis will face "extreme vetting."
But why does Imran want Pakistan on that list? Here's his rationale, in his own words, as quoted by The Nation:

"Now that Trump has become the (US) president, it is likely his travel ban will be extended to Pakistan. I think, to an extent, and I want all Pakistanis to hear it, that he should go ahead and extend the ban to Pakistanis so that we can focus on fixing our country."

That's one way to do things, some would say
The PTI chief elaborated a bit on his wish, The Nation said.

According to him, most educated Pakistanis leave the country because they believe only knowing someone powerful will get them a good job if they stay on.

"The day we bring back the merit system back to Pakistan, all our best citizens will return and work for the betterment of this country," Imran said, adding that the country can only improve if its citizens work for progress, if corruption is curbed and when justice is delivered.

The former Pakistan captain also ranted against his favourite punching bags - Prime Minister Nawaz Sharif, the US and the International Monetary Fund (IMF).

"We will have to fix Pakistan... the day we decide this is our home and we have to fix it, we won't beg for loans from the US and IMF," he said.

About Sharif: "He goes abroad even if he has headache."

And somewhat dramatically, he added that the day Pakistan got a government that is convinced it has to live and die in Pakistan, the country would be fixed.
http://m.timesofindia.com/world/pak...n-on-travel-ban-list/articleshow/56866474.cms

Tarun Kumar said:
Lol CIA is neck deep in Afghan and South American Drug trade and afghan drug trade is being carried with full connivance of ISI/pak mil. Why do u think the Americans allowed the entire taliban leadership to escape from Kunduz. The chances of pak/saudi being banned is less than 0.
Click to expand...

Not only the Afghan Taliban were helped to escape but also senior Porki Army officers who were acting as advisers to the Taliban.

You are right about the Afghan drug trade where the CIA is heavily involved with the help of the ISI. Billions of dollars of drug money are being channeled to US black projects which are beyond congressional oversight. These include Boeing's Phantom Works and Lockheed Martin's Skunk works.

In addition this money is also being used by the CIA to instigate 'regime changes' called 'color revolutions' in the Central Asian Republics and the 'Arab Spring' in the Middle East.

"The War on Terror is a sham. We are just here to guard Drugs for the CIA and Bankers. The American People need to be told."

Two days later Pat Tillman was dead. Executed by 3 shots to the forehead at close range, from a NATO Rifle.

If you are guarding (Opium) Poppy Fields, and you complain, you are “Suicided”

The Taliban Destroyed all the Poppy fields. It was corrupting their country and their youth.

This caused the US Bankers and New York Bankers, to lose $300 million a month in Drug Money.

"Our soldiers are guarding poppy fields in Afghanistan. It’s no secret. Back in 2006, a friend of mine in the Army sent me pictures of British troops doing that exact same thing. Here is one of them."

Here's more interesting stuff in the link below...The truth about the sham 'war on terror' in Afghanistan. Literally an eye opener.....

Exactly. If you see the logic of airlift of Konduz, Americans never wanted Taliban to be destroyed because that would have led to a united Afghanistan. Americans want Taliban insurgency to continue so that billions can be made by contractors in selling drones to US military and CIA can trade in drugs unmolested. The only reason that Americans are crying now is because Taliban is stronger than they thought. Dont buy the bullcrap of American Presidency. America is just like Pakistan, a state led by military intelligence complex along with these contractors. Trump has upset their applecart but most likely these guys will strike back by orchestrating mass protests by radical leftwing liberals and force republican party to impeach him.

Bah, and then crows will fly upside down and cows will leap over the moon.
Its only a matter of time someone walks into oval office and shows donald duck a few videos of him and golden liquids, and then he falls in line.
And of course, there is that small thing about land access to afghanistan. Duck will not be allowed to forget that, surely?

Porkies shall be Humiliated once again but they have hardly any shame left.

Why isn't Saudi Arabia on this list? Most of 9/11 terrorists from Saudi Arabia and osama bin laden.
Sent from my iPhone using Tapatalk

Porkis should go bomb their own country

LETHALFORCE said:
Why isn't Saudi Arabia on this list? Most of 9/11 terrorists from Saudi Arabia and osama bin laden.
Click to expand...

Absolutely right, let's not forget the countries who actually finance them.

LETHALFORCE said:
Why isn't Saudi Arabia on this list? Most of 9/11 terrorists from Saudi Arabia and osama bin laden.
Sent from my iPhone using Tapatalk
Click to expand...

Saudi Arabia is the most powerful Muslim country . They have too much influence with USA.

LETHALFORCE said:
Why isn't Saudi Arabia on this list? Most of 9/11 terrorists from Saudi Arabia and osama bin laden.
Sent from my iPhone using Tapatalk
Click to expand...

Because Mecca and Medina.

As long as House of Saud controls these two cities they control the Muslim world and therefore US of A goes Scot free despite killing hundreds of thousands of Muslims.
You must log in or register to reply here.
Similar threads
Turkey In Talks With 10 Nations Including Pakistan To Sell Its Most-Powerful Drone – Bayraktar TB2 UCAV?
Kuwait bans visa for 5 Muslim-majority nations, including Pakistan
Dhoom 3 being released across the world including Pakistan today
Pakistan Bomber Kills 8, Including Local Official
Share:
Facebook Twitter Reddit WhatsApp Link