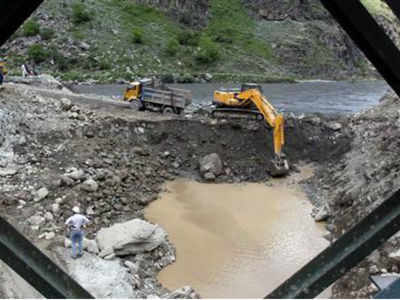 The two projects are being constructed on the Jhelum and Chenab rivers.

A resolution adopted by the National Assembly's foreign affairs and water and power committees also asked the World Bank to set up a Court of Arbitration to mediate the dispute over the Indus Waters Treaty between the two countries.

It said that under the Indus Waters Treaty+ (IWT), it is the responsibility of the World Bank to play its role without further delay.

Until the World Bank constitutes the court of arbitration, it must persuade India to put an immediate halt to ongoing construction of the Ratle dam till the issue is resolved, read the joint resolution adopted unanimously by both the government and opposition members of the committees.

The construction of dams on the western rivers by India has brought the two countries at loggerheads and Pakistan has engaged the World Bank, a facilitator of the IWT, to stop India from going ahead with the construction.

The committees were briefed on the agenda -- Indian threat on the Indus Waters Treaty and to chart out a course of action for Pakistan. The meeting was co-chaired by Awais Ahmad Khan Leghari and Muhammad Arshad Khan Leghari, members of the parliament and the chairmen of the two committees.

Briefing the committees, Foreign Secretary Aizaz Chaudhry said all options were available with Pakistan in case India violated the IWT.

"We will not let India violate the treaty," Chaudhry said, adding that Pakistan had already engaged the World Bank to look into the issue as guarantor.
"We have already requested the World Bank to appoint chairman of the arbitration court," he said.

The secretary said Islamabad would defend its right at any cost. New Delhi, he alleged, was using delaying tactics while "we want to resolve the issue at the earliest".

Should India be listening or turn a deaf ear to Pakistani request. Let us do the latter and continue the work on dams and tell them that work in progress cannot be stopped.

Modi has fast tracked these projects and will be finished before 2019 elections. These projects when completed will be final nail in IWT's coffin and assertion that India has arrived on world power politics.
You must log in or register to reply here.
Similar threads
At UN, Pakistan asks India five questions over Kashmir situation
Hafiz Saeed asks Pakistan military to send troops into Kashmir to teach India lesson
India slams Pakistan for atrocities in PoK and Balochistan, asks Ministers to globally EXPOSE Pak
India calls Pakistan 'prime sponsor of terrorism', asks it to vacate PoK
Share:
Facebook Twitter Reddit WhatsApp Link