Pakistan Army: aal is not well

India's evident climb-down at Thimphu, and Islamabad's barely-concealed glee at resuming a dialogue process that was never going anywhere, should not obscure the big picture. From the strategic perspective, Pakistan today remains exactly where the most hawkish Indian analysts would want it: diminished on the Indian border; and locked in bloody combat on its western reaches.

It is difficult to miss the irony: on the subcontinent's northwestern frontier --- the gateway to India for Alexander, Timur, Ghor, Ghazni and Babar --- an alphabet soup of radical militants that ultimately threaten India are being held back by the Pakistan Army.

This stems not from any new love for India but from a long-delayed realisation amongst the generals, primarily army chief Ashfaq Kiyani, that the most immediate target in the militants' cross hairs is the Pakistan Army, not India. The game has changed dramatically in the tribal areas of Khyber Pakhtunkhwa, as the North West Frontier Province (NWFP) was renamed last month. Rawalpindi's traditional modus operandi since 2006 ---- rattling a few sabres while negotiating a truce with the militants --- is no longer an option. The Pakistan Army is now in a serious fight.

During earlier years, while Islamabad played faint-hearted footsie in the tribal areas with jehadi groups like the Tehrik-e-Taliban Pakistan (TTP), the world was carefully excluded from the tribal areas. With less to hide now, the Pakistan government has even dared to conduct a posse of Indian journalists through Khyber Pakhtunkhwa, where 150,000 Pakistani regulars beef up as many paramilitary scouts in manning 821 posts on the border with Afghanistan.

Given these circumstances, it is astonishing that anyone is buying into the ludicrous argument that things are going Pakistan's way in Afghanistan and the tribal areas. The argument, which a beleaguered Pakistan Army is doing all it can to buttress, goes broadly as follows: with Obama looking to thin out forces substantially from Afghanistan before facing American voters in late 2012, the job of policing the AfPak badlands will fall into Islamabad's lap. With a free hand to run the place, Pakistan's Inter-Service Intelligence Agency (ISI) will carry the Taliban to power in Kabul and then douse the flames in its tribal areas by reorganising it into a terror factory from where it can direct jehad towards India and the west.

This monochromatic argument fails on many counts. Even if handing over Afghanistan to the Taliban were as simple as loading the Quetta Shoora into trucks and driving it to Kabul, Islamabad no longer desires an unfettered Taliban in total control of Afghanistan; when the Taliban ruled from 1996-2001, Islamabad's relations with that prickly animal were far from smooth. Pakistan now sees greater benefit in a splintered Afghanistan where power is delicately distributed: a beholden Taliban in charge in the south; and a weakened Hamid Karzai in Kabul, dependent on Islamabad for key elements of power.

Islamabad's wooing of Karzai has been under way for months and is yielding dividends. In March, on a visit to Pakistan, the Afghan president termed Pakistan a "twin brother" without whom peace could not be restored to Afghanistan. It was not a mere diplomatic flourish.

But even with the Taliban and Karzai willing to play ball, Islamabad realises that calibrating and maintaining a balance of power in Afghanistan will not be easy. Calling all the shots in Kabul is clearly unachievable; Pakistan's more limited aims are to keep India out of Afghanistan, and to keep the lid on the Pashtunistan issue.

If Islamabad faces a tightrope walk in shaping Afghanistan's political power structure, manipulating militancy presents an even thornier problem. Pakistan's skill at organising purpose-built jehadi structures has resulted in chaos as the boundaries between militant groups effectively dissolve. Increasingly, a plethora of groups including the Pakistani Taliban; Afghan Taliban factions like the Haqqani group; foreign groups from Uzbekistan, Arabia and Chechnya; sectarian militias like the Lashkar-e-Jhangvi; and the erstwhile India-centric groups like the Jaish-e-Mohammad and the Lashkar-e-Toiba; all train, plan and even operate in coordination.

The Pakistan Army's and the ISI's growing isolation from these groups is evident from a series of fidayeen and suicide attacks on army targets, including the General Headquarters in October 2009. Two months later, militants stormed a Pakistan Army mosque killing dozens, including the young son of Lt Gen Mohammad Masood Aslam, the corps commander who oversaw operations in Khyber Pakhtunkhwa. Militant groups are increasingly attacking the ISI; coordinated attacks have been launched on ISI offices in three cities.

Longstanding linkages still remain between the Pakistan Army and the jehadis it midwifed. And, where both sides find a convergence of interests, they can still work together. But only in India does the belief still run strong that the Pakistani establishment controls and directs the jehadis in a meaningful way. In fact, so much blood has already flowed that the "ISI's terror factory" thesis is simplistic and outdated.

Despite the Pakistan Army's unenviable plight, it inexplicably believes its upbeat rhetoric about victory just ahead. But just as the J&K insurgency roiled on through years of upbeat Indian Army assessments, the Pakistan Army too will find itself embroiled in prolonged operations on its west. The Indian Army is large enough to contain multiple insurgencies while still retaining a formidable warfighting capability. That is not the case with Pakistan. 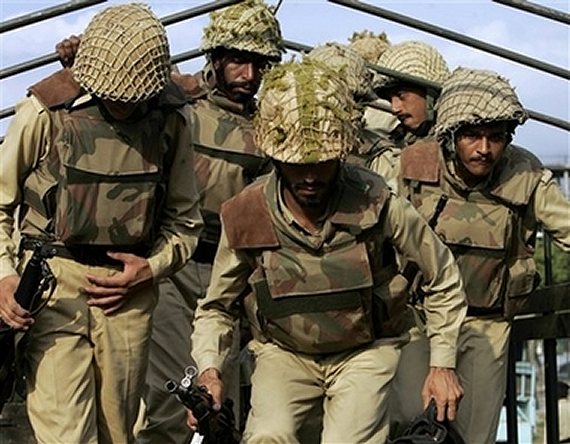 About 150,000 Pakistani soldiers are engaged in operations in Khyber Pakhtunkhwa. This includes formations that have long been deployed along the Indian border