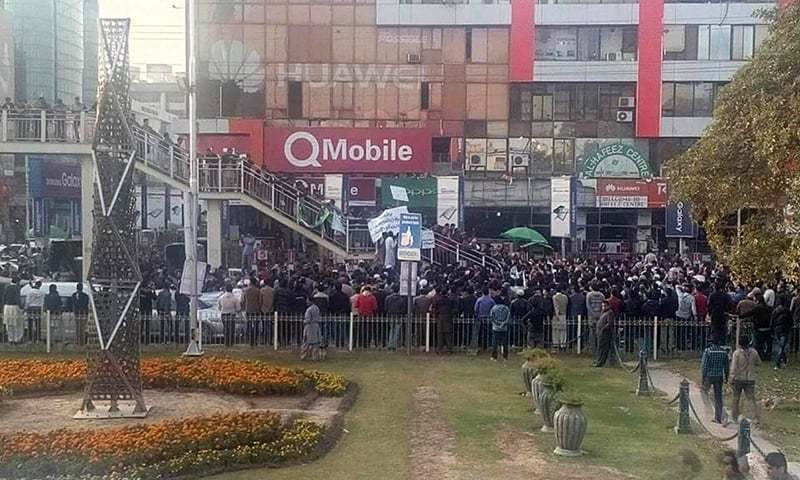 Dozens of people from Hafeez Center gathered opposite the center, holding placards and chanting slogans against the arrest of shopkeeper Abid Hashmi and the filing of a case against him.

According to reports, the suspect, Abid Hashmi, was granted bail by a magistrate.Magistrate Zafar Farid Hashmi granted bail to Abid Hasan Hashmi against Rs50,000 surety bonds.

The magistrate observed that the matter needed to be further investigated.

A large number of traders and shopkeepers from Hafeez Centre, Hassan Tower, Pace and other markets and commercial areas in the area gathered outside Hafeez Centre at Gulberg’s Main Boulevard. They carried banners, posters and placards inscribed with slogans against the government and the Police Department

The arrest came after an outcry on social after a photo of the notice was uploaded.On Monday, hundreds of shopkeepers took to the streets in Lahore and called for the release of Abid Hashmi. – NML

So the agenda of these people is same -> Ethnic cleansing of all minorities including Hindus/Sikhs/Christians/Shias/Ahmedias.


@Neo @Raja.pakistani @Zarvan @musalman : What do you want to say here? When would you make the population of Pakistan reach 100% Sunni by ethnic cleansing of all minorites???

Pakistanis will never have entitlement to preach Indians on intolerance, democracy and freedom of religious practice. Wherever one sees them preaching Indians they must be digitally or physically slapped without any guilt.

The kind of prosecution of minorities that is happening in Pakistan is nothing new. They know no other way but coercion, seize, torture and con to harass non Muslims to convert or make them inhumanly recessive part of society. To abduct, rape and sexually assault non Muslim women is another tactic in the book they have mainstreamed into minds of average fanatic they breed in large number.

There are thousands of Hindus who are fleeing their cursed country and applying for Indian citizenship as we speak.

As far as Ahmadis are concern then I can see most of them have already been broken to toe the line. It is a long term project to bring them back into Sunni cult. Having said that I have no much sympathies for them because they were at the forefront of demanding a separate Muslim nation and partition of India.

Today many sect of Islam are living a good life in rest of India and thriving without such fears from within, except Kashmir which has gone to the dogs as they started getting bad influences from Pakistan.

Ahmadis as I personally know (one is my good friend from Fiji) and back home in Ludhiana, Malerkotla and Ahmednagar are prosperous hardworking community who despise what is happening in Pakistan.
You must log in or register to reply here.
Similar threads
Prep: Indo-Pak War Game Simulation
News> Sports > Cricket Is Pakistan hiding coronavirus cases due to PSL? Pak government offic
How Pakistan’s Generals Turned Pak Into An International Jihadi Tourist Resort
Pak Navy Watch
Share:
Facebook Twitter Reddit WhatsApp Link