Islamabad: In a jolt to Pakistan's Interior Minister Rehman Malik, the country's Supreme Court today suspended him from the membership of Parliament on the ground that he had failed to provide proof of renouncing his British citizenship.

A three-judge bench led by Chief Justice Iftikhar Chaudhry issued the interim order while hearing a petition challenging the dual nationality of several members of the two Houses of Parliament.

The bench had earlier given 60-year-old Malik time till today to produce a declaration issued by the UK Border Agency regarding the renunciation of his British citizenship.

We will finish our term, no question of PM resigning: Rehman Malik
Mr Malik's counsel submitted various documents and declarations to the Supreme Court but did not furnish the declaration from the UK Border Agency.

The counsel was given a final opportunity to provide the document by this afternoon.

When the bench assembled after a recess of an hour, Mr Malik's counsel again failed to submit the declaration. The court then issued the interim order suspending his membership of the Senate or Upper House of Parliament.

The Supreme Court asked Mr Malik to prove by the next hearing on June 13 that he was not a British citizen when he contested polls to the Senate in 2008.

If he is unable to do so, the court will take further action against him, the order said. The interim order, however, did not state whether Malik could continue as the Interior Minister.

Legal experts said Mr Malik could not function as a minister after the suspension of his membership of Parliament. In the past, he had functioned as a Special Advisor on Interior to the Prime Minister before being elected to the Senate.

Referring to documents submitted by Malik's counsel, the court had pointed out that one declaration stated Mr Malik had renounced his British citizenship in March 2008 while another stated this was done in April 2008.

The court acted against Mr Malik on the basis of Article 63 (1c) of the Constitution, which states that a person will be disqualified as a member of Parliament if he or she "acquires the citizenship of a foreign state".

Mr Malik had acquired British citizenship while living in self-exile in the UK in the 1990s.

He reportedly has a controlling interest in some businesses in Britain, including a private security firm.

They have been asked to respond to the notices by June 13.

Earlier, the Supreme Court had suspended the membership of Parliament of Farahnaz Ispahani, the media advisor to President Asif Ali Zardari, for holding US citizenship.

During today's hearing, Attorney General Irfan Qadir objected to the action taken by the apex court.

He said the court should refer the matter to the executive authority as it does not have the power to take action against lawmakers with dual nationality. 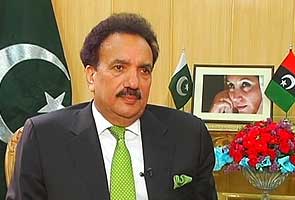 My prediction came true. There are so many in pak parliament who are foreign national. No wonder pak is in this mess today

So this bloke is a British citizen?

Too many foreigners are participating in the subcontinental politics and governance.

So this bloke is a British citizen?

It is an uncomfortable thought that foreigners are participating in the subcontinental politics and governance.
E

PM appointed him as an "advisor to PM on Interior"

According to well-placed sources, Prime Minister Yusuf Raza Gilani, who is presently in Quetta, has taken a prompt decision to make the stop-gap arrangement.

Taking the PPP's apex leadership as well as the allied parties in confidence, the Prime Minister has directed the Cabinet Division to issue the notification appointing Malik as Advisor to the PM on Interior Affairs.

"The Division is most likely to issue the notification any time from now," the sources added.

The government reacted to Supreme Court's interim order in the dual nationality case swiftly as the Interior Ministry is serving as pivotal to the prolonged war on terror besides law and order being one of its paramount functions, the sources added.

The PPP government allocated Malik the Interior Ministry as soon as it took over after winning the 2008 elections. Since Malik was not a member to the Parliament at that time, the government appointed him as the PM's Advisor on Interior.

Later on, the PPP leadership got him elected as Senator on 27 April 2009. Thus, on the very same day he took oath as Interior Minister after getting membership to the Upper House of the Parliament. It is pertinent to note here that to be a federal Minister one has to be a member of the either house of the Parliament.

ISLAMABAD : The Supreme Court bench hearing the Dual Nationality case, has ordered a petition to be admitted by the registrar's office, alleging that 14 more members of the national and provincial assemblies hold dual nationalities.

The petition has been filed by former president of the Rawalpindi Bar Association, while notices have been issued to the 14 lawmakers.

Even Rehman Malik is not safe in PAK ...

lcatejas said:
Even Rehman Malik is not safe in PAK ...

Blackwater said:
he is safe .he wont go anywhere, he has become interior adviser to pm lollllllllllllllllll
Click to expand...

I always thought our politicians were the best in the game, but the Pakistanis out do us.

Anyways, how is their opposition reacting to Rehman Malik being made the advisor on internal security?

thakur_ritesh said:
I always thought our politicians were the best in the game, but the Pakistanis out do us.

Anyways, how is their opposition reacting to Rehman Malik being made the advisor on internal security?
Click to expand...

I think that the Pak Supreme Court is wrong.

Malik's accent when speaking English in no way give it out that he was ever near Britain.

Ray said:
I think that the Pak Supreme Court is wrong.

Malik's accent when speaking English in no way give it out that he was ever near Britain.
Click to expand...

you r right,citizenship of Britain is only for emergency (escape route) when army comes in power.