This is Part 2 of a two part series on Operation Jackpot. Part 1 can be found here

On 27th July, 1971 at 6:30 pm, the commandos started their journey from Port Canning Matler towards Mongla. A about 10:30 pm, they arrived at the Ichamati river on the Indo-Bangladesh (Indo-Pak) border.

Out of the 15 boats, Commander Raman’s was the third one. 7 commandos were on board equipped with 1 light machine gun,

While crossing the river, commandos heard the sound of a motor boat. They were under strict orders not to engage any enemy target unless it was necessary. Fortunately, the boat ignored them.

The commandos managed to cross the river at around 11:30 pm without any other incidents. 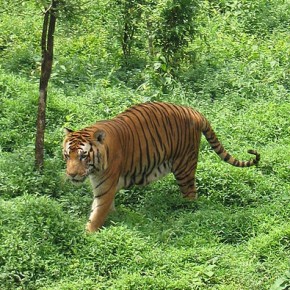 A Royal Bengal Tiger
The characteristic tree of the forest is the Sundari (Heritiera fomes), from which the name of the forest has been derived. It yields a hard wood, used for building houses, making boats, and making furniture. New forest accretions are often conspicuously dominated by Keora (Sonneratia apetala), and other tidal flora. It is an indicator species for newly accreted mudbanks, and is an important species for wildlife, especially the Spotted Deer (Axis axis). There is abundance of Dhundul or Passur (Xylocarpus granatum) and Kankra (Bruguiera gymnorrhiza), though their distribution is discontinuous.

Mangroves are a transition from the marine to freshwater and terrestrial systems, and provide habitat for numerous species of small fish, crabs, shrimps and other crustaceans that adapt to feed and shelter, and reproduce among the tangled mass of roots, known as pneumatophores, which grow upward from the anaerobic mud to get the supply of oxygen.

They reached Patkhali at about 6:30 pm to restock and resupply. At the market shouts of “Joy Bangla!” could be heard.

The commands were crossing a small river, when a Royal Bengal Tiger started swimming towards the boats! The navigator fired one ENERGA rifle grenade at the tiger. The whole forest echoed with the sound of the explosion.

The tiger was killed.

From the 5th day Commandos had to eat tinned food and for a whole day, each commando's meal was just one small tin of beans. This continued until the 18th day. It became very difficult for commandos to pull their boats by eating such food. Most of the time many commandos could not drink at all for whole day.

The commander and second-in-command had a special job to hear the radio every day from 6:00 am to 6:30 am and 10:30 pm to 11:00 pm. Although the commandos became very tired, they pulled the boats through the deep forest as fast as they could as per the navigator's instructions.

Answering nature's call was another problem. Most of the time the boats had to stop so that the commandos could relieve themselves. However, it was not that easy to sit and defaecate because pneumatophores jut out of the soil, and upon contact, feel like needles. These can be as big as as 3 cm to 7 cm in the coastal areas of the forest.To go deep inside the forest was another problem for due to presence of tigers. If confronted by a tiger, it would have to be shot dead and the sound of firing would have alerted the nearby Pakistan Armed Forces or Razakars. All such problems were tolerated by the commandos and no further problems were confronted by commandos during their journey to Mongla port. On the 18th day, at about 6:00 pm, the commandos arrived at the Shibsha river, a river which is connected to Mongla river.

Location of Mongla port and Sketch of Operation

It was formerly located at Chalna, about 11 miles (18 km) upstream on the Pusur river, but it is now located 48 km south of Khulna city, as established in 1954. It lies about 62 miles (100 km) north of the Bay of Bengal and is connected to the major inland river ports and to the rail terminal at Khulna. Mongla Port is situated on the East Bank of Pusur river near the confluence of Pusur and Mongla rivers, at a channel distance of 71 nautical miles from the Fairway Buoy situated (210° 26.9' N, 89° 34.4' E) in the Bay of Bengal. 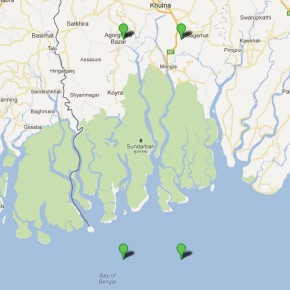 Sketch of Operation Jackpot
Mongla port is situated on the left side of Shibsha river, which is the Dhangmari marshland. The commandos crossed the Shibsha river and assembled behind the Mongla port through the Dhangmari marshes and finally reached the left flank of a landlor's house. Here, they took the shelter for the night, which was 13th August, 1971. The warning song was played .

There were six ships berthed in Pusur on the side of Dhangmari and another 7 ships on the other side of Pusur River. A Chinese ship was just arriving at that time from the other side of the river. There was Bania Shanta, a well-known red light district, where the commandos saw many foreign sailors and Pakistani soldiers.On the left side of Bania Shanta, there was a trench of Pakistan Army that lay just opposite to the Somalian ship SS Lightning. Behind Bania Shanta lay the Mongla dam, which was about 4 meter high from main land and started from the side Dhangmari, going further to the south towards the Bay of Bengal, to stop the possible flood and salty water from flowing to the Dhangmari paddy fields.The Pusur river is located near the estuary of Bay of Bengal, and had strong currents. The river is infested with crocodiles and sharks. The local inhabitants neither bathed in the river, nor kept their feet in the river water for a long time.They have had bad experiences of crocodile and shark attacks.


The commandos made the sketch for an hour, and about 3:00 am, returned to the landlord's house. Every inch was guarded by C and C commandos and they afforded full rest to the Naval commandos from the night of 13th August, 1971.

On 14th August, 1971, the action song was played at 6:45 am. Commander Aminur Rahman Khosru alerted the other commandos for the operation. He said that they had got the signal from the HQ that they might have to start the operation within 24 hours. That night, at 10:45 pm, the action song was played twice (the announcer at Akashvani said that due to broadcasting snags they were playing the song again). After being confirmed, Aminur Rahman Khosru asked the commandos to fall out of the landlord's house and informed all the commandos that they were going to do the operation in Mongla port that night. After this, all joined in a special prayer to Almighty Allah and offered two Rakat Gayebi Janaja prayer (two Rakat means twice).

Gayebi Janaja is a special prayer offered by Muslims before a deadly attack or suicide attack, because, before burying a deceased Muslim, Janaja Namaaz is offered twice, and for these commandos headed to a suicide mission, there would be no time to pray their second Rakat Namaj . Such kind of an advance Janaja is prayed with an intention that, if the person offering Janaja prayer does not return from the operation, then there should be peace on his soul from the Almighty Allah. There was a special prayer for the success of Mongla operation and of all operations of the Bangladesh Liberation War. Just at 00:01 am on 15th August, 1971, the 15 boats started for Mongla. 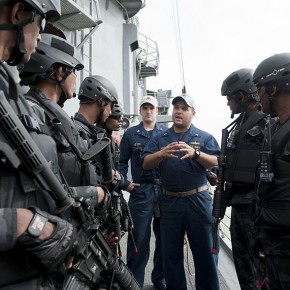 Recent image of Bangladesh Navy SWADS.
Navigator Afzal was in very bad mood since the evening. He misguided the commandos for 3 hours. Although from the landlord's house, Mongla port, along with the lights of the ships, is visible, due to the vast streches of the marshlands, it’s not easy to pull a boat directly to the port. In such situations, if boat pullers make a mistake, they might end up in the Bay of Bengal. In order to avoid that, the navigator was brought along with the commandos.

At about 4:00 am, the commandos arrived at the port. The last time of arrival at Mongla port was decided between 1:00 am and 2:00 am. By that time all the sea and river ports of East Pakistan were attacked as per master plan of Operation Jackpot, but that was not known to any one of the commandos.

Aminur Rahman Khosru, along with fellow Second-in-Command of Naval commandos Mr. Raja, and 2 Vice Commander of C and C Commandos Mr. Khijir, that the commandos shall attack only 6 ships as dawn was approaching. Although it did not rain on the morning of the operation, the sky was cloudy and it had been raining for past 3 days continuously. 24 commandos were asked to join the operation by the commander. These commandos were divided into six mini groups.

Each mini group had a group leader, who had the job to cut the cables of the ships. As the sky was cloudy, it was bit dark, so as per the decision of the commander, the commandos attacked 6 ships which were berthed on the Dhangmari side. It had been decided that commandos will push the delay switch at 5:30 am and the commandos dived into the Pusur river at 4:30 am. Besides putting limpet mines in the designated place of each ship, there was a special assignment for each mini group leader. It was very risky job, because, one had to jump out of the river to catch the cable of the ship, and then climb on it, and after that, set the cable cutting charge on the cable and break the delay switch .

While the Naval commandos were operating in Pusur river, the C and C Commandos setup a strong covering base from the other side of Mongla dam.The whole 236 commandos were divided in to 66 mini groups and every 100 feet, they positioned 3 to 4 commandos with heavy weapons to give necessary covering fire. Both Mr.Raja and Mr. Khijir came until half feet inside Pusur river with LMG in their hand to rescue and to welcome the commandos after the operation. Commander Aminur Rahman Khosru, along with two other commandos, dived into the water just a few feet away from a Pakistani bunker opposite to SS Lightning. Commander Aminur Rahman Khosru and other two commandos successfully mined SS Lighting, a 7000 Ton Somalian Ship. From 6:00 am to 6:20 am, the commandos arrived in RB

From 6:00 am onwards, the cable cutting charges went off, and from 6:30 am onwards, the limpet mines started to detonate. The mines exploded at the ships, and the cable cutting explosives cut the cables of the ships and flew up to 500 feet in the air. All the ships at the port were giving danger sirens continuously. Within half an hour, 4 PAF fighter aircraft came to Mongla port and flew over the port 6 times. The PAF aircraft could not trace the commandos and to take the revenge the PAF aircraft started strafing the villages near Mongla and killed many innocent villagers.

Operation Jackpot on 15th August, 1971, was fully successful. The naval commandos mined six foreign-owned ships. These were one Somali, one US, two Japanese, one Chinese, and one Pakistani Ship berthed at the Dhangmari side (Bania Shanta), which were sunk with 30,000 tons of arms and ammunition and other military supplies for the Pakistani Army, by the end of the operation. After the operation, the commandos retreated and returned to the landlord's house; and from there, they moved to a nearby village by evening.

The news also said a US Ship has been damaged in Mongla and that foreign ships are no longer secure in East Pakistan.

After the operation, 12 commandos were asked to destroy the radio microwave transmitter of Khulna. Among them were Sirajul Islam, M. Aziz, Aftab Uddin, and Rafiqul Islam, who were caught by the Razakars near Budhata and killed after brutal torture. Nothing further was heard about the remaining 8 commandos.