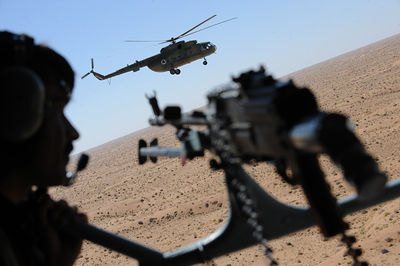 An Mi-17 helicopter prepares to land during a flight test for Afghan air force pilots, led by the U.S. Air Force in Kandahar, in October.

As part of its effort to equip the militaries of Afghanistan, Iraq and Pakistan, the Pentagon has in recent years been snapping up helicopters and fixed-wing aircraft from the arsenals of its former Cold War rivals, including Russia. The goal is to help the three countries build air forces that are rugged, affordable and easy to operate.

Washington sanctioned Rosoboronexport, Russia's state arms dealer, in 2006 for its dealings with Iran, and lifted those restrictions in May as part of an effort to win Moscow's support for new Iran sanctions.

But even as the move could open the door to more purchases of Russian-made helicopters, U.S. lawmakers are complaining about a lack of oversight of the procurement process and asking the military to consider buying more American-made aircraft.

A Department of Defense spokeswoman said the Pentagon had received "several inquiries" from lawmakers about the purchase of Russian-made Mi-17 helicopters, adding that the department issued a report to Congress in March addressing the issue.

"Analysis conducted by [U.S. Central Command] in 2005 identified the Mi-17 as the most cost-effective means—at the time—for addressing the operational requirements of Iraq, Afghanistan, and Pakistan," the spokeswoman said.

The Mi-17 helicopter is a workhorse transport aircraft seen as versatile and easy to maintain. The U.S. has spent more than $800 million over the past several years to buy Mi-17s; a single Mi-17 costs around $12 million, according to the State Department, although figures vary depending on the contract, and congressional critics say the price tag can be higher.

The helicopters are mostly used for airlifting troops and equipment to fight insurgents in remote regions.

Richard Aboulafia, an aviation analyst with the Teal Group, an aerospace and defense consultancy, said Soviet-bloc aircraft are "cheap to operate because of simplicity of design," and the militaries of these countries have "worked with them before."

Acquiring such aircraft wasn't easy after the 2006 ban on trade with Rosoboronexport. To meet the Pentagon's orders, private companies acquired civilian-model Russian-made helicopters and converted them for military use, said people familiar with the transactions.

With the lifting of the sanctions, more Russian helicopter purchases could be in the works. Following a June meeting between President Barack Obama and his Russian counterpart Dmitry Medvedev, the two sides announced in a joint statement they were "working on the possibility of assisting Afghan security forces by supplying Russian-made helicopters and spare parts." The Pentagon declined to provide further details.

The U.S. military's efforts to help its foreign allies build low-budget air forces are facing increased scrutiny in Congress, with some lawmakers questioning the approach. The Mi-17 procurement "either had uncoordinated oversight or simply none at all" by the government, Sen. Richard Shelby (R., Ala.) said in an interview. "The results have led to massive waste, cost overruns, schedule delays, safety concerns, and major delivery problems," he said. He urged the government to "analyze alternative airframes, and select the best helicopter for the mission."

In response, the military has argued that Mi-17s could be procured relatively quickly, while the production lead time required to get U.S.-made alternatives to field was lengthy, in some cases two or three years.

Some U.S. lawmakers want the government to consider buying American-made equipment to support the U.S. economy. The House version of the fiscal 2011 defense-authorization bill says U.S.-made helicopters should be among the options when the U.S. considers buying aircraft for the Afghan air force.

Pakistan has received 10 Russian-made helicopters at U.S. taxpayer expense, and U.S. counterinsurgency funds have paid for the overhaul of a dozen Pakistani Mi-17s.

Iraq's military operates a fleet of 18 Mi-17s, with another 22 on order, eight of which were paid for by the U.S. government. The Department of Defense has bought 31 Mi-17s for Afghanistan's security forces, and the pending defense budget for fiscal 2011, beginning in October, includes a $180 million request for the procurement of 10 additional Mi-17s for Afghanistan.

"I would love to transition this to all-Western [aircraft], as a U.S. pilot and aviator," said Air Force Brig. Gen. Michael Boera, who oversees the effort to strengthen Afghanistan's air forces. "But the fact remains I need to make decisions based on what's best for the Afghans."