Oil and the 'merciless' Brahmaputra

Oil and the 'merciless' Brahmaputra


For most of the past decade, angry villagers in the Rohmaria region of India's north-eastern state of Assam have not allowed exploitation of rich oil deposits.

They are upset with the Assam government - and Delhi - for failing to protect the villages of Rohmaria from the deadly erosion of the mighty Brahmaputra river.

"We have nothing against Oil India Limited. But we launched the economic blockade against their oilfields to force the government to undertake bank protection and anti-erosion work," says Ghanen Gogoi, secretary of the Save Rohmaria committee.

"If you pull the ear, the head will follow," Mr Gogoi says.

"The Assam government has done nothing. Neither has Delhi. Prime Minister Manmohan Singh came here before the 2006 state elections and promised action, but we continue to suffer acute bank erosion," says Rohmaria villager Gopal Saikia.

Thirty-eight villages in the Rohmaria region have been swallowed up by the Brahmaputra in the past three decades.

A government silk farm, a major portion of a key road and two tea estates have vanished into the river, district officials say.

More than 300,000 villagers, one-time well-off peasants, have been displaced and now live in abject poverty. The rest fear their luck will also run out soon.

"We pray to God to save us but this river is merciless," says housewife Dipali Gohain, whose small mud house is now barely 500m from the Brahmaputra.

"Another year and we will be beggars on the streets," says Ms Gohain, two toddlers in her lap.

Such frustration has fuelled anger.

"We will not allow the government to take oil from the wells here until they protect the entire Rohmaria region from erosion. They save our villages, we allow them to exploit the oil deposits," says Mr Gogoi.

"We know India values our oil, it should learn to value our lives, our future."

Oil India officials say they have been "caught in the crossfire". 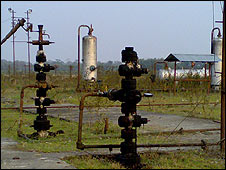 "The problem of erosion in Rohmaria is serious and the people are desperate. They tried persuasion with district officials, state government agencies and federal river authorities, but when nothing worked, they turned against our oilfields. That's unfortunate," says PK Dev Choudhury, Oil India spokesperson at company headquarters in Duliajan, not far from Rohmaria.

On 10 August 1999, Rohmaria villagers stopped production in the four wells (producing 650 barrels of crude a day) drilled by Oil India.

Keen to resume production, Oil India tried placating the villagers by designing erosion protection devices known as dampeners from scrap pipes which are capable of reducing the impact of erosion.

Thirty-four such dampeners were installed at Rohmaria and the villagers withdrew the oil blockade in January 2004.

For two years, all worked well. But as fresh areas of Rohmaria were hit by severe erosion, the villagers asked for the installation of more dampeners.

"We want Oil India to install at least 200 dampeners along the 9km (five miles) stretch from Rohmaria to the northern outskirts of Dibrugarh," says Mr Gogoi.

To back this demand, the villagers resumed their blockade in December 2005.

Several rounds of dialogue between the Dibrugarh district administration, Oil India officials and the Save Rohmaria committee failed to break the impasse.

The blockade was briefly lifted in September 2007, only to be resumed two months later.

"We are a responsible company which is corporately committed to the all-round development of locations around our operational areas. We want to help these hapless people, but it is beyond our means to undertake river protection and anti-erosion works of such magnitude," said PK Dev Choudhury. 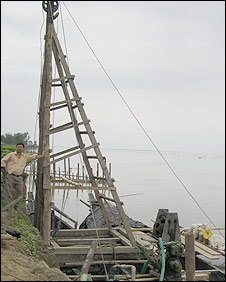 Meanwhile the Brahmaputra Board says it is undertaking a major project further upstream of the mighty river on the borders of the states of Arunachal Pradesh and Assam to alleviate the problem.

"That will help stop the acute river erosion in Rohmaria," a board official says.

But until river erosion actually stops at Rohmaria, the villagers say they will continue their tactic of not allowing Oil India to resume production.

"Once we did not have enough refineries to process our crude. Now we don't have enough crude to refine," says economist Jayanta Madhav Goswami.

It is a challenge for Prime Minister Singh, elected to parliament from Assam, to break the deadlock.

His government has pushed oil companies to increase output and has prioritised energy security to ensure the present rate of economic growth is maintained.

But in doing so, he may be causing irreparable damage to the state that contains his constituency.

Flood is always a problem in Assam and I hope in the due course of time few measures would be taken even if full control seems a far dream then reality.
You must log in or register to reply here.
Similar threads
Portuguese ship spills 10 KL oil 450 km off Chennai
US oil futures fell below $0 on Monday for the first time in history.
US becomes a major oil supplier to India
Pakistan: Exxon Is Close To Making A Mega Oil Discovery (larger than Kuwait)
Share:
Facebook Twitter Reddit WhatsApp Link