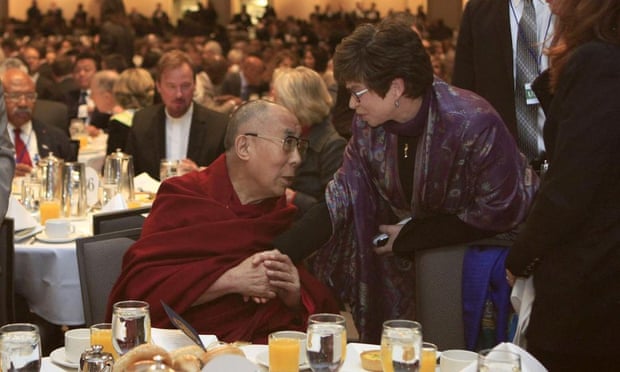 Valerie Jarrett, senior advisor to President Obama, talks to the Dalai Lama during the prayer breakfast.

Barack Obama hailed the Dalai Lama as a "good friend" during the two men's first public encounter, one that will likely enrage Beijing.

Speaking before an audience of 3,000 at the national prayer breakfast in Washington, Obama heaped praise on his fellow Nobel peace laureate, who is reviled by China as a separatist.

"I want to offer a special welcome to a good friend," the president said. He described the Dalai Lama as "a powerful example of what it means to practice compassion".

The praise was a brief moment in the president's 25-minute speech to the breakfast, one of the most prominent religious events of Washington's political calendar. He devoted much of his time to lecturing on the perils of spiritual certainty, calling for more humility among church leaders around the world.

Obama received polite, if somewhat muted, applause when his speech instead focused on how professions of faith were often "twisted in the name of evil" and used as as weapon.

Lest the audience think he was talking only about Islam, the president then stressed this problem was "not unique to one group of religion". "There is sinful tendency in [all of] us, that can distort our faith," he added. "Particularly in those of us who profess to believe."

And he called on religious followers and leaders to embrace more "humility and doubt" and not be "so full of yourself that you are right and God speaks only to you".

"We should assume humbly that we don't always know what we are doing," said Obama. "As people of faith we are summoned to push back at those who seek to distort religion for nihilistic ends."

The Dalai Lama was seated at a table in the front row across from the US president. Obama nodded and smiled at him, waving after clasping his hands together in a bow-like gesture toward the Buddhist monk as the event began. Organizers also recognized the spiritual leader, prompting applause.

Senior Obama adviser Valerie Jarrett was seated at the table with the Dalai Lama, a sign of White House support for his presence.

The exchange may still rile China, which bristles at politicians meeting with the Dalai Lama. After the breakfast event was announced, Beijing said it opposed any country meeting with him under any circumstances.

Obama has previously met with the spiritual leader three times, most recently in February 2014. Each of those encounters have been held behind closed doors to avoid risking relations with China.
Obama hails Dalai Lama as 'good friend' during US prayer breakfast | US news | The Guardian
Click to expand...

Obama has met the Dalai Lama earlier too, but has been very careful not to upset the Chinese over these meetings.

However, to openly show respect and affection in a public meeting, is a new one for Obama.

It will surely irk the Chinese since they will not take it kindly.

One wonders what prompted Obama to make a departure from the earlier style, during this meeting.

What has made him so hostile to the China to openly irritate them?
You must log in or register to reply here.
Similar threads
Sarkozy hails India's rise, echoes Obama on inclusion in UNSC
The Obamas unforgettable legacy
Obama sends special forces to Russian border
Obama signs into law bill declaring India a ‘major defence partner’
Share:
Facebook Twitter Reddit WhatsApp Link