WASHINGTON: Any residual doubt that Pakistan is a duplicitous terrorist state was set to rest by the time Pakistan Prime Minister Nawaz Sharif met US President Obama in the White House on Wednesday with leaked US intelligence reports that showed Islamabad acquiesced to Predator strikes on some terrorists targets even as the country's intelligence agencies shielded and helped others. The US president also implicitly accused Pakistan of exporting terrorism.

The disclosures relating to drone strikes from 2007 to 2011, when Gen Pervez Musharraf and Asif Ali Zardari were in power, did not stop Sharif from predetermined talking points during his two-hour meeting with the US president that included pleading for a stop to the attacks. "Pakistan and the United States have a strong ongoing counterterrorism cooperation. We have agreed to further strengthen this cooperation. I also brought up the issue of drones in our meeting, emphasizing the need for an end to such strikes,' Sharif said with a straight face, with US president next to him.

Obama, who had already spoken by then, ignored the drone issue altogether, but praised Sharif for his commitment in trying to reduce "incidents of terrorism inside of Pakistan's borders, and the degree to which these activities may be exported to other countries." Implicit in the remark was that Pakistan is a terrorism-exporting country, and the drone strikes were a legitimate US response in areas where Islamabad has no control and has ceded sovereignty.

The fact that Obama grilled Sharif over Islamabad's dodgy approach to terrorism, particularly in reference to India, was confirmed by the Pakistani prime minister himself. "He (Obama) asked, why the trial of the (Mumbai) terrorist attack in India has not started yet," Sharif told reporters soon after the meeting, adding, "He (Obama) has raised the issue of (Dr Shakil) Afridi. He spoke about cross-border movement. He also talked about Jamaat-ud-Dawa."

In public though, the US president was careful not to embarrass his guest too much. "We talked about security and the concerns that both of us have about senseless violence, terrorism and extremism. And we agreed that we need to continue to find constructive ways to partner together -- ways that respect Pakistan's sovereignty, that respect the concerns of both countries," Obama said in a nuanced explanation that provided the sub-text to the drones strike imbroglio.

The Obama administration was evidently compelled to leak intelligence reports of the back channel agreement on drone strikes with Pakistan after Sharif upped the ante ahead of his meeting with the US president in an address to the US Institute of Peace on Tuesday, saying the attacks infringed on Pakistani sovereignty, it is an irritant in bilateral ties, and he would raise it with Obama. US officials had tried to walk Sharif away from the subject by suggesting that such strikes were inevitable when Islamabad ceded sovereignty to terrorists and was even complicit in their activity, but faced with Sharif's intransigence, partly driven by domestic considerations, the administration leaked a trove of documents to the Washington Post that exposed Pakistan as a dishonest, two-faced country that helped terrorists it considered state assets.

The documents, the Post said, show that not only did US officials share information with Pakistan on drone strikes, but the two sides also clashed on occasions over Pakistani military-intelligence agencies being in cahoots with terrorists. These included time-stamped videos of terrorists dispersing material and themselves soon after being tipped off by an intelligence courier that a drone attack, about which US shared information with Pakistan, was imminent.

In one case, the report says, then US secretary of state Hillary Clinton cited "cell phones and written material from dead bodies that point all fingers" at a militant group based in Pakistan. "The US had intelligence proving ISI was involved with these groups," she is cited as saying. In another case, CIA deputy director Mike Morell is said to indicate that the CIA was prepared to share credit with Pakistanis for a drone strike if the agency could confirm that it had killed Ilyas Kashmiri, an al-Qaida operative suspected of ties to plots against India. The agency would do so "so that the negative views about Pakistan in the US decision and opinion making circles are mitigated."

Overall, the disclosures suggest that the United States is cognizant of Pakistan's sponsorship of terrorism, but instead of punishing the country, it will selectively leak information to walk it back from its self-destructive path. US President Obama's explicit reference to Pakistan exporting terrorism is the closest the US has come to publicly outing it as a terrorist entity.

But there is no indication though that Pakistan, dubbed Denialistan in some quarters, recognizes the gravity of the charges. In his USIP address, Sharif went so far as to assert that "Pakistan is neither source of nor epicenter of terrorism," even though his own political party, the Pakistan Muslim League, has well-chronicled links with terrorist groups such as Lashkar-e-Jhangvi. The government in Punjab led by his brother is reported to make budgetary allocations to the internationally banned terrorist group Lashkar-e-Taiba aka Jamaat ul-Dawa, even as Washington appropriates US tax-payer dollars as aid to Pakistan.

None of these complications or contradictions is reflected in the 2500-word joint statement issued at the conclusion of the Obama-Sharif meeting. The statement, along with an elaborate fact-sheet, manages the optics of the visit and suggests that all is -- or will be -- hunky-dory between the two sides as the U.S tries to manage the relationship ahead of its 2014 drawdown from Afghanistan.

who are the pakis trying to convince ? whole world knows pak is a terror factory...........already on the verge of a crisis

He wanted Uncle to mediate in kashmir and he end up getting grilled by Obama.

le in anger says: man once and for all .. lets attack on pak and grab our kashmir back ... give independence Balochistan .... this will clear the situation ...

but thinks about the statement he made for 10 mins and shouts ... NOOOOOOOOOO

if we attack pak ... china come to aid the pak ... then russian had to aid India .... us has no choice but will help pak as russia came for india and here starts the WWIII .... so wait for pak to make the first move then we will do our part
D

The body language says it all: 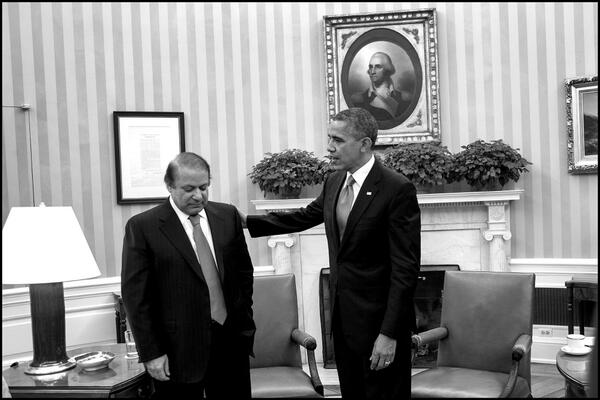 It's good if Americans realize that the attitude of treating Pakistan and India as 'equals' belongs in the long gone 50s-60s. 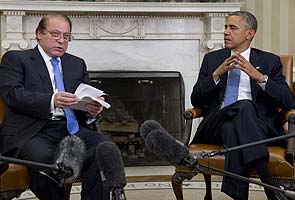 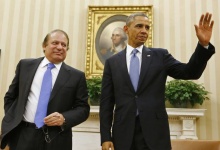 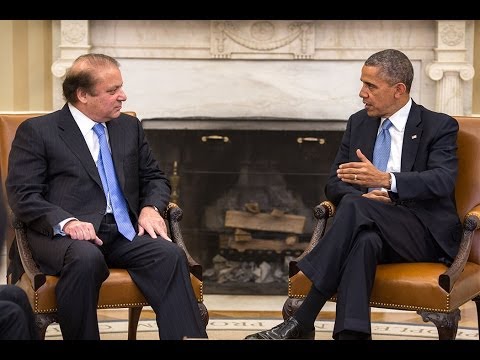 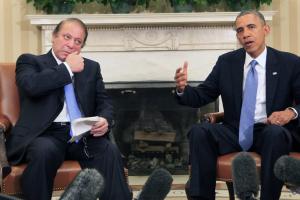 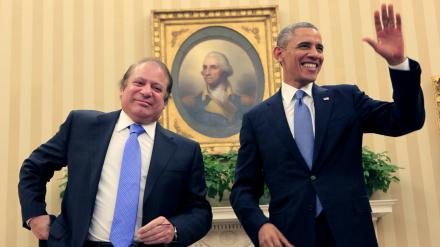 Seems he reading from paper pages taken from hotel room. Looks all a bit unprofessional yet with sudden preparation that zapped his energy (was he able to achieve what he want) - also is he trusted to open his mouth without explicit written preparation and dictation from others in foreign affairs. Even in PRC there was a video where he was talking while someone was whispering to him what to say. Looked a bit amateur for a three time pm.

Another way to look at this is he wants to respect the listener(s) and say thoughtful things out of respect. (Side note I don't know why but somehow nawaz gives a feeling he is good guy deep down - it is a pure subjective feeling at this point of time but I don't know why it's there. He got shafted and humiliated by musharraf yet he returned to be pm the right way. This subjective feeling on him wants to see him progress more peace and good moves with india (with us giving them a few bloody nose on border) as well as awaiting his next moves on musharraf and selection of army chief).

Returning to point - What did he say eventually with Obama and what did Obama say in the above pics.

Anyone seen the USA and paki joint declaration any comments.