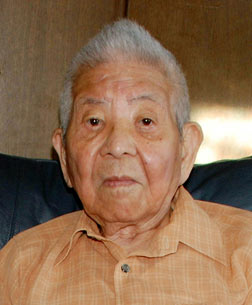 Tsutomu Yamaguchi
Last week brought us news of the death, at the very ripe and distinguished age of 93, of Tsutomu Yamaguchi. I had been following his career, if only from a distance, for some time. On Aug. 6, 1945, while visiting the city of Hiroshima on behalf of his employer, Mitsubishi Heavy Industries, Yamaguchi sustained serious upper-body burns when a U.S. Air Force B-29 bomber rather jauntily named the Enola Gay dropped the world's first atomic weapon. At least 80,000 people were immediately immolated by the blast and the heat, with perhaps another 60,000 dying of their injuries in the aftermath. Yamaguchi managed to pass the first night in a shelter and then, evidently hoping for a safer and more hospitable environment, to make his painful way back to his hometown. Covering the intervening distance of 180 miles involved him in a journey of about two days, which gave him nice time to adopt an unusual vantage point for the next delivery of an atomic weapon on Nagasaki.

When hit in the throat by a Spanish fascist bullet that managed to bypass his spinal cord, his larynx, and his carotid artery, George Orwell grew tired of those who visited him in the hospital and congratulated him on how lucky he had been. If he was such a favorite of fortune, he ended up growling, then perhaps he would not have been shot in the neck in the first place. The scale of Yamaguchi's experience was admittedly rather more impressive, but it does still compel the question: Was he the unluckiest man of the 20th century or the luckiest?

Well, he was fortunate in one way, in that his gruesome employer, a subsidiary of the criminal Japanese military-industrial complex, could have made him a legitimate target at any time. He was less fortunate in having to campaign for years for the Japanese government to recognize his status as a dual survivor of the Hiroshima-Nagasaki attacks. He was fortunate in being employed after the war as a translator for the U.S. forces but tragically unfortunate in outliving his son, who was 6 months old at the time of the Nagasaki bomb and who died in 2005 from cancer that may well have been radiation-related. On the other hand, you might argue that it was a kindly fate that prevented Yamaguchi from having taken his wife and baby boy on that business trip to Hiroshima.

This is also one of those cases that demonstrate the absolute uselessness of official piety. A Christian or Muslim would more or less have to say, not least because of the apocalyptic events that seemed to dog Tsutomu Yamaguchi wherever he went, that he was in God's hands. But this seems a bit callous in respect of the hundreds of thousands of other casualties (not to say somewhat hard on Yamaguchi's own son). But mention of that son reminds us that Japanese and other forms of Buddhism—very much present as part of Emperor Hirohito's imperial and military ideology (see Brian Daizen Victoria's eye-opening book Zen at War)—would have coldly attributed all the deaths to actions unknowingly committed in the course of previous lives. I am not so sure that I can guess what an Orthodox Jewish rationalization would be, except that it would take numerous contradictory forms.

If you think I am being frivolous, ask yourself whether you can picture any religious person explaining Yamaguchi's experience as what it actually was: a mere coincidence that makes nonsense of any idea of any design or predestination. (Either that or something divinely mysterious and inexplicable, which is the same thing as saying that holy men are using guesswork as much as the rest of us.) One hundred sixty-five other people are believed to have survived both of the atomic detonations that were visited on Japan, while only Yamaguchi managed to achieve official recognition as such. This seems to say more about Japanese bureaucracy than it does about the laws of time and chance.

Then you have to factor in all those people who consider that this ghastly end to World War II was the reason why they themselves survived it. The emperor's soldiers were still butchering Filipinos, Indonesians, and Vietnamese, and maltreating enslaved Allied prisoners of war, until the very moment, a few days after Nagasaki, when they were ordered by their god-king to hold it right there. So it might as well be asked: In what plan does heaven ordain the fiery destruction of two cities in order to economize on the loss of life elsewhere? It is reported that in his declining days last month, Yamaguchi was visited in the hospital by the celebrated movie director James Cameron; a still small voice advises me that any script arising from this encounter is liable to stink very strongly indeed.

The brute fact must also be faced that there is something approximately 30 percent farcical, even funny, about the whole tale. There's almost no point in not laughing about it. The late Alan Clark, Tory historian and amoral wit, once drew up a list of the occasions on which it is permissible to employ the word **** in polite society. One of his examples was, "What the **** was that?" as uttered by the mayor of Hiroshima. Add to this the mayor of Nagasaki exclaiming the same thing just as Yamaguchi stumbles onstage, and you can arguably build a bit of a routine around it. Unfeeling, you say? Not particularly. It isn't my idea that these capricious catastrophes strike the just and the unjust with such regularity, or that they are soothingly explained away by the pseudo-compassionate. Of all the great cosmic questions, WTF still strikes me as one of the most pressing, relevant, and ultimately humane.