NPT noose slips around India's neck with US resolution

NPT noose slips around India's neck with US resolution

New Delhi: In line with its stated agenda the United States has floated a draft resolution at the United Nations Security Council (UNSC) asking non-NPT countries, such as India, Israel and Pakistan, to sign the Nuclear non-Proliferation Treaty. It also asks signatories to comply with their obligations as mandated by the treaty.
Though aimed primarily at 'rogue' elements, such as North Korea and Iran, India is likely to find the going tough as nuclear non-proliferation is a stated objective of the Obama administration. 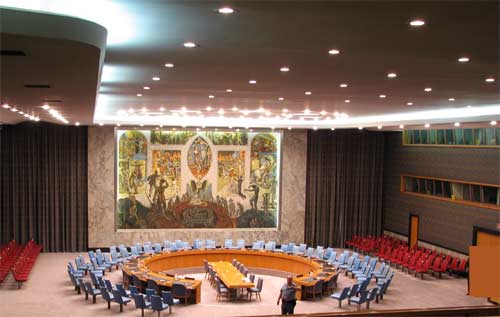 It also urges all countries ''to pursue negotiations in good faith on effective measures relating to nuclear arms reduction and disarmament and on a treaty on general and complete disarmament under strict and effective international control''.
The recent controversy over nuclear testing in India will find a resonance here with the American resolution also including a reference to the Comprehensive Test Ban Treaty (CTBT). It asks all countries to ''refrain from conducting a nuclear test explosion and to join the Comprehensive Test Ban Treaty, thereby bringing the treaty into force''.
Though this is not the first time that the UNSC would be mulling over such a resolution, for after the nuclear tests in 1998, the Council did vote on and pass Resolution 1172 asking India and Pakistan to sign the NPT as well as the CTBT.
It comes at a particularly vulnerable moment for India, keen as it is to capitalise on the momentum provided to it by the successful resolution of the Indo-US Civilian Nuclear Agreement last year which now allows it to step out of the nuclear doghouse where it had been confined for the last so many decades, and jettisoning long-standing positions on nuclear issues, which for it have been an article of faith.

domain-b.com : NPT noose slips around India's neck with US resolution

Obama will screw up everything that has been going on between India and the US for the last eight years.
He has to realize that India will not join NPT under its current format. Yes if its included in the list of members "allowed" to have nukes. Pakistan will not join if India doesnt and it will demand the same status as India if India is included as a "have nukes" member of the NPT. Israel will never join.

So the choice Obama has is to include India in the list of nuke haves which will pave way for India to have unrestricted access to nuke tech and also opens up the door for it to conduct more tests to verify all data and also the recent doubts that have been created and then sign the CTBT.

If Obama cant get that done, then he can forget about India signing both the treaties and the stalemate continues. Its time the US and the world recognize India as a nuke power and move on. Bush was more pragmatic. Obama seems to be idiotic in this regard.
You must log in or register to reply here.
Similar threads
The Treaty on the Prohibition of Nuclear Weapons (TPNW)
China contradicts NPT consensus by supplying nuclear reactors to Pakistan
India counters China, says no need to sign NPT for NSG membership
India has "murdered" the NPT
Share:
Facebook Twitter Reddit WhatsApp Link