UN experts believe North Korea has at least one hidden nuclear site, according to leaks of a UN report.

The report relies on evidence from US scientist Siegfried Hecker who visited a secret site in November last year.

He told the UN's panel of experts that the centrifuges he saw probably came from other hidden facilities, say reports quoting unnamed diplomats. 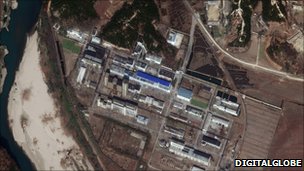 
The panel's report, which has not yet been published, was handed to the Security Council last week.

The UN's panel of experts, which assesses the sanctions regime against Pyongyang, was asked to produce the report after Mr Hecker briefed the Security Council on his visit.

Diplomats told Bloomberg that their report concluded that centrifuges and other equipment at the Yongbyon reactor had previously operated at one or more secret locations.

Another diplomat told Reuters: "There's no way they could have outfitted the centrifuge facility between 2009 and now without there being additional secret sites."

According to the diplomats - who were not identified because the report has not yet been published - Mr Hecker told the panel it was unlikely that the North could have manufactured all of the equipment.

He said it was more likely that they had imported some materials and assembled them in at least one secret location, before moving them to Yongbyon.

The panel's report recommends tightening sanctions to include asset freezes and travel bans on nuclear officials, according to leaks from diplomats.

The report is expected to be made public later in the week.

Last December, US officials also expressed concern that the North could have more secret facilities, after a briefing by Mr Hecker.
You must log in or register to reply here.
Similar threads
North Korea Says It Has Conducted 'Successful' Hydrogen Bomb Test
North Korea claims it has hydrogen bomb
North Korea 'has boosted special forces'
Time for India to step up its ties with North Korea
Share:
Facebook Twitter Reddit WhatsApp Link