No space for Gujarat's lions at Gir

No space for Gujarat's lions at Gir 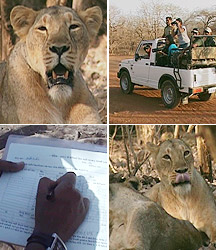 While the rest of India is fighting to save the tiger, the Gujarat government is expected to announce an increase in its lion population at the Gir National Park. While conservationists say that this is a good sign of the park's health, they are worried that Asia's only lions could however, be in danger of being wiped out.

Nearly 2,000 personnel are busy trying to trace and record each lion as part of the 13th census at the Gir National Park in Gujarat.

For the first time technology is being used in a big way as a hundred young specialists like Shamshad Alam will log the position of each lion using the Global Positioning System or GPS. They will also take pictures to ensure no animal is counted twice.

Gir is the last bastion of Asiatic lions and according to the 2005 census according to which it had 359 lions. That number has been increasing at an annual rate of 5 per cent.

While many see this as a sign that Gir has a viable habitat others are worried that it may lead to over-crowding.

The lions of Gir have started venturing out, so far there have not been many conflicts with human beings but the question is whether it is only a matter of time.

R V Asari, Principal Chief Conservator of Forests, Gujarat, says, "Well many of our lions have also moved to other buffers some almost 100 kilometers away."

Scientists are worried that Gir's lions may be prone to inbreeding and their numbers could drastically be reduced if disease were to strike.

The central government is keen on relocating some of the lions in the Kuno sanctuary in neighbouring Madhya Pradesh.

Mudrika Singh of the Balaghat Forest Training college, says, "Well we have prepared the area and are now waiting for the lions."

Gujarat has so far refused to part with its lions the big question then is: Is pride and Gir's success now a looming threat for the king of the jungle?