New Delhi, July 26: Imran Khan is at a touching distance and is set to become the Prime Minister of Pakistan. A man who started off on a positive note, over the years has earned the nickname Taliban Khan.

Imran Khan Khan made a strategic shift in his approach over the years, by speaking the language of religious extremists and very often terrorists. He had come under severe criticism when he referred to Wali-ur-Rehman as 'pro peace,' after he was killed in 2013 in a drone strike. He had tweeted, "The drone attack that killed pro peace Waliurrehman led to r (sic) soldiers being killed/injured in revenge attacks! This is totally unacceptable." Short News Indian student killed in Australia while meeting online date Muzaffarpur Shelter Home case: Nitish Kumar orders to handover case to CBI Vikarm Batra- Hero of Operation Vijay Another time when he was criticised when he had suggested the opening of an office for the Taliban in Pakistan. If the US could open an office for the Afghan Taliban in Qatar, then why can't there be one in Pakistan, he had said. In 2014, he had termed the killing of Taliban leader, Hakimullah Mehsud in a drone strike as deliberate. It was a deliberate targeting of the peace process, he had said then. He was further scrutinised after his party gave a donation of PKF 550 million to a madrasa of Sami-ul-Haq, who is known as the Father of the Taliban.

nothing has changed in pakistan, last time army supported Nawaz sharif and this time Imran khan.

It is the army and isi which call the shots anyway.

Khan’s utterances over the years have not painted a picture of someone who wishes to disassociate from the Pakistan Taliban.
File image of Imran Khan. (Photo: Reuters)

New Delhi: Pakistan Tehreek-e-Insaf (PTI) chairperson Imran Khan, who is being touted by many as the next Prime Minister of that country, has gained international repute as a cricket legend.

However, over the past five years, he has cultivated another image — one which is not so flattering. His political opponents in Pakistan have dubbed the 1992 Cricket World Cup winner ‘Taliban Khan’. While he has fought this image, Khan’s utterances over the years have not painted a picture of someone who wishes to disassociate from the Pakistan Taliban.

Khan courted controversy for describing top Tehreek-e-Taliban Pakistan (TTP) commander Wali-ur-Rehman as ‘pro-peace’ when he was killed by US forces in 2013. “The drone attack that killed pro peace Waliurrehman led to r soldiers being killed/injured in revenge attacks! This is totally unacceptable,” he tweeted.

Later that year in September, Khan suggested that the Taliban should be allowed to “open an office” somewhere in Pakistan. He argued that if the US could open offices for the Afghan Taliban in Qatar, why couldn’t the Pakistan Taliban do the same?

In March 2014, senior PTI leader and health minister in Khyber Pakhtunkhwa Shaukat Yousafzai said PTI had “always supported the opening of a Taliban office in Peshawar”. Later, yet another minister in the PTI-ruled KPK Province said the Taliban should be allowed to open an office “anywhere in Pakistan”.

In November 2013, after the US killed Taliban leader Hakimullah Mehsud in a drone strike, Khan said it was “absolutely deliberate — this was a deliberate targeting of the peace process”.

The cricketer-turned-politician’s love for the Taliban is not one-sided. In February 2014, the terror outfit nominated him to represent them in mediation talks. While Khan eventually refused, the incident showed the faith the Taliban has in him.

In March that year, Khan said the Pakistan Taliban’s only demand was that it wanted to disassociate the country from the US’s war, which is something even PTI has been demanding.

Khan’s utterances in support of the Taliban continued well into 2018 as he defended the group’s system of justice in an interview to BBC HARDtalk. Pakistan People’s Party chairperson Bilawal Bhutto Zardari had lashed out at Khan after his comments.

In January this year, the PTI gave a grant worth PKR 550 million to madrasas of Sami-ul-Haq, who is also known as the ‘Father of Taliban’. Ahead of the polls, PTI joined hands with Maulana Fazlur Rehman Khalil, who is on the US terror watch list.

While Khan has claimed repeatedly that his criticism has been fuelled by “Indian and American propaganda”, he will have to answer some tough questions in front of the world.
Click to expand...

As long as idiots rule Pak, everything will be good for us.

Chatrapathi said:
Of-course but porkis always claim only 'non-state actors' support talibans, we are also victim of taliban/islamic terrorism,we are pisful and what not but now their PM himself OPENLY SUPPORT Talibans.

Toronto, July 26: Tarek Fatah, a Canadian author of Pakistani origin, has questioned the "fairness" with which the elections were conducted in Pakistan and called Imran Khan, whose party PTI is set to emerge as the single largest party, as "fair and lovely military pappu". Canadian author of Pakistani origin Tarek Fatah Fatah is staunch critic of Pakistani politics and minces no words when it comes to Pakistan bashing. Fateh's opinions are criticised in Pakistan. He was, in fact, chased out of Pakistan for his outspokenness, views on the way the nation was being run and for questioning the basis on which the Islamic republic was formed. Fatah has now settled down in Canada and authored many books on the rise of Islamic Extremism and the threat it poses to the world.


India has been watching Pakistan elections with bated breath as Khan has very often in the recent past been accused of being a puppet of the Pakistan army. Imran Khan has denied these allegations, but history would show how close he is to the army in Pakistan. His affair with the Pakistan army has been a long-standing one and documented as well.

Observers in India had always maintained that it was clear from the start that Imran Khan would win the elections in Pakistan. The army had backed him to the hilt, all along.

Imran Khan-led Pakistan Tehreek-e-Insaf inched closer to becoming the single largest party in the country's general elections by leading on 119 seats in an early count of votes, amid charges of rigging by rival political parties. PTI was ahead in 119 of 272 contested National Assembly constituencies, while its main rival Pakistan Muslim League-Nawaz (PML-N) was way behind with 65 seats. The Pakistan People's Party was leading on 44 seats while others were ahead in 17 seats.

exactly, he will be seen as a taliban supporter for sure. Apart from this he is acting like a fundamentalist off late.

Srinivas_K said:
exactly, he will be seen as a taliban supporter for sure. Apart from this he is acting like a fundamentalist off late.
Click to expand...

Every inbred paki who is a product of [email protected] is the same. Filthiest vermin on this planet. Ach thoo.
Last edited: Jul 26, 2018

Lolz. Immy thanks Army in his first address.
So much for democracy.

It would be fun for next couple of years, tracking New paki PM.

Looks like he realised very early on that if he tries to solve “Kashmir issue”, he will be out of power. 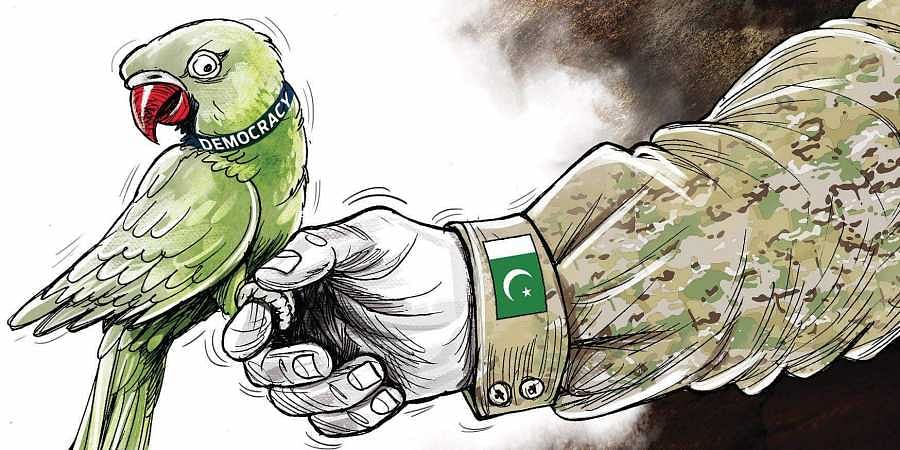 The Murder Of Democracy in Pakistan
S

Dont know why our media is demeaning Imrankhan. Why they r trying to portray Nawaz sharif as some kind of Peace angel?. As for India,nothing going to change. Pakis might get better governance from Imrankhan. PTI did a decent job in kpk.once upon a time, there were bomb blasts in every other day in Peshawar. But i think PTI government improved law and order in kpk via police reforms
S

I think this election in Pakistan is similar to 2014 indian parliamentary elections. Corrupt Congress- corrupt PMLN

Careful @Samsung J7 your Pakistaniyat is peeking out.

Slowing down of Terrorism is not because of PTI, but military op which destroyed most of northern areas. It doesn't matter who ever is prime minister but military pulls the strings from behind. No paki could be friendly with Bharat be it Bhutto, Sarif or Khan. Khan is also known as UTurn Khan.


Samsung J7 said:
Dont know why our media is demeaning Imrankhan. Why they r trying to portray Nawaz sharif as some kind of Peace angel?. As for India,nothing going to change. Pakis might get better governance from Imrankhan. PTI did a decent job in kpk.once upon a time, there were bomb blasts in every other day in Peshawar. But i think PTI government improved law and order in kpk via police reforms
Click to expand...

Can't compare, people surrounding Khan are no different that of Congis.

mayfair said:
Careful @Samsung J7 your Pakistaniyat is peeking out.
Click to expand...

I am from deep south. I hav nothing to do with Pakistan.
S

Imran khan is Kejriwal of Pakistan. The fact is the opposition has got even stronger. It's good for India. You will get more chances to expose Pakistan. And what do you think? The opposition will leave him just like that? Just wait and watch what happens there. They are on the way to turmoil now.

I think his first foreign visits will be Afghanistan, China / Saudi and UK. In that order.

No point in giving certificates right away, fair assessment can be made only after about an year of governance. Let’s just hope he doesn’t do anything stupid about Kashmir in between.

Did he mention Iran in his speech? He also didn’t mention Bangladesh...

my suggestion would not to keep hope high with new gov. It is like committing same mistake over and over again, and expecting different result. Same mistake was committed by Vajpayee and modi, they got Kargil and Uri in return before even they step back in Bharat from Terroristan.

Even if we take what ever he talk by its face value. Then history definitely states otherwise. When B. Bhutto wanted better relation with Bharat she was declared security risk. When M. Sarif wanted the same he was thrown out of Terroristan. And Khan will be the same.


So the france24 calls him playboy

or they meant sportsman

Shukla G Has made it easier for me...

Indian analysts dismiss @ImranKhanPTI as anti-India. In fact, he's besotted with India. He's the Pak Army's candidate, sure. But Pak Army chief, General Qamar Bajwa, wants to cool tempers with India. Say what you will, analysts, but I say Imran's win is good for India-Pak ties.