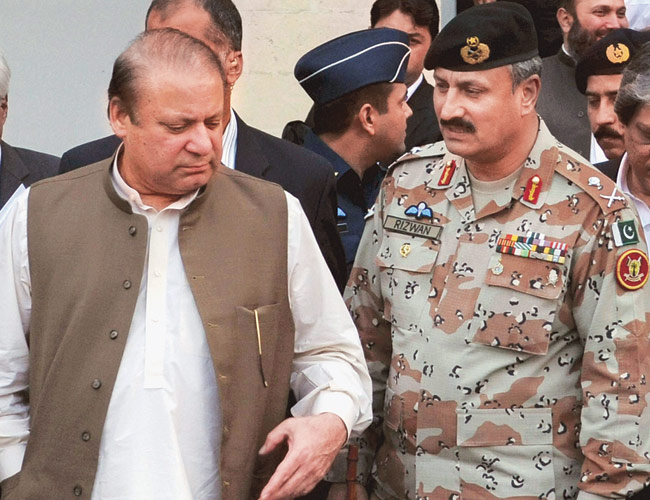 Lieutenant General Rizwan Akhtar, the next chief of the Inter-Services Intelligence (ISI), will play a key role in shaping policies for a spy agency that is traditionally perceived as anti-India, but there was a time six years ago when he was of the opinion that Pakistan "must aggressively pursue rapprochement" with India.

Akhtar, considered a close ally of Pakistan Army chief General Raheel Sharif, was on Monday appointed to the crucial post, though he will take over in October after the retirement of incumbent ISI chief Lt Gen. Zahir-ul-Islam. He has considerable experience in countering insurgency and the Taliban from a posting in the troubled South Waziristan region bordering Afghanistan.

While he was at the US Army War College in Pennsylvania as a brigadier in 2008, Akhtar authored a strategy research project report titled 'US-Pakistan trust deficit and the war on terror', in which he advocated the need to improve relations between New Delhi and Islamabad.

"Pakistan needs to enhance its credibility by publicly identifying some of its critical strategic challenges. It must reform its governance, improve the economy, confront and eliminate Islamic extremism, and create a more tolerant society. Most important, it must aggressively pursue rapprochement with India," he wrote in the 30-page report posted on the US Army War College's website.

Akhtar, who played a key role in counterterror operations while heading the paramilitary Pakistan Rangers in the troubled southern port city of Karachi and other parts of Sindh province, further contended that the US could play a greater role in resolving the dragging Kashmir dispute. Such a step could even improve ties between Pakistan and the US, he argued.

"...The threat posed by India has served as a primary enabler for US-Pakistani relations as US involvement and support can help mediate and ensure an equitable settlement of the Kashmir issue as well as help represent Pakistani interests within the United Nations," he wrote.

"More deliberate and energetic efforts by the US with both India and Pakistan to resolve the Kashmir issue and lay the groundwork for Indian-Pakistani rapprochement would dramatically improve the US-Pakistani relationship," he added.

Akhtar posited that the resolution of the Kashmir issue and "securing a lasting peace with India is vital to the stability of Pakistan and the region". He argued this could free up "significant Pakistani military forces for potential employment in other troubled areas for operations against the Taliban/Al Qaeda".

The report, written months before the 2008 Mumbai attacks that Indian security officials have said was planned by the ISI, further said several recent confidence building measures had eased India-Pakistan tensions to a "level that makes another war unlikely".

"The US's proactive mediation has helped diffuse (sic) the Kargil incident and the subsequent 2001/ 2002 mobilization of both countries that resulted in forces juxtaposed across the border on the verge of war. Pakistan, however, is concerned about the recent US-Indian nuclear agreement, and also aspires for one itself," he wrote. Akhtar also argued that "US-Indian activities have a profound affect (sic) on the Pakistani populace and Pakistan's perceived security" which can disrupt or derail US-Pakistani relationship".

The appointment of Akhtar and the promotion of several generals on Monday bears the stamp of Army chief Gen. Sharif, who would probably have reassured Prime Minister Nawaz Sharif that the new ISI chief would not meddle in domestic politics, said Rana Banerji, a former Special Secretary of R&AW and a leading Pakistan analyst.

"But as far as India is concerned, we needn't be complacent. The ISI has kept the Lashkar-e-Taiba on a leash while continuing its other operations, like creating sleeper cells of the Indian Mujahideen and low-level infiltration in Kashmir," Banerji told Mail Today.

"The Pakistan Army has been pre-occupied with the Western frontier but once that is sorted out, they could ratchet up things with India if they feel the need. The ISI's institutional mechanisms remain in place and the giving up of the card of non-state actors hasn't happened," he said.

So, Pakistan comes under a new dispensation.

Let us wait and see the dirty tricks increase or decrease.

The last ISI Chief was a veritable crook who soured relations with India and was at loggerheads with Nawaz, who was technically the head of Pakistan.
R

Read the true account of the activities of ISI and its role in spreading terrorism across the globe. This book will tell you on how terrorism shifted from West Asia to South and Southeast Asia and Africa, it will reveal that the so called Islamic Terrorism is traceable to Pakistan from concept to reality.

"Inside ISI: The Story and Involvement of the ISI in Afghan Jihad, Taliban, Al-Qaeda, 9/11, Osama Bin Laden, 26/11 and the Future of Al-Qaeda" by S K Datta, EX Cbi Chief. The book is available at Amazon India and Flipkart in Print and eBook format. A must read for everyone.
You must log in or register to reply here.
Similar threads
ISIS chief baghdadi killed?
DG ISI changed Lt General Naveed Mukhtar can be the new ISI chief
ISIS chief Abu Bakr al-Baghdadi poisoned during a lunch feast: Media reports
Ex ISI Chief Assad Durrani on Pak-Afghan Relations
Share:
Facebook Twitter Reddit WhatsApp Link