The Government has approved the establishment of 54 temperature controlled Integrated Border Out Posts (BOPs) for Indo Tibetan Border Police (ITBP).

The Government is committed to the development of border infrastructure to strengthen the operational capabilities of ITBP. It has accorded in-principal approval to the setting up of 47 new BOPs for ITBP

This was stated by the Minister of State for Home Affairs, Shri Kiren Rijiju in a written reply to question in the Rajya Sabha today.

ndo-Tibetan Border Police (ITBP) jawans during a drill at the Nelong Border Outpost in Uttarkashi district of Uttarakhand on the New Year 2018. Home Minister Rajnath Singh paid a visit to this border post, located at a height of 11,614 feet in Uttarakhand, and interacted with the ITBP troops during new year celebrations. Under a special project of the Centre all the border posts along the Sino-India frontier are connected with outposts with roads, to save the jawans from long and strenuous marches and enhance the operational efficiency of the personnel.

http://www.hindustantimes.com/india...order-areas/story-DDI8NtE5qrEbatjkULyY4J.html
The move comes after home minister Rajnath Singh’s advise that border population living along the Sino-India border are the country’s “strategic assets”.

The paramilitary force has also decided to almost double, to a dozen in a year, the number of such regular educational tours for the children living in border areas.

Both the steps have been undertaken for the first time in decades and are understood to be done in the backdrop of India’s strategy to enhance security on its borders.

Official sources said the new policy to take elderly citizens on excursion tours to mainland India, including the national capital Delhi, was made after Singh recently told the force that they should always keep in mind that the border population living along the Sino-India border were the country’s “strategic assets”.

Addressing the Indo-Tibetan Border Police (ITBP) troops at their camp in Uttarakhand’s Joshimath in September after a forward area tour, Singh had directed the frontier guarding force to ensure that this population is taken care of as their migration would put India’s security at risk.

As per a blueprint prepared by the force and accessed by PTI, it is “proposed for the first time that apart from schoolchildren, elderly inhabitants including senior citizens of the border population will also be the part of future excursion tours by the force.”

The force has also decided to earmark fresh funds from its Civic Action Programme (CAP) budget to ensure airline tickets for these guests of the force. The CAP funds are given by the home ministry to the forces to undertake outreach initiatives for locals in their area of deployment.

Funds for air tickets were required, officials sources said, as many border villages are located in remote locations and journey by air will cut down the overall travel time.

“With such initiatives, the force has been eyeing to organise more programmes to win hearts and minds of the remote population and to provide them an opportunity to experience the rich social, cultural and historical heritage of the nation,” the blueprint said.

“Till now, the ITBP and other border guarding forces were only undertaking such tours for children living in border areas to educate them about their vast country which they probably could not see themselves due to their remote location or meagre resources.

“The MHA (Ministry of Home Affairs) recently allowed the new proposal for the ITBP to take senior citizens for such tours where travel, boarding and all logistics are taken care by the force,” a senior home ministry official explained.

The first such tour of senior citizens, probably from forward areas of Arunachal Pradesh, is expected in the next a few months and the contingent is expected to travel to religious and iconic places of the country and culminate in Delhi before winding up.

“People living along the India-China border should not be made to migrate at any cost. They are our strategic assets. They should be given more importance. The day they will migrate...that will not be good for our border security,” the home minister had said.

He told the troops, during his address, that the border population held an important place in the hearts of the government, led by Prime Minister Narendra Modi.

“The prime minister has said special attention should be given to the well-being of the people living on the borders. I will request ITBP (personnel) to make friends with the local population in the area of their border deployment,” he had said.

Border guarding forces on India’s eastern flank, like the ITBP, the Sashastra Seema Bal (SSB) and the Army have said they were taking steps to ensure tranquillity on the borders after the more-than-two-months-long Dokalam standoff between Indian and Chinese personnel ended in August last year.

The government is planning to raise 15 new battalions in the country's two important border guarding forces -- the BSF and the ITBP -- to fortify defence along the strategic frontiers with Pakistan, Bangladesh and China.

A senior official in the Union Home Ministry said that it is "actively considering" raising six fresh battalions in the Border Security Force (BSF) and nine in the Indo- Tibetan Border Police (ITBP) force.


Each battalion of these forces comprises about 1,000 operational jawans and officers.

Sources in the BSF said the force has projected enhancing manpower by sanctioning of new units so that they can be deployed in the Assam and West Bengal flanks of the Indo- Bangladesh border even as a similar addition in numbers is required to effectively guard the Indo-Pak International Border (IB), especially in Punjab and Jammu regions, in the near future.

"The exact locations for the new battalions could be gauged as and when they are raised but a few areas along Bangladesh and Pakistan will remain a priority owing to their vulnerability profile such as infiltration, drugs smuggling, human trafficking and illegal migration," a senior BSF officer said.

Similarly, the ITBP has been trying to reduce the inter- BoP (border out post) distance at the 3,488-km long icy frontier that it is tasked with guarding.

"The original projection was to have 12 fresh battalions for the ITBP but the force requires nine such units in the near future," a senior ITBP officer said.

The frequent instances of transgressions and confrontations with the Chinese army at the Line of Actual Control (LAC) is being seen as the major reason for the ITBP to enhance its numbers. 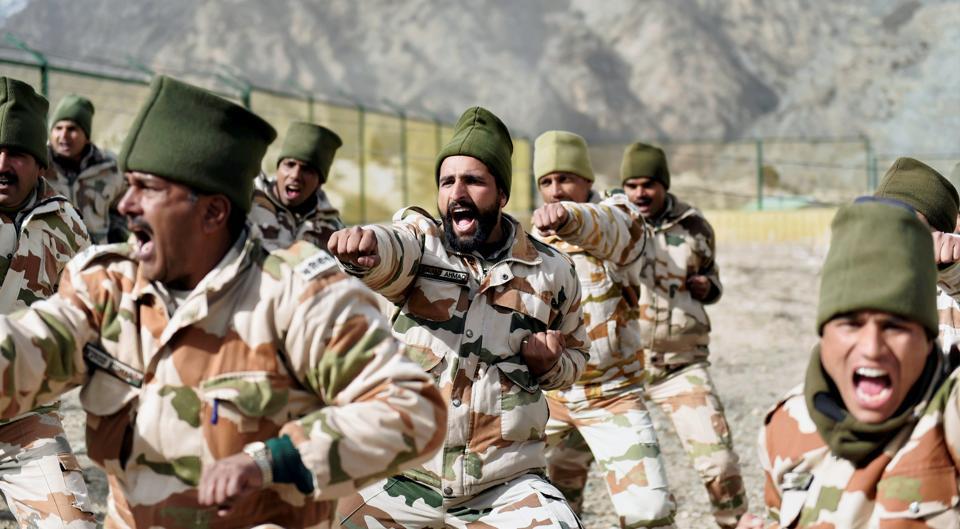 Indo-Tibetan Border Police jawans during a drill at the Nelong Border Outpost in Uttarkashi district of Uttarakhand. ITBP is the only one among the paramilitary and border guarding forces that will have a tableau in the Republic Day parade.(PTI)


Twenty years after its tableau rolled down the Rajpath, the ITBP will return with its float in the Republic Day parade showing troops patrolling the China border on their newly-inducted snow scooters.

The Indo-Tibetan Border Police (ITBP) is the only one among the multiple paramilitary and border guarding forces that will have a tableau in the parade.

Armed troops riding snow scooters, provided by the government to the ITBP last year as part of modernising the force, troops patrolling on foot and snow bunkers of the ITBP personnel deployed in the icy heights of the frontier have been showcased on the float.

It will also be accompanied by a small marching contingent of personnel wearing winter clothing. The personnel will also be shown negotiating dangerous hilly crevasses and treacherous ice slopes.

The float will roll down the Rajpath with the tune of the force song Hum Sarhad Ke Senani, in the vocals of singer Sonu Nigam.

The last time the tableau of the ITBP featured in the parade was in 1998.

That float was about mountaineering and adventure sports only but this time the ITBP tableau will showcase arms, equipments and regular duties rendered by the force in safeguarding the border which has seen a number of standoffs between the Indian and Chinese forces recently.

“The hard life of the ITBP jawans is also depicted through the tableau,” a senior official said.

The mountain-warfare trained force has conducted a record 208 mountaineering expeditions over the years as part of its skill training.

The ITBP, under the command of the Union home ministry, is deployed from the Karakarom Pass in Jammu and Kashmir to Jechap La in Arunachal Pradesh to guard the 3,488-km long Line of Actual Control (LAC) across five states. Its border posts are located at altitudes ranging from 3,000-19,000 feet.
You must log in or register to reply here.
Similar threads
Armed groups clash at key Libya border post
India to fortify defence along China border, 54 new ITBP posts
Govt to go in for 54 new ITBP border posts in Arunachal
Paki army target BSF posts at 25 locations on International Border
Share:
Facebook Twitter Reddit WhatsApp Link