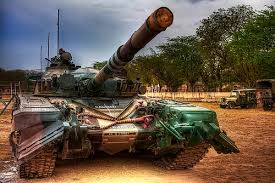 Nepal’s army has revived a five-year-old request for supply of tanks in the run-up to this week’s visit by its chief, General Chhattraman Singh Gurung.Requests have also been made for artillery guns, Insas rifles, ammunition, troop carriers, bullet-proof jackets and sighting equipment.
India has been supplying “non-lethal” equipment to Nepal, but now has to take a call on whether to resume gifting firearms.

A defence ministry source said Nepal had asked for 100 tanks in two phases at concessional rates.The source said enquiries were made about Ajeya (T-72), the tanks of Russian origin. The Ajeya is the main tank of the Indian Army but is being replaced by the modern Bhishma (T-90), also of Russian origin.
Nepal’s fresh request underlines just how much the threat perceptions of the country’s army have started to mirror those in the last days of the monarchy in 2005-06.New Delhi cannot afford to take Nepal’s requests lightly: when it turned down similar requests from Sri Lanka as the island nation was going to war with the LTTE, Colombo was forced to source military equipment from China and Pakistan.
With a 1,700km open border with Nepal, India will be circumspect about increasing Chinese influence in that country.In its earlier avatar as the Royal Nepal Army, the erstwhile kingdom’s military was almost wholly dependent on India for training and supplies. These were suspended in 2005.
Army chief Gurung will be in India for a week starting Friday. He has a series of high-profile engagements lined up, including one where he will accept from President Pratibha Patil the title of “Honorary Chief of Army Staff” of India on December 14.Gurung is being granted the kind of access that was reserved for Nepal’s army chiefs in the best days of the military relations between the two nations.
The relations were strained by the accession of King Gyanendra in 2005, the establishment of a republic and the possibility of Maoist cadres being inducted into Nepal’s army.
On December 14, the day he is conferred the title, Gurung will also attend a presentation in the office of the Indian army chief, General Deepak Kapoor, on “Indian Security Perspectives”.

Nepal Seeks Weapons From India​
After a hiatus of five years, India and Nepal have revived their defence ties and will shortly initiate various projects involving procurement of defence and military equipment.

The visiting Chief of the Nepal Army, General Chhattraman Singh Gurung, has made inquiries regarding supply of tanks as well as artillery guns, INSAS rifles, ammunition, troop carriers, bullet-proof jackets and sighting equipment from India.

During the recent three-day joint-secretary level meeting in Nepal, India has agreed in principle to resume non-lethal military supplies to Nepal. Nepal and India also agreed to share intelligence and to cooperate on constructing an airbase for the Nepalese army in the western part of the country. India also agreed to provide training to Nepalese security personnel to upgrade their capabilities and to share intelligence for improving security.

Although India and Nepal have been traditional allies and virtually all of the training and supplies of the Royal Nepal Army were sourced from India, both countries stalled defence cooperation in 2005 after King Gyanenedra took over and Nepal became a republic. India was skeptical about military cooperation due to the fear of Maoist in the Nepal Army.

At this juncture, India is being optimistic and trustworthy about Nepal and has even honored Chief of Nepal Army General Chhattraman Singh Gurung with the title of “Honorary Chief of Army Staff” in India. General Gurung visited various dignitaries and participated in high-level meetings during his Indian visit.

An opportunity not to be missed, we need to get over any cost concerns and look at this as an investment.We could transfer some Older T-55's to begin with and then look at transferring some older T-72's(after upgrading them to AJEYA standards). We need to expand other relations by offering money and development as well.

some tanks india can even give for free like T- 55s as we no longer use them as frontline tanks. they can be given some T-72s at concessional price.
ammo, sighting systems should not be a big deal.
agree with BR. india can use this opportunity so Nepal atleat cooperates in our fight with pak terrorists based in Nepal. also india will have a leverage viv-a-vis china, which has built up bridges with the maoists.

BY : myrepublica
India, which has decided to resume military aid to Nepal, is likely to supply 50 phased-out tanks at discounted rates.India´s The Telegraph newspaper reported the deal, quoting an unnamed senior Defense Ministry official in New Delhi on Tuesday.
The report said Nepal has specifically asked whether it can acquire 50 tanks from the Indian Army at discounted rates. These are Ajeya T-72 tanks that are being replaced with the Bhishma T-90 in the armored regiments.
Besides the tanks, officer cadets from Nepal will get more seats in the Indian Military Academy and the recruitment of Nepalese Gorkhas in the Indian Army would be increased.The decisions followed talks, Nepal’s visiting army chief, General Chhatraman Singh Gurung, held with Indian security officials in the Indian capital.
On recruitment of more Nepali nationals to the Indian Army, the southern neighbor has proposed to raise an additional battalion that will increase the recruitment from Nepal from the current level of about 1,600 soldiers a year.There are seven Gorkha Rifles regiments in the Indian Army, each with five or six battalions of about 900 soldiers. Gorkhas from Nepal and India are recruited not only in these battalions but also in other regiments such as the special forces (parachute battalions), the newspaper said.
Nepal Army has also enquired whether India can raise the supply of military hardware to the level prevalent nine years back. In 2005, India scaled down its military aid, following the February 1 coup by the then king Gyanendra. But the actual reduction in military assistance had begun in 2001, with the Maoist insurgency intensifying in Nepal.
General Gurung, an alumnus of the Indian Military Academy (IMA) in Dehra Dun who attended the passing-out parade of officer cadets on Saturday, also held talks with the Indian Army’s director-general of military training. He said it was his wish to set up an institution like the IMA in Nepal.
At the academy, Gurung visited the room where he had stayed as a cadet. He also spent time in its archives searching for a photograph of himself with the late Field Marshal Sam Manekshaw, whom he described as his hero.
Gurung was honored with the rank of General in the Indian Army by the President on Monday. He is slated to meet the external affairs minister, the foreign secretary and national security adviser on Wednesday.Gurung’s visit comes close on the heels of an India-Nepal defence cooperation committee meeting in Kathmandu last week.
The Indian Army, the paper said, looks at the demand of the Maoists for “integration” of their PLA troops in the Nepal Army ranks — under the country’s peace accord — with “suspicion”.The delegations of the two armies have exchanged notes on security, with the Nepalese team of the view that the Maoists can present a military challenge yet again.

India likely to supply 50 phased out Ajeya T-72 tanks to Nepal IDRW.ORG
You must log in or register to reply here.
Similar threads
Nepal seeks to deepen 'development partnership' with India
Nepal economy thread - news and Discussions
Nepal gets a consulate in Chinese city of Chengdu where India was promised one
India should stoke Hindu Nationalism in Nepal to counter Chinese influence
Share:
Facebook Twitter Reddit WhatsApp Link