Neda Agha-Soltan:a symbol of the brutality of the Iranian regime and resilience 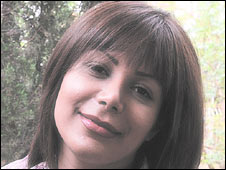 Neda Agha-Soltan was shot in the chest, witnesses say

Amateur video apparently showing a young Iranian woman dying in Tehran after she was allegedly shot by pro-government militia on Saturday has caused outrage in Iran and abroad.
The woman, Neda Agha-Soltan, was buried on Sunday.
Her fiance, Caspian Makan, told BBC Persian TV about the circumstances of Neda's death.
She was near the area, a few streets away, from where the main protests were taking place, near the Amir-Abad area. She was with her music teacher, sitting in a car and stuck in traffic.
She was feeling very tired and very hot. She got out of the car for just for a few minutes.And that's when it all happened.
That's when she was shot dead. Eyewitnesses and video footage of the shooting clearly show that probably Basij paramilitaries in civilian clothing deliberately targeted her. Eyewitnesses said they clearly targeted her and she was shot in the chest.
She passed away within a few minutes. People tried to take her to the nearest hospital, the Shariati hospital. But it was too late.
We worked so hard to get the authorities to release her body. She was taken to a morgue outside Tehran. The officials from the morgue asked if they could use parts of her corpse for body transplants for medical patients.
They didn't specify what exactly they intended to do. Her family agreed because they wanted to bury her as soon as possible.
We buried her in the Behesht-e-Zahra cemetery in southern Tehran. They asked us to bury her in this section where it seemed the authorities had set aside spaces for graves for those killed during the violent clashes in Tehran last week.
On Monday afternoon, we had planned to hold a memorial service at the mosque.
But the authorities there and the paramilitary group, the Basij, wouldn't allow it because they were worried it would attract unwanted attention and they didn't want anymore trouble.
The authorities are aware that everybody in Iran and throughout the whole world knows about her story. So that's why they didn't want a memorial service. They were afraid that lots people could turn up at the event.
So as things stand now, we are not allowed to hold any gatherings to remember Neda.

The man who tried to save Neda​

One of the stand-out images of the protests in Iran is of a young woman dying from gunshot wounds on the streets of Tehran.
Neda Soltan was shot while attending a protest, and the footage shows her lying on the ground in a pool of blood and two men trying to save her.
Dr Arash Hejazi, the man in the white shirt who rushed to her aid, is studying in England.
He spoke to the BBC's Rachel Harvey about the incident.

Caspian Makan, the fiance of the young Iranian woman shot last week, tells Al Jazeera of her last moments. "Neda", which is the Farsi word for voice, was allegedly shot dead by a Basij soldier in Tehran last week.

some media faux-pas.How media and social networking sites mixed up the photographs of Neda Agha-Soltan with that of another lady Neda Soltani


Neda Lives​
The little-known story of Iran's other Neda Soltani and how a picture changed her life forever.

Neda Soltani is the ordinary Iranian woman whose image spread last summer in an instant around the world. She's a symbol of the brutality of the Iranian regime and the resilience of Iran's movement for democracy.

A woman named Neda did indeed die last summer on the streets of Tehran, gunned down by members of an Iranian militia. Her full name was Neda Agha-Soltan. But mixed in with the tragic footage of that Neda's death, broadc ast around the world in a viral video that galvanized world opinion against the Iranian regime, was a compelling Facebook snapshot of a smiling young beauty in a flowered headscarf.

Her name was Neda, too -- Neda Soltani.

What follows is the incredible story of what happened when the age of social media collided with political upheaval in a land behind a curtain -- and how it even forced a 32-year-old graduate student into political exile.

In her small apartment in the city of Offenbach, Germany, where she has been granted political asylum, Neda Soltani is working to piece back together her life. She looks older now than she does in her famous photo. Understandably: The past year has been an ordeal, one that was thrust upon her against her will.

Until last year, Neda Soltani was a teaching assistant for English literature at Tehran's Islamic Azad University, where she was doing graduate work on feminine symbolism in the work of Joseph Conrad. She wasn't a supporter of the regime, but she also didn't belong to any sort of active opposition group, even in the heady days after the disputed election. She was focused on her academic career above all else; while Iranians were marching in the streets, she was correcting her thesis. She led the prosaic life of Tehran's silent apolitical majority. "I worked for 10 long years to get my position at the university," she told Germany's Sueddeutsche Zeitung in February. "I was earning my own money, I had friends, I would go out and I had fun."

All that changed on June 20 of last year, when a choppy video appeared on YouTube depicting the gruesome and chaotic death of a young Iranian woman. Neda Soltani watched the clip, not knowing it was the beginning of the end of her own life as well.

The process began innocuously enough, resting on a foundation of journalism's most basic building block: competition for a scoop. Working only with the first name heard on the YouTube video, international news organizations raced one another to unearth more information on the young women who died on camera. Forgoing fact checks, editors in New York and London allowed small details to get lost in translation as they communicated with their reporters on the ground: "Agha-Soltan" lost its hyphen, "Agha" was dropped entirely, or "Soltan" picked up an "i". These errors even found their way into HBO's valedictory documentary airing tonight. In portraying the reporter from the Guardian who purportedly first determined her name, the film briefly includes a screen shot of his story from last June that itself was published under a misleading headline: "Neda Soltan's family 'forced out of home' by Iranian authorities."

That's where Facebook comes in. On June 21, eager Green Movement supporters decided to dedicate a page on the social networking site to the "Angel of Iran." Serendipitously, the martyr herself had a personal Facebook from which they could borrow her portrait. Framed as a standard passport shot, the photo showed an attractive young woman with a relaxed and innocent smile who wore a head scarf that revealed several inches of dark brown hair. It was a perfectly adequate resource for activists looking to inspire sympathy -- except for the fact that the likeness, like the Facebook page from which it was taken, belonged to Neda Soltani, the quiet, unbloodied scholar of English literature.Having relied on the major networks and newspapers for a lead, the Facebook activists themselves then served as a source for the mainstream media. The CNN and BBC started illustrating their stories with the "Angel of Iran" photo; news agencies and newspapers were not far behind. Of course, blogs and other social networking sites were also off to the races in spreading the mistaken photo. And it wasn't long before the photo made its way back into Iran and went viral among the Green Movement.

But before the T-shirts and the posters and the ad hoc candlelit street altars, Neda Soltani awoke on June 21 of last year to discover an inbox full of countless requests to befriend her on Facebook. Then came the phone calls. A professor burst into tears when he heard her voice.

Neda didn't begrudge the initial error. There was some resemblance between her and the slain protester, after all. Neda thought the mistake was liable to correct itself eventually, but decided to speed the process along by reaching out to Voice of America, the U.S.-backed satellite network that was among the most strident in using her photo to agitate the Iranian public. In an email, she explained that there had been a mix-up; they had been using a false photo, and she included other photos of herself as evidence.

What followed was a disheartening education in applied media ethics. Instead of issuing a correction, VOA promoted the very photos Neda had used to absolve herself as "exclusive" images of the slain protester. The momentum of the story overwhelmed attempted interventions of the truth. Neda tried repeatedly to sway different networks and news agencies, but for all intents and purposes, she had lost control over her face. On Internet forums, her requests that her photo be removed were met with the accusation that she was a stooge for the regime. "You won't take our angel away from us, you bastard," one Internet commenter writes in reply to her plea. On June 23, 2009, the parents of Neda Agha-Soltan released for public use a photo of their daughter -- the one who, in fact, had been killed -- but it had trouble competing with the existing, if false, image of Neda for primacy as the face of Iran's freedom movement.

The Iranian regime was not sympathetic to Neda's plight. Instead, they saw in it an opportunity to add to their steady stream of anti-activist propaganda, and they pressured Neda to testify to the Iranian public that there never had been a murder to begin with. The regime's suggestions were combined with threats, and Neda began feeling concerned for her safety and that of her family. She decided she had no choice but to flee. So on July 2, 2009, she packed a bag, paid a smuggler with her meager savings, and managed to arrive in Greece and then Germany, where she has a cousin. One day after her departure, on July 3, the BBC announced on-air a correction in its use of Neda Soltani's photo. It was of no longer any use to Neda, who was adrift in Germany, homesick and alone.

As a political refugee in Germany, where she doesn't speak the native language, Neda has started to supplement her meager state assistance by working as an English teacher. Meanwhile, her photo still sometimes appears in news reports in major media like CNN or Germany's Der Spiegel. She has accepted her fate, which is not to say that she embraces it. All she wants, she says, is to lead a normal life, but she is not optimistic. "I've lost everything," she told the German broadcaster 3sat in an interview in March. "I don't know what I'm doing here, and I don't know how I'll go on. I have little hope."

If Neda has tired of her perpetual pursuit to set the record straight, of her repeated and unheeded denials that she was the martyr everyone was looking for, it's only fair. And indeed, it seems that Neda spoke too soon: It turns out she is a sort of martyr after all.
You must log in or register to reply here.
Similar threads
Pak-Afghan relations —Agha H Amin
The Pakistan Army From 1965 to 1971-Maj (Retd) AGHA HUMAYUN AMIN (Pakistan Army)
Share:
Facebook Twitter Reddit WhatsApp Link