RANCHI: Naxalism, which started off as a people's movement, has now become a nearly Rs 1500 crore organized extortion business in the form of 'levy', police and central security officials said.

CPI (Maoist) and especially its splinter groups, which extort the money hardly pump it back for running the movement but instead use it to maintain luxurious life-styles for their masters, the officials said.

The Naxal literature and documents seized by central security agencies and state police forces during their operations have revealed intricate details of "levy" extorted by groups which run in several hundred crores every year.

The 'levy' is not only paid by the contractors working in the areas dominated by the Naxals but also by the industrial houses including some of the nationally reputed ones, the officials said.

Though, CPI (Maoist) still remains the prominent Naxal group in Jharkhand, there are other splinter groups which too have now started imposing 'levy' besides indulging in kidnapping, looting and narcotics trade, which results in around Rs 300 crore as annual income from the state.

If a conservative estimate is taken of the income generated from 'levy' in the seven most Naxal-infested states -- Jharkhand, Chhattisgarh, Andhra Pradesh, Orissa, Bihar, West Bengal and Maharashtra -- security agencies feel the collection from these areas, which are commonly referred to as 'red corridor', amount to nearly Rs 1,500 crore.

The Naxals have even come out with a card, recovered by forces, which clearly shows the exact amount of 'levy' to be paid by contractors, petrol pump owners and land owners.

It usually ranges from 10% of the project cost for those making unpaved roads to five per cent for small bridges and others.

Besides the fixed levy, the left-wing extremists groups also demand money from industries functioning in the areas "as and when they need" and even issue receipts for the same.

"There are six left-wing extremists groups operating in the state out of which the People's Liberation Front of India, earlier known as Jharkhand Liberation Tigers, is mostly made up of criminals. The groups operate no longer for ideology but purely for extortion," CRPF DIG (Jharkhand) Alok Raj said.

"It has come to our notice that in certain incidents, contractors have themselves approached the Naxals to blow up the roads built by them because they had used inferior material at first place. As the roads are blown away, no quality inspection takes place," Director General of Police (Jharkhand) V D Ram said.

Officials say, in most cases, the amount generated in the form of levy usually goes into a "luxurious lifestyle" of Naxal chiefs.

"The chiefs lead a luxurious life with all modern facilities. Though, they forcibly recruit children in their cadre, their own kids study in good public schools," officials said.

A Para-SF trooper in Manipur​

The Naxals, who surprised everyone by using rocket launchers for the first time during the Lok Sabha polls, have already set up about four units to manufacture weapons and ammunition, say central security agencies. The Naxals, who usually target security forces with manual improvised explosive devices, are now slowly developing remote-controlled IEDs which can be activated from a distance with just the push of a button.

The improvement in fire-power is being supported by intensive training on the lines of regular forces,say sources. Central security agencies and local police sources say the Maoists have started two factories each in the dense forests and hills of both Jharkhand and Chhattisgarh. Sources say that though another such factory existed earlier in Bihar, the Naxals have dismantled it.

Early last year, a combing team of the CRPF and the local police had come across one such unit used for making small bombs and mortar shells in Jharkhand. The Naxals who are trying to improve their firepower have also come out with the deadly 'Claymore Mines', or what are often called 'directional IEDs'. 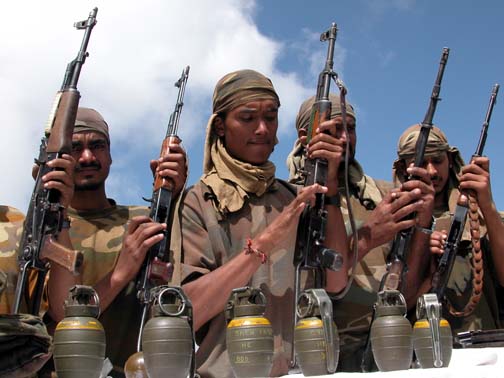 Paramilitary personnel prepare for an encounter​

Unlike in the past, when IEDs use to be buried beneath the road in a small can, the Claymore Mines, which come with a thick aluminium plate, can be fitted to a tree.

The IED, when exploded, will deflect the shrapnels in a direction opposite to the plate, thus focusing them to a particular area as against conventional IEDs where the impact is in a circular area around the device. Certain blasts in Chhattisgarh have pointed to the possibility of remote-controlled IEDs being used but they are yet to become a standard strategy for the Naxals, say sources. "Naxals are constantly trying to improvise and have also set up factories for this. During searches by security personnel, they have come across few chips which suggest that they are trying to develop remote-controlled IEDs. If they succeed, it would prove deadly," according to a source. "The Naxalites also make their own guns besides those snatched from policemen and procured from outside. Their locally-made guns called 'pahar' can be used to severely injure a person if not kill him. The pellets break into pieces on impact and hence are deadly," the source says.

The left-wing extremists are known for using gelatin sticks in their explosives. They are sourced from mining areas, say sources. A source says that the Maoists also undergo military training similar to that of securitymen, which "suggests a possibility of ex-army or ex-policemen" helping in preparing training modules, whether due to force or their own wish.

One of the Naxal training CDs seized by security forces in Andhra Pradesh gives an insight into the training modules with the militants practising crawling backwards. Security forces have also come across abandoned centres of Naxals having rope climbing, ladder, crawling tunnels and other obstacles used for hard training. The Naxals have also hit upon an innovative way to store their ammunition by hiding it in branded plastic water tanks placed in the ground and covered with mud and stones. Sources said the logic behind it was that there are less chances of formation of moisture, which might damage the ammunition.

Inviting serious discussion on strategies and tactics to deal with this pestilence.

we have 2 options here

Andhra Pradesh cops/greyhounds have been enough successful in curbing naxalism here using only Force. Most members have either surrendered or were killed.
Why is the NW/jharkand areas still affected when we can send in the army to sweep the jungles?

^^it requires political will to take out Naxals, we have everything else.

2) or we can follow the tatics followed by the Kerala police in the late 60's and 70's
Click to expand...

Can you elaborate on the second point. and which ought to be adopted in your analysis f-14. TIA.

The biggest roadblock to fighting the self proclaimed red army is the lack of consensus between the Centre and state governments. However, a federal agency to tackle crime cannot be set up as it impinges on the independence of the state governments, which according to them is a bigger issue then tackling terror.

Our priority needs to be to strip the naxals of the growing local support. If they manage the current levels of growth of public support, I fear that their elimination can become a mountain of a task.

in the 1960s Kearla was a Hotbead of maoism the then the DG(Crime) Kerala Jayaram Padikkal recruited many youngsters from the campuses in Kerala, trained them and made them infiltrate the Naxalite movements.. The kerala police under men like Padikkal the KP chased the Naxals like dogs but there were lots of HR (Human Rights) Vilations

Unlike the talibans who hide in those caves we have an easy problem at hand of sweeping forests for naxals. But again the deadlock is political will. Even in Andhra Pradesh it was more of political Interest than will for chasing them down.
You must log in or register to reply here.
Similar threads
Left Wing media and Urban Naxals trying to manipulate history with their nonsense; News and Discussions
Urban Naxal watch
Urban naxalism- strategy and modus operandi
Maharashtra incurs cost of Rs 9 cr on helicopter surveillance of Naxal-infested areas
Share:
Facebook Twitter Reddit WhatsApp Link