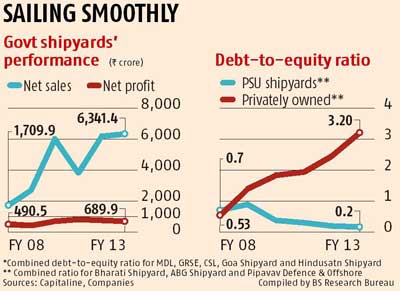 For a change, government-owned companies are doing better than their private sector counterparts. In an otherwise bleak operating environment for shipbuilders, state-owned shipyards such as Mazagon Dock (MDL), Garden Reach Shipbuilders & Engineers (GRSE), Cochin Shipyard and Goa Shipyard have bucked the trend, thanks to a bulging order book courtesy the Indian Navy and Coast Guard.

In FY13, five state-owned shipyards (Vishakhapatnam-based Hindustan Shipyard is the fifth) together reported net sales of Rs 6,341 crore and a net profit of Rs 689 crore. In the past five years, their combined net sales have grown at a compounded annual rate of 30 per cent, while net profit expanded at 7.1 per cent.

The growth in total revenues, which includes changes in inventory and treasury income, was lower at 10 per cent a year. Year-on-year revenue growth is highly volatile in the industry, due to long lead times in ship-building. Besides, a few months' delay in commissioning (not uncommon for warships) have a big impact on revenue and profit growth for that year.

The growth has resulted in a sharp improvement in the financial health of these public-sector units (PSU). For example, the combined debt-to-equity ratio of these five companies has declined to 0.17 in FY13 from a high of 0.88 in FY09. Except Hindustan Shipyard, all PSU shipbuilders are now debt-free, cumulatively sitting on cash and bank balances worth Rs 8,700 crore at the end of March 2013, two-and-a-half times their networth.

In contrast, private-sector shipyards struggle with stagnant revenues and rising indebtness. The combined leverage ratio for three listed ones – Bharati Shipyard, ABG Shipyard and Pipavav Defence and Offshore Engineering (formerly Pipavav Shipyard) rose to 3.2 in FY13 from 0.53 in FY08. Their combined borrowings during the period ballooned to Rs 14,000 crore in the last financial year from Rs 1,346 crore in FY08. This has resulted in a sharp spike in interest burden that now exceeds their operating profit. Bharati and ABG have applied for corporate debt restructuring (CDR) to help in a financial turnaround.

Mumbai-based MDL has been the biggest beneficiary of India's naval build-up followed by GRSE. With revenues of Rs 2,860 crore and net profit of Rs 412 crore in FY13, MDL was India's second-largest and the most-profitable shipyard in FY13, behind Pipavav Defence. GRSE is the fastest-growing,having trebled its revenues since FY10. Profitability didn't keep pace with revenue and rose only 20 per during the period. Goa Shipyard has reported a more modest growth.

"Over 99 per cent of our revenues come from building ships for the Navy and only if we have spare capacity do we bid for commercial orders," says a spokesperson at MDL, which is a defence ministry PSU. The shipyard is currently building four warships and six Scorpene-class submarines for the Indian Navy, under project 15B. MDL, along with GRSE, is also in the fray to build seven warships under navy Project 17A.

The total project, worth Rs 45,000 crore, is expected to split between these two defence shipyards. MDL refused to put a figure to its order book.

GRSE, is currently sitting on Rs 10,000 crore worth of orders from the navy and coast guard, which will more than double once the government takes a final call on Project 17A. "We expect a further increase in the order book from the navy and have expanded capacity in anticipation. We now build four ships simultaneously," said a GRSE spokesperson. In the past three years, GRSE's investment in fixed assets has nearly doubled and it has expanded its design and engineering capability. Meanwhile, Cochin Shipyard is building India's maiden indigenous aircraft carrier, INS Vikrant. Besides, it has a number of fast patrol boats.

The only laggard among the lot is Hindustan Shipyard, which remains a loss-making entity and its net worth has turned negative on account of accumulated losses. The vizag based shipbuilders has reported losses in six out of last ten year and had total accumulated losses of Rs 1071.3 at the end FY13.

Lets hope Hindustan Shipyard Limited will return to profit in the coming few months, it is of utmost importance that the ship building standards of HSL is not compromised due to its unprofitability. INS Aridhaman submarine is the next in line SSBN and its delivery should not be affected. It is of national importance, the govt has to take steps to ensure HSL makes profit...
You must log in or register to reply here.
Similar threads
Lab Creates Seaweed Meals to Help Navy
Egyptian navy helps Indian submarine in distress
Navy to help Vietnam's submarine fleet
Pakistan Navy chief visits Russian warship. Should India worry?
Share:
Facebook Twitter Reddit WhatsApp Link