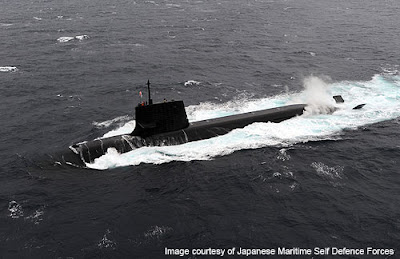 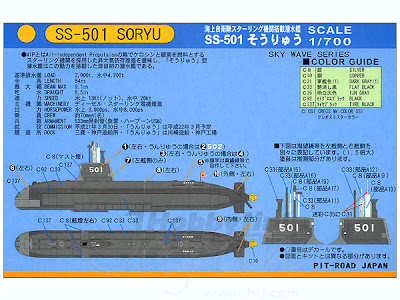 THE admiral in charge of planning for Australia's next generation of submarines and the chief defence scientist are studying an advanced new submarine in service with the Japanese navy.

Rear-Admiral Rowan Moffitt, head of the Royal Australian Navy's Future Submarine Program, and Dr Alexander Zelinsky, the Chief Defence Scientist, travel to Japan this month to look at the Soryu-class submarines, which started service with the Japan Maritime Self-Defence Force three years ago.

Access to the Soryu technology was discussed during a visit to Australia last month by the Japanese navy's chief, Admiral Masahiko Sugimoto. It was only in December that Tokyo lifted its post-World War II embargo on defence exports.

The 4200-tonne Soryu-class boats are the only new conventional submarines of the size and capabilities set out in Canberra's 2009 defence white paper for 12 new submarines to take over from the Collins-class subs from the late 2020s.

''Our strategy with the Japanese is one of hope, because there are some very attractive characteristics about the Japanese submarine,'' Rear-Admiral Moffitt said.

As well as having a close alliance relationship with the United States similar to Australia's, Japan's navy operated in the same Asia-Pacific environment, which was reflected in its submarine design, he said.

''Their submarine, by all accounts, and their design and the evolution of that design, has by all accounts brought them to the point of having a very good submarine,'' Rear-Admiral Moffitt said.

''However, submarine technology tends to be crown-jewel stuff for nations, it tends to be at the most extreme end of sensitivity that nations have about protecting their intellectual property - especially if they have developed it themselves, as Japan has, as the US has. They've invested a vast amount of money doing that.''

Under a $214 million allocation in this year's budget, the RAN has stepped up work on selecting the new submarine design. Four options are: Adapting an existing ''military off the shelf'' or MOTS submarine, a large ''evolved MOTS'' design, an evolution of the Collins class, and a completely new Australian design.

Until the Soryu became theoretically available, off-the-shelf submarines included only German, French and Spanish designs of about 2000 tonnes.

ie Royal Australian Navy is in talks with the Japanese to buy the latter's newest Submarine. A rather surprising development since submarines are potent weapons given Japanese pacifist stance.
Last edited: Jul 10, 2012

With the way PLAAN has been expanding it's surface combatants and also their Submarines, Japan had to respond.

They will not get Diesel subs from the US, so the best alternative was for them to develop their own. Also generally inducting, new aircraft or ships attracts more news and attention, which considering the divided opinion in Japan, the Govt. would like to avoid.

The 4 contenders that are being evaluated as potential off-the-shelf buys in this initial stage:

1) DCNS' Scorpene, which has been bought by Brazil, Chile, India, and Malaysia. It includes an option to add the MESMA AIP section, for longer underwater running time.

2) Navantia's S-80. So far, only Spain has bought it, but it's designed for size, range, and compatibility with american systems & weapons. Navantia is currently the RAN's biggest shipbuilding partner, with very deep experience and partnerships in Australia thanks to the Air Warfare Destroyer and LHD projects.

3) TKMS HDW's U212A/U214, which has been sold to Germany, Greece, Italy, South Korea, and Turkey. South Korea's world-leading shipbuilding firms can even build the design under license, which may create interesting collaboration opportunities in Australia. The class comes with AIP built-in, and has undertaken some long trips in German service.

4) Japan's new 4,200t Soryu Class, which is far larger than any of the European submarines. Japan changed some of its laws in December 2011, allowing it to export some items to vetted allies.
A

Japan might be eyeing to fight China by proxies... Ships for Philippines and submarines for Australia. If they can't do it themselves (because of Constitutional restrictions) then they might as well help arm their neighbors who have no similar restrictions and can thus openly confront China...

Japan has the technology and Japan requires BIG money badly!

They produced the Zero and that was a havoc to the Allied Forces!
A

I don't think Japan is planning to go all out on foreign military sales of its weapons. I think they want to sell their weapons only to close allies and those that can help them square off with China in the Pacific. If this sale will materialise it will benefit Japan more in that it will earn from the sale (to help keep its military R&D) and at the same time this is a force multiplier for Japan since Australia is a close ally against China and will most definitely operate their new subs in the Pacific (against China)... master stroke if you ask me.

My question is big diesel submarine the best solution for Australia Requirement. As SSK tend to be smaller and operate most in the littorals.

Submarines are not meant to operate in littoral zones. The bigger the submarines, the better the range and weapons load.

The Qing class submarines which PN is acquiring said to be weights 5000 tonnes of displacement. PN actually was under negotiations to acquire a few Type 214 submarines to be builted in thier dockyard but, dropped the deal in favor China.

well we also have to see what we are buying and long term things .but we have to increas our number .

There's another deal in the pipeline - http://defenceforumindia.com/forum/...-may-sell-sea-rescue-aircraft-us-2-india.html
D

Virendra said:
There's another deal in the pipeline - http://defenceforumindia.com/forum/...-may-sell-sea-rescue-aircraft-us-2-india.html
Click to expand...

asianobserve said:
Japan might be eyeing to fight China by proxies... Ships for Philippines and submarines for Australia. If they can't do it themselves (because of Constitutional restrictions) then they might as well help arm their neighbors who have no similar restrictions and can thus openly confront China...
Click to expand...

right PH go up against china, its not like japan give PH some aegis ddg. as for australia, i doubt china want to invade aus.
A

I was being clumsy there. But if Japan do supply Australia with submarines or at least submarine tech then there has to be a significant security and political back-scratching.
W

Japan has the technology and Japan requires BIG money badly!

They produced the Zero and that was a havoc to the Allied Forces!
Click to expand...

s002wjh said:
right PH go up against china, its not like japan give PH some aegis ddg. as for australia, i doubt china want to invade aus.
Click to expand...

One big country doesn't invade another big one any more. That time is past (unless there's World War III gong on)
Now there's economic imperialism and resource crunches to deal with. Methods of exploitation have evolved.
Anyway, China, Philippines and Australia are not the focus of this thread. India, Japan are.
Lets stick to the topic.
You must log in or register to reply here.
Similar threads
Australian Navy Eyeing Off New Japanese Submarines
Eye On China: India To Deliver Kilo Class Submarine Ins Sindhuvir To Myanmar Navy
MiG eyes deal to supply military jets to Navy
To fill urgent Indian Navy need, Centre eyes Canada’s used Sea King helicopters
Share:
Facebook Twitter Reddit WhatsApp Link