Threats to the security of the country through the sea route are assessed at regular intervals. Monitoring, review and assessment of the coastal security construct is an ongoing process and is undertaken on a periodic basis. National Committee on Strengthening Maritime and Coastal Security (NCSMCS) monitors the progress in respect of coastal security initiatives, any shortfall encountered, and decides on measures to plug the gaps.

A coastal security ring all along our coast is provided by Marine Police, Indian Coast Guard and Indian Navy.

Other measures include improving surveillance mechanism, enhanced patrolling and joint operational exercises conducted on regular basis among Indian Navy, Indian Coast Guard, Marine Police, Customs and others. Installation of radars covering the country’s entire coastline and islands is also an essential part of this process.

This information was given by Raksha Rajya Mantri Dr. Subhash Bhamrein a written reply to ShriArvind Sawant and othersin LokSabha today. 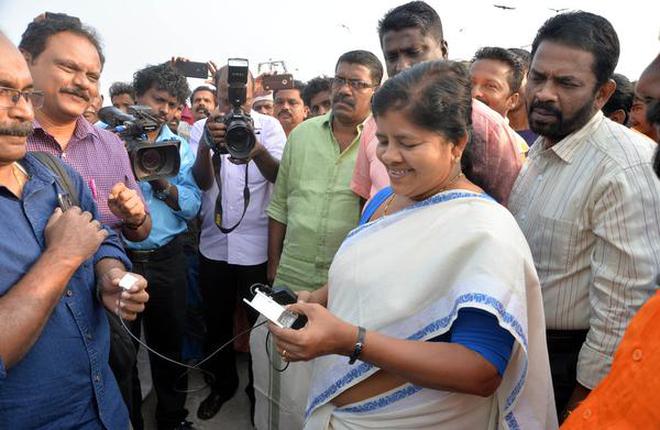 (From left) A screen grab of a mobile equipped to receive messages from the NAVIC set; A boat carrying a NAVIC receiver puts out to sea for user trials from the Vizhinjam harbour on Friday; and Fisheries Minister J. Mercykutty Amma examines the Navic device at the Saktikulangara harbour in Kollam. | Photo Credit: C_SURESH KUMAR

As many as five fishing vessels equipped with satellite navigational equipment put out to sea from three locations along the Kerala coast on Friday for user trials of the fleet safety management system. Officials of the Indian Space Research Organisaton, the State Disaster Management Authority and the Fisheries Department are closely monitoring the performance of the NAVIC receiver sets provided by the ISRO to keep track of the vessels and issue weather warnings to the fishers on board.

M.C. Dathan, Scientific Adviser to the Chief Minister, said test messages uplinked from the ISRO Telemetry, Tracking and Command Network (ISTRAC) station were being transmitted every hour to the two outboard engine vessels that had set out from Vizhinjam, along with two trawlers from Neendakara and a vessel belonging to the Central Institute of Fisheries Technology from Kochi. Till late noon, the monitoring agencies had reported that the system was working well.

All the boats involved in the trial run are expected to return by Saturday evening after travelling up to 200 km from the coast. A review meeting has been scheduled for Tuesday to analyse the results.

Apart from weather warnings, the system also provides potential fishing zone advisory and maps to fishers up to a distance of 1,500 km. In the wake of the Ockhi tragedy, the government has announced plans to equip all fishing vessels with NAVIC sets. The collaborative project between the Government of Kerala and the ISRO involves the use of India’s own regional satellite navigation system to ensure the safety of fishermen at sea. The NAVIC constellation includes seven satellites in the IRNSS series launched by the ISRO.

The soap box-sized receiver on board uses an antenna to pick up satellite signals that are relayed as text message and maps to Android phones equipped with a special software application. For the trial run, the messages are in English, but Malayalam will be used later. A voice messaging system is also under consideration.

The government has formally requested the ISRO to provide two- way communication using the NAVIC sets on fishing boats. Currently, the receivers can only transmit weather warnings and state-of-the-sea information to the vessels at sea. Mr. Dathan said the proposed facility would allow fishers to communicate with the coast within the operational range of the NAVIC receivers.

An official press note issued here said the ISRO had initiated moves to develop a two-way communication sea mobile handset for less than ₹15,000. In the meantime, efforts are on to tweak the NAVIC receivers and provide additional features.

The government is planning to use the facilities at Keltron to manufacture the satellite navigational equipment to be installed on fishing vessels for fleet safety management, Fisheries Minister J. Mercykutty Amma has said.

The ISRO had agreed to transfer the technology for mass manufacture of the equipment, she said.

India to have Marine Police Force to guard coastline: Sources

What is the difference between Indian Coast Guards and Central Marine Police Force?

Jameson Emoni said:
What is the difference between Indian Coast Guards and Central Marine Police Force?
Click to expand...

Central Marine Police force will man the land side of the coast and upto 12 nm of the sea board. They will replace the Marine Police of the State police from the above duty, whose role would now only will be limited to law and order and prosecution. Loosely the relation shared can be similar to GRP and RPF.
You must log in or register to reply here.
Similar threads
Turkey In Talks With 10 Nations Including Pakistan To Sell Its Most-Powerful Drone – Bayraktar TB2 UCAV?
India’s MAYA MALE UCAV and Eklavya Wingman UAS
Visual Content Ideas for Geo-politics, History, Wars, Historic Events & National cause
The Impact of Climate Change on National Security
Share:
Facebook Twitter Reddit WhatsApp Link