Nail house in the middle of a newly built road 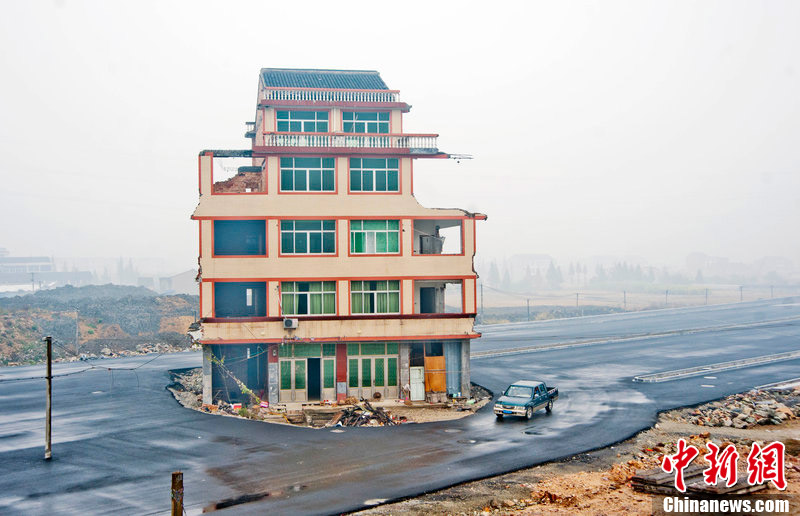 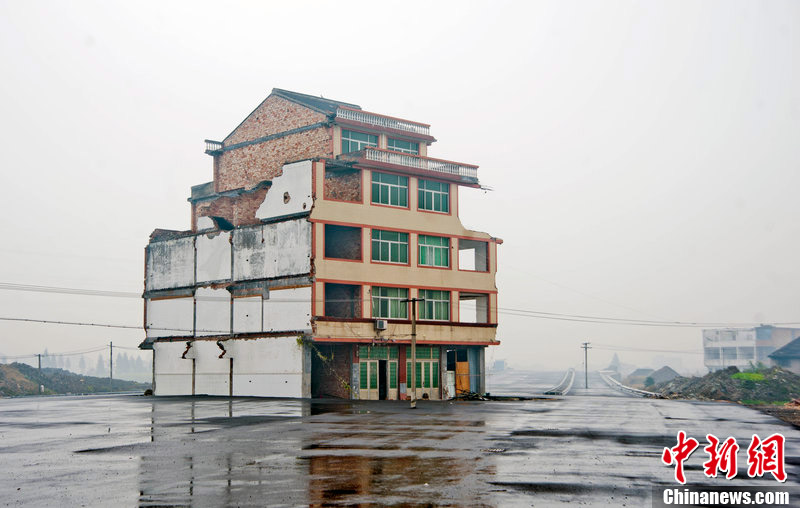 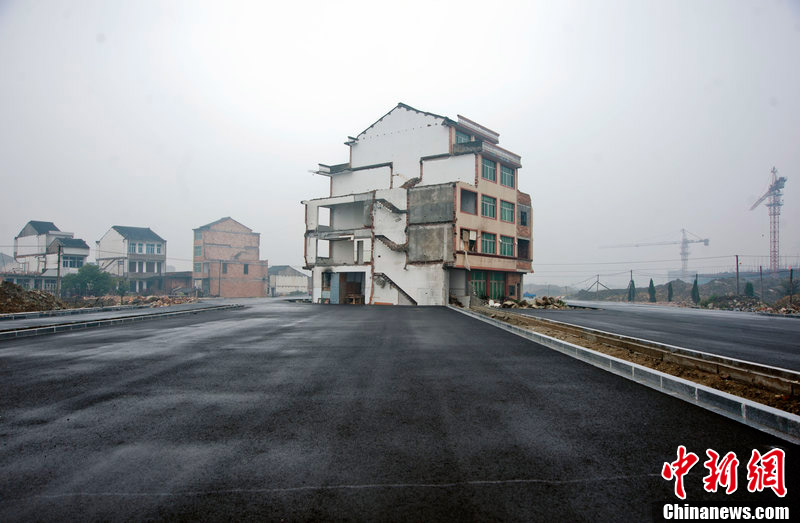 The house owners fail to agree on the compensation with the authority and refuse to move.

But why didnt the Government bulldoze them and pay compensation?

One fine day they could have a 18 wheeler in heir living room.

So the government failed to use force where necessary.It's a tragedy in the making.What about that electric pole :shocked:
P

Being China they still went ahead and built the road - in India litigation would have gone on for 20 years while the road remained dug up rubble.

I am surprised that these chaps could ignore the 'Chai' (demolish) poster!

It has always worked!

Notwithstanding, apart from this building being in between, the highway look real great to drive on at good speed!

The Chinese do build great highways!

This house has been demolished.

pmaitra said:
This house has been demolished.

Good for the drivers!

nimo_cn said:
Good for the drivers!
Click to expand...

your poster img is so cool i mean so hot

BEIJING (AP) — Authorities have demolished a five-story home that stood incongruously in the middle of a new main road and had become the latest symbol of resistance by Chinese homeowners against officials accused of offering unfair compensation.

There was no immediate confirmation from Luo, whose cellphone was turned off Saturday

The couple had been the lone holdouts from a neighborhood that was demolished to make way for the main thoroughfare heading to a newly built railway station on the outskirts of the city of Wenling in Zhejiang province.


The razing comes a week after images of the house circulated widely online in China, triggering a flurry of domestic and foreign media reports about the latest "nail house," as buildings that remain standing as their owners resist development are called.


Luo, 67, had just completed his house at a cost of about 600,000 yuan ($95,000) when the government approached him with their standard offer of 220,000 ($35,000) to move out — which he refused, Chen has previously said. The offer then went up to 260,000 yuan ($41,000) last week.
Real estate is one of the big drivers of China's runaway growth in recent decades. But the rapid development has run into objections from many of the hundreds of thousands of residents who have been forced out to make way for new housing, factories and other business ventures, creating a major source of unrest.


Authorities commonly pressure residents to agree to make way for development with sometimes extreme measures, such as cutting off utilities or moving in to demolish when residents are out for the day. In Luo's case, however, he had told local reporters last week his electricity and water were still flowing.

Village chief Chen said Luo was tired of all the media attention and voluntarily consented to the deal. "Luo Baogen received dozens of people from the media every day and his house stands in the center of the road. So he decided to demolish the house," Chen said.

It was not immediately clear why Luo accepted the compensation in a meeting with officials Friday afternoon when the amount of money offered was the same as a week ago.

When I first saw this picture a week ago (posted by a Chinese poster), I thought that it will be a prelude to further CCP propaganda in the future and here we see it is happening.

the above it is a yahoo news, then cited by a chinese website....

Luo ,in fact,has made great fortune overnight ,by accepting the compensation for the demolishment.

Let's give credit where its due.

you forget all the pressure he went through.
When you will build something out of your blood and sweat, it is not easy to give up.
I remember setting up of my first office, from rented property. finally one of my partner bought it.


sayareakd said:
you forget all the pressure he went through.
When you will build something out of your blood and sweat, it is not easy to give up.
I remember setting up of my first office, from rented property. finally one of my partner bought it.
Click to expand...

in fact, I never feel sympathy for the guy. Instead, I think the guy gets in the way of the public interest ,just for exaggerated
compensation.

Luo obvioulsy looks on CCP government as a fool..

there are always lots of greedy "nail house owners" in CHina.....

and it is absurd that the greedy guy succeed in got 3M$ ,while it cost the guy

India needs to follow this iron fist policy in implementing such projects in india.
I know of many such proposed road in my city along with metro rail , none of its hitting the ground yet.

I presume in China the requirement of the State is paramount.
You must log in or register to reply here.
Similar threads
In the Gulf war, every last nail was accounted for, but the Iraqi dead
U.K. Braces for a Nail-Biter in Scottish Independence Vote
Army intel nails Pak bounty hunters
Yet Another nail in the Aryan coffin
Share:
Facebook Twitter Reddit WhatsApp Link