“Is this a war declared against Christians?” asked Florence Tachio.
Why, yes. Yes, it is. And it was declared 1400 years ago, though the world continues to try to pretend that this never happened and isn’t happening now. 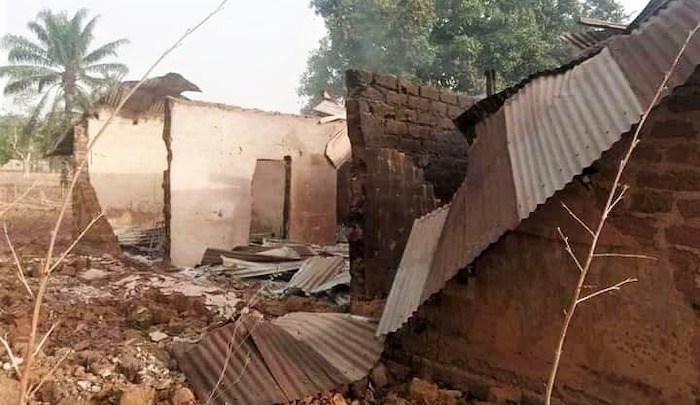 ABUJA, Nigeria (Morning Star News) – More than 100 suspected Fulani herdsmen and Islamic extremist terrorists on Sunday night (March 20) killed 32 civilians, two soldiers and possibly abducted a woman in an attack on a predominantly Christian town in Nigeria, sources said.
In northern Nigeria’s Kaduna state, the assailants raided the town of Kagoro, Kaura County from 8 p.m. to 11 p.m., residents said, destroying about 200 houses in four areas.
“Over 25 Christians were killed, and houses and properties were burnt to ashes in an attack carried out by armed Fulani terrorists in Kagoro,” town resident Samson Luka said in a text message to Morning Star News….
Other comments by area residents echoed the despair: “Is this a war declared against Christians?” asked Florence Tachio. Mercy Waziri said, “I weep for my people! O Lord, arise and let our enemies be scattered!!” Gloria Nyan noted, “The attack on Kagoro last night led to the killing of innocent men, women and children in their homes, and houses in the community were destroyed. This atrocity will never go unpunished, no matter how they try to change the narrative.”…
He gave the name of the missing woman as, “Mrs. Abigail Joshua, from Adan community.” More than 200 houses and 32 shops were set ablaze in the attack, and three vehicles and 17 motorcycles were vandalized, he added.
On Monday (March 21), the government imposed an indefinite, 24-hour curfew on two council areas of Kaura and Jema’a counties. Forcing residents to remain indoors could further endanger lives of Christians in the area, church leaders said.
The Rev. John Joseph Hayab, chairman of the Kaduna state chapter of the Christian Association of Nigeria (CAN), said in a statement on Tuesday (March 22) that Christians were grieving “the continued killings, kidnappings, banditry, and the unimaginable evil going on in our state unabated without any substantial action by the government and security forces.”
“Kaduna state citizens are tired of the government’s rhetorical responses without concrete action taken to protect lives and property,” the Baptist pastor said. “Accordingly, we want to hear and see the killers and kidnappers arrested, as the government’s usual media condemnation whenever there is havoc is not good enough.”
Kaduna state has lost far too many lives to such attacks in the past four years, he said.
“The government’s response is usually in the media. Sadly, the dead cannot read nor listen to the news,” Hayab said. “CAN, therefore, calls on the Kaduna state government to swallow her pride and accept that she has failed the people genuinely seeking help to immediately halt the wanton killings, kidnappings, and terrorist activities going on in the state.”…
On the outskirts of Kaduna city, in Chikun County’s Gonin Gora village, suspected Islamic terrorists on March 11 killed three Christians and abducted four others, local resident said….
Hayab of CAN confirmed the killing of the three Christians and the kidnapping of the four Christian women. He said raids by armed Muslim terrorists and Fulani herdsmen have become so common that Christians are tired of reporting them, especially in light of the lukewarm response of the Nigerian government….
He noted authorities did nothing to rescued recently kidnapped Christians or arrest the perpetrators….
In Dutsen Gayan village, Kajuru County, 11 Christians were kidnapped on March 5, he said….
Numbering in the millions across Nigeria and the Sahel, predominantly Muslim Fulani comprise hundreds of clans of many different lineages who do not hold extremist views, but some Fulani do adhere to radical Islamist ideology, the United Kingdom’s All-Party Parliamentary Group for International Freedom or Belief (APPG) noted in a recent report.
“They adopt a comparable strategy to Boko Haram and ISWAP [Islamic State West Africa Province] and demonstrate a clear intent to target Christians and potent symbols of Christian identity,” the APPG report states.
Christian leaders in Nigeria have said they believe herdsmen attacks on Christian communities in Nigeria’s Middle Belt are inspired by their desire to forcefully take over Christians’ lands and impose Islam as desertification has made it difficult for them to sustain their herds.
Nigeria led the world in Christians killed for their faith last year (Oct. 1, 2020 to Sept. 30, 2021) at 4,650, up from 3,530 the previous year, according to Open Doors’ 2022 World Watch List report. The number of kidnapped Christians was also highest in Nigeria, at more than 2,500, up from 990 the previous year, according to the WWL report.
Nigeria trailed only China in the number of churches attacked, with 470 cases, according to the report.
In the 2022 World Watch List of the countries where it is most difficult to be a Christian, Nigeria jumped to seventh place, its highest ranking ever, from No. 9 the previous year.
Click to expand...

“Is this a war declared against Christians?” asked Florence Tachio.
Why, yes. Yes, it is. And it was declared 1400 years ago, though the world continues to try to pretend that this never happened and isn’t happening now.

Abrahamic religions are curse on Humanity. These religions are totally devoid of Morality, ethics, rationality and logical thinking.

May Allah (pbuh) give these 32 Christians 72 hoors and Lord Jesus die another time to forgive sinners ( Islamists ). Mutual fuckery

Tribal economic land warfare not religious warfare:
Farmer town building tribes vs Herder tribes with each different tribe professing they belong to this or that religion? Fulani tribesmen are herder people (cows, goats, ...) probably the people attacked were farmers.

Rising conflict between herders and farmers in Nigeria is already six times deadlier in 2018 than Boko Haram’s insurgency. To stop the bloodshed, the federal government should improve security; end impunity for assailants; and hasten livestock sector reform. State governments should freeze open...

Rising conflict between herders and farmers in Nigeria is already six times deadlier in 2018 than Boko Haram’s insurgency. To stop the bloodshed, the federal government should improve security; end impunity for assailants; and hasten livestock sector reform. State governments should freeze open...

There can be always such reasoning... But bottomline will be Muslim killed people of other faith not the other way around.