The departure of NATO combat forces from Afghanistan could push India and Pakistan towards a proxy war in the troubled state, Pakistan's former military ruler General Pervez Musharraf warned in an interview with AFP.

As Pakistan's ruler, Musharraf was a key US ally in its 'war on terror', but he now lives under tight security in his Karachi home, facing Taliban death threats and a litany of criminal cases dating back to his near decade-long rule that ended in 2008.

The 71-year-old -- who seized power in a bloodless coup in 1999 -- praised new Afghan President Ashraf Ghani, who made his first official trip to Pakistan last week in a bid to reset fractious ties with Islamabad.

Pakistan's support is seen as crucial to Afghan peace as US-led forces pull out by the end of this year after 13 years battling the Taliban.
But the former strongman said calming tension between India and Pakistan -- running high at the moment after some of the worst cross-border firing in years -- is key to peace in Afghanistan.

Ethnic allegiances
Nuclear-armed neighbours India and Pakistan -- bitter and sometimes bloody rivals since gaining independence from Britain in 1947 -- have long accused each other of using proxy forces to try to gain influence in Afghanistan.

While India has tried to gain traction with the Tajik ethnic group, which dominates in northern Afghanistan, Pakistan has sought to use its leverage with the Pashtuns of the country's south and east who make up the majority of the Taliban.

"If Indians are using some elements of the ethnic entities in Afghanistan, then Pakistan will use its own support for ethnic elements, and our ethnic elements are certainly Pashtuns," Musharraf said.

"So we are initiating a proxy war in Afghanistan. This must be avoided."

Former Afghan president Hamid Karzai routinely accused Pakistan of secretly backing the Taliban as a hedge against Indian influence in his country.

Pakistan denies the accusation, though it was one of only three countries to officially recognise the Afghan Taliban regime, in power from 1996 until 2001 when the US-led invasion resulted in its overthrow.

Musharraf criticised former Afghan president Hamid Karzai for sending officials for training in India and not Pakistan, saying "these small things add up to strategic problems".

Ghani and Pakistani Prime Minister Nawaz Sharif pledged at the weekend to move on from the sniping and bitterness of the Karzai years, with the Afghan leader saying three days of talks had undone 13 years of differences.

But Musharraf warned that regional rivalries could flourish again once NATO's 34,000-strong combat contingent leaves by the end of next month.

"When there is an absence of all these forces, then yes there would be a vacuum... in that case there can be more serious repercussion," he said.

Musharraf said he stands by his decision to ally Pakistan with Washington in the aftermath of the 9/11 attacks.

But he said that the US-led coalition that invaded Afghanistan to oust the Taliban had "failed to convert a military victory into a political victory" when it handed power to Tajiks and thereby alienated many Pashtuns.

Exile to house arrest
Musharraf's home in a well-heeled Karachi neighbourhood is decked with photos of him with world leaders, but his dreams of a triumphant homecoming last year were dashed amid allegations of treason and murder.

He came back to Pakistan in March 2013 after four years of self-imposed exile to run in the May general election, vowing to "save" the country from Taliban violence and economic ruin.

But he was barred from running in the election, and was then put under house arrest and hit with numerous criminal cases -- including treason, the first former army chief to face the charge.

Despite the setbacks, he said he has no regrets about returning.

"The people are for change, there is no doubt in my mind, and there should ne no doubt in anyone's mind that the people of Pakistan, the masses of Pakistan, widely and very strongly want change," he said.
Musharraf warns of India-Pakistan proxy war in Afghanistan - Hindustan Times
Click to expand...

Shunned by his own countrymen, in the iron grip of the law breathing down his neck, he is trying to remain relevant.

He was hardly an ally of the West in the 'War on Terror'. He was more of a lapdog as was perceived by his country, but in actuality hunting with the hounds and running with the hares. He gave sanctuary to Osama bin Laden and other terrorists while extending the begging bowl to the US.

He is raising the bogey of Indian involvement only to justify Pakistani meddling in Afghanistan.

The Tajiks and Hazaras will give Pakistan a befitting reply, if not the Pashtuns.

Let us not ignore the ominous signs originating from Afghanistan. India has virtually refused to supply defence equipment to Afghanistan for a reason.

The former military ruler, General (retd) Pervez Musharraf, has said in an interview that in the absence of normal relations between India and Pakistan, both the countries could enter into a proxy war in Afghanistan after the western troops' withdrawal. Musharraf has accused India of spreading anti-Pakistan sentiments in Afghanistan. He further said that India is training the Baloch rebels in southern Afghanistan, an oft-repeated mantra that still awaits proof. The former army chief has warned that in case of India supporting a partisan ethnic policy in Afghanistan, Pakistan will support the Pashtuns. Musharraf has praised the new Afghan government for its desire to patch up differences with Pakistan to make a new beginning. Supporting his decision to ally with Washington in the war on terror after 9/11, he said that the US has been unable to find a political solution to the Afghan problem because of its failure to form an inclusive government, which alienated the Pashtuns and favoured the Tajiks and others. Any repeat of this arrangement Musharraf believes will bring India and Pakistan to a proxy confrontation on Afghan soil. Musharraf is sceptical of Afghanistan's ability to resist the rebel forces and fill the vacuum left by the US-led NATO forces' withdrawal.

As far as Afghanistan's future is concerned, nothing can be said with finality at this point. But how Musharraf has come to the conclusion that the Tajiks will be dominating the future Afghan government is not clear. If he is referring to the post-9/11 scenario when the US rejected Musharraf's advice to include moderate Taliban in the Karzai government, this shows that the General is still stuck in his way of looking at Afghanistan from a Pakistani defined perspective. Why would a force that the US had come to eliminate have been included in the new arrangement after 9/11? If it was a question of Pashtun representation, Karzai and his supporters were Pashtuns. Insisting that only the Taliban represent the Pashtuns, since there are many Pashtuns who are not Taliban, is a spurious argument. Musharraf has no locus standi to criticise the US or the Afghan government for the political uncertainty in Afghanistan. It was Musharraf's policy to provide safe havens to the Afghan Taliban in Pakistan in spite of joining hands with the US to eliminate them. It was under his reign that the Taliban regrouped to erode the US military efforts in Afghanistan. Pakistan's constant intervention in Afghanistan's political affairs, unlike India's 'soft power' projection, has in fact adversely affected Pakistan-Afghanistan relations. It is about time that Pakistan helps Afghanistan bridge its ethnic differences rather than opening them up for more divisions by persisting in its policy of supporting the Taliban.
Musharraf's shenanigans
Click to expand...

This is from a Pakistani newspaper.

Even in Pakistan, Musharraf's antics come in for ridicule.

But then Musharraf is a shameless chap.

He lost the Quaid Post for Pakistan, he engineered the humiliating defeat for Pakistan in Kargil, he was brazenly power hungry wherein he subverted democracy by a coup and bow that the courts are hounding him, he is trying to 'prove' that he is the sole patriotic Pakistani on Pakistan's soil.

Both India and Pakistan find him a clown and are laughing at him.
J

Infact, Musharaf want to to start the war between India and Pakistan but it is not possible and we don't want to repeat 1965. We want strong relation between both countries like China and Pakistan.

jaheen100 said:
Infact, Musharaf want to to start the war between India and Pakistan but it is not possible and we don't want to repeat 1965. We want strong relation between both countries like China and Pakistan.
Click to expand...

in what context u said above 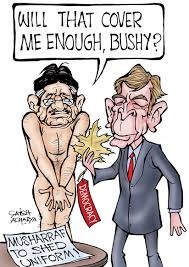 jaheen100 said:
Infact, Musharaf want to to start the war between India and Pakistan but it is not possible and we don't want to repeat 1965. We want strong relation between both countries like China and Pakistan.
Click to expand...

Pakistan is nothing more than an irritant. Pakistan is a mistress which the US and China have been sharing for pleasure.

Musharraf is the Rakhi Sawant of PA and Pakis.

Both are attention whores and both are delusional. 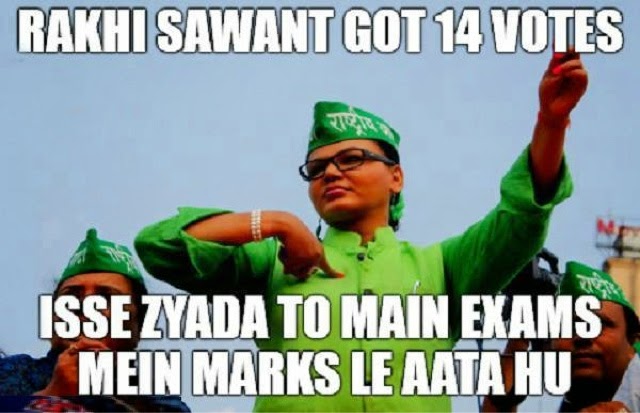 What does Nawaz want to do with Musharraf

Is it quid-pro-qua - what is it exactly. Are they both wanting to continue like this until next elections and new leaders come into place and their previous dispositions are finished and fresh new start for both (pardons for Mushy).

What are they to one another ... Musharraf definitely thinks he is smarter compared to Nawaz (sometimes feel it is true)
You must log in or register to reply here.
Similar threads
General Parvez Musharraf warns India on Aaj Tak channel, 22 Oct 2014
Musharraf warned US about India
Pakistan: General Developments - Musharraf warns of new military coup in Pakistan
University of London cancels Pervez Musharraf's event
Share:
Facebook Twitter Reddit WhatsApp Link