Most ports vulnerable to smuggling of 'dirty' bombs or WMDs: 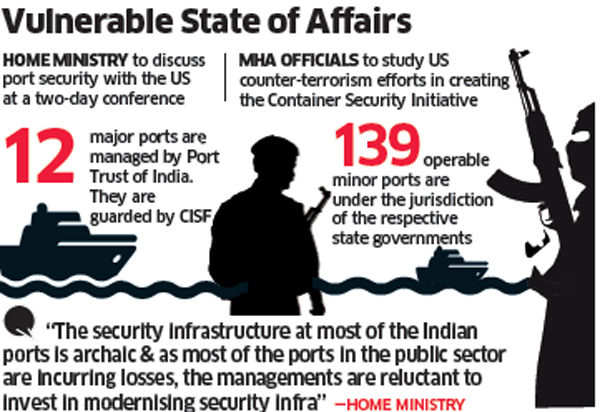 NEW DELHI: The home ministry has raised concerns over the reluctance of ports managed by loss-making state-run companies to invest in modernising their security infrastructure even as they are prime terror targets and vulnerable to smuggling of radiological 'dirty' bombs or weapons of mass destruction.

In a report, the ministry has lamented that IB recommendations to strengthen port security remain unimplemented and most Indian ports are still not equipped with container scanners, radiological detectors, modern access control systems or anti-intrusion devices to strengthen their perimeter security.

The ministry will discuss this issue with the US at a two-day conference that starts on Wednesday. Its officials will study America's counter-terrorism efforts in creating the Container Security Initiative ( CSI), which is a four-element structure in the US for using intelligence and automated information to identify containers that pose a risk to terrorism, pre-screening those containers at the port of departure itself before they arrive at US ports, using detection technology to quickly pre-screen such containers and using tamper-evident containers.

"The security infrastructure at most of the Indian ports is archaic and as most of the ports in the public sector are incurring losses, the managements are reluctant to invest in modernising security infrastructure," the ministry's document prepared for the conference says. It says the "high cost" of inspecting all ship containers and the shipping delays inherent in the process are the "main inhibiting factor" in carrying out the exercise.

The 12 major ports in India are managed by the Port Trust of India under central government's jurisdiction — they are guarded by the CISF — while 139 operable minor ports are under the jurisdiction of the respective state governments. "... Container shipping is an amalgam of many different actors; the exporter, the importer, freight forwarder, customs broker, excise inspectors, truckers, railroad workers, dock workers and the crews of the vessels themselves. This provides many loopholes to terrorist infiltration," the document says.

The ministry says locations of ports in highly urbanised areas and security of their landside perimeter pose a big challenge. "Container ships anchored at port facilities are particularly vulnerable to both hijacking and explosive devices as they are stationary targets. Most crew of cargo ships is unarmed and would be defence-less to an armed attack. Disabling of a ship at port which is blocking a thorough way is enough to halt all activity at the port for an extended period of time," the report says.

Indian officials have in recent past visited the ports in the US to learn about the technology being used there to secure the ports.